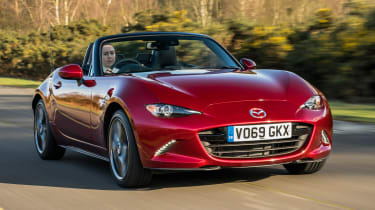 The Mazda MX-5 is still charming to drive and a small car of immense quality, not just from behind the wheel. It’s got real premium brand promise these days, but the price tag now reflects this. While this was once a sports car with value on its side be prepared to spend a bit more for your fix with the 2020 version. Equipment levels have improved and the new GT Sport Tech stands out with luxurious Nappa leather, but at nearly £30,000 it’s dangerously close to the 300bhp plus hot hatch breed.

Mazda has been fiddling with the MX-5 again - another round of updates has been introduced on the firm’s popular small sports car, with the upgrades for 2020 focused on making things much simpler.

Key to the 2020 refresh is a new look line-up comprising just ten variants of the car across both RF and soft-top roadster styles, while there’s new convenience equipment found across a broad cross section of the range, too.

Basic versions of the MX-5 are still powered by a 1.5-litre four-cylinder engine developing 130bhp, but this engine is only available in two trim levels - SE and Sport. Faster 2.0-litre cars, like the one driven here, are offered exclusively in more lavish Sport Tech and GT Sport Tech trims. 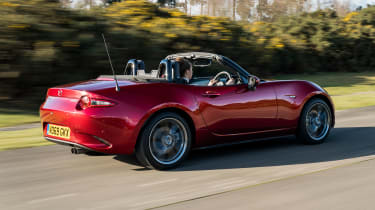 The latter is a new range-topping version of the MX-5 with some aftermarket kudos and a heightened sense of luxury. It comes with all but one of the MX-5’s optional features - foregoing connected services for live traffic data, weather and fuel prices. But it adds some exclusive burgundy Nappa leather seats and stainless steel scuff plates, and 17-inch, black, multi-spoke BBS wheels.

Mechanically, the MX-5 doesn’t move on from the number of revisions introduced in late 2018. That means 2.0-litre cars remain at 181bhp and 205Nm, while manual models are set apart from the rest of the herd with a front strut brace for additional front end rigidity, a limited slip differential and dampers from specialist Bilstein. All soft-top Roadster models use a six-speed manual gearbox, with an automatic transmission only available on the RF versions with a folding hard-top. 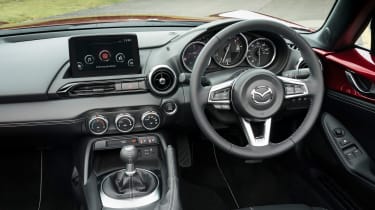 Don’t be disheartened by the lack of change under the metal though. The fourth-generation MX-5 has been pound for pound one of the most fun cars on sale in the UK for almost five years now, and it doesn’t take long to discover this when you climb behind the wheel.

The MX-5 has never been a sports car to place too much emphasis on its engine, but since finding 181bhp from the car’s 2.0-litre engine the format has changed a little, and for the better. 205Nm of torque isn’t an impressive figure compared to the mass of turbocharged hot hatchbacks available these days, but the Mazda’s scant weight means that it makes the most of what it has. Push the throttle into the bulkhead and it takes a while for the engine to rev all the way round to its 7,500rpm redline, but it’s a rewarding task with a ripe exhaust note, and with 0-62mph coming up in 6.5 seconds, the MX-5 has the sort of pace to worry the likes of the Ford Fiesta ST.

The steering feels light and the wheel sits large in the small cabin, which taller drivers will still find a tight fit. But it’s communicative enough. The MX-5 is so placeable - and correctable, if you’re overly keen - and the gearshift is one of the sweetest around. Many performance cars costing twice as much or more fail to engage you with the basics quite as easily as this, if you find a nice twisting stretch of quiet road. 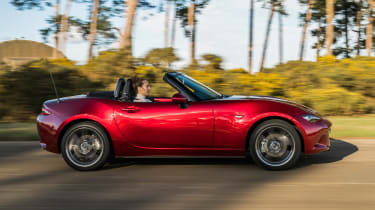 And it’s not uncomfortable either. The damping is stiff enough to make speed bumps and potholes around town a small annoyance, but the flyweight MX-5 settles into a nice frequency when on a roll. As such, on a motorway the only thing that you’ll really notice is the small amount of space inside, the feeling of being sat lower than the rest of the traffic, and the wind noise. But you can easily reel off big journeys.

However, while the driving experience doesn’t change, the buying one certainly does. The line-up is smaller than before but it is more expensive, with the base price of the MX-5 creeping up to £23,795 on the road for the 130bhp 1.5-litre car in SE trim. To put that in context, only 20 months ago the cheapest MX-5 you could buy, with the same engine, was £18,995. The very cheapest 2.0-litre model has leapt from £22,295 to £28,395 in that time. The blow is softer over finance, but there’s no avoiding you’re now expected to pay more per month for the praiseworthy Mazda.

This, of course, can be put down to the level of standard equipment now found on the MX-5, which has increased at a fairly rampant rate. Even the basic SE-L model features LED headlights, heated electric mirrors, heated seats, cruise control, navigation, Apple CarPlay and Android Auto, and a leather steering wheel. And looking at the Sport model, it’s a shame that the 2.0-litre engine isn’t available here - it probably would have been the sweet spot of the new look line up, building on the SE-L’s solid foundations with luxuries such as leather seats and a BOSE surround sound system included alongside the new driver assistance and safety features.