We get exclusive ride aboard top-spec four-door coupe 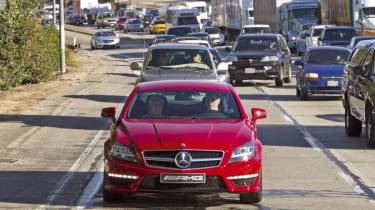 For many, the original CLS was the most desirable Mercedes in well over a decade. It opened up a market for four-door coupés, and offered comfort, practicality and a helping of driving fun. The new car takes the strengths of the original and hallmarks of the current S-Class and AMG SLS to move the design forward. And on the road, this range-topping CLS 63 AMG does the business, blending improved performance and efficiency with real luxury.

Advertisement - Article continues below
From the Los Angeles Motor Show stand to the California highway – Auto Express has got the inside line on Mercedes’ new four-door super-coupe! This is the CLS 63 AMG, and thanks to Tobias Moers – the tuning arm’s product development boss – we’ve been given an exclusive ride around LA, fresh from the car’s launch.
Moers strikes up the mighty V8 engine, and the quad exhausts bellow a song that is pure AMG – less audible from the passenger seat than in the sculpted rear ones. “There are two sound engineers in-house,” Moers says. “The noise is a vital part of AMG ownership.”
Advertisement
Advertisement - Article continues below

As well as getting LED headlamps, the CLS is the first Merc to benefit from electromechanical-assisted steering. Gone is the naturally aspirated 6.2-litre V8, too, in favour of a twin turbocharged 5.5-litre.
By reducing the capacity, adding turbochargers and ditching the engine-driven hydraulic power-steering, the new unit is 32 per cent more efficient than its predecessor.
Advertisement - Article continues below
It’s also faster, with the 518bhp unit propelling the car from 0-62mph in a mere 4.4 seconds. The 700Nm torque on tap is astounding, but it isn’t delivered with any typical turbocharged characteristics. Listen carefully, and you’ll hear a muffled whistle. Emissions regulations mean supercharging is history.
“The CLS only took two-and-a-half years to develop, and the steering was my biggest challenge,” adds Moers. “We had to make the electric system feel as close to a hydraulic set-up as possible, and worked hard on the software mapping. Turn-in to corners isn’t as eager as with RS-badged Audi models – and as someone who used to work as the head of the Quattro department, I should know!”
Although we’re not driving the car, we trust Moers’ judgement. He’s been with AMG since 1994, and was the man responsible for the stunning C63 AMG.
Advertisement
Advertisement - Article continues below
The 55mph speed limit ensures that we remain at a steady pace, but we get a feel for how the CLS behaves. Essentially, it’s an E63 AMG underneath with electronically damped steel front suspension struts and a 24mm wider track. The rear axle features self-levelling air-suspension, and Comfort mode is handled AMG-style – this is no floppy, factory-spec set-up.
Advertisement - Article continues below
The only centre console dial adjusts the AMG Speedshift MCT seven-speed transmission.
C (short for Controlled Efficiency) is an eco mode that softens throttle inputs, shifts gears earlier and activates stop-start.
At first, the latter seems a bizarre feature on such a fast car – especially one with launch control – but it soon becomes second nature. Moers flicks the dial to M (Manual) and sets up the CLS for a corner with an engine blip downshift.
When in M or S (Sport) modes, throttle response perks up, stop-start is disabled and engine remapping alters the exhaust pitch. Sport is fine if the road surface is smooth – it also tightens up the steering feel.
The ESP system has three modes. “When it’s turned off, it really is turned off,” says Moers. “We calibrated Sport mode to allow our drivers to lap the Nürburgring as fast with it on, as off.” What’s really impressive, though, is the fact that the CLS 63 AMG is still a comfortable, luxurious and relaxing executive car when you’re not going flat-out.
Body control feels better than expected, given the length of its wheelbase. It’s nearly as comfortable as an S63, yet it seems as taut and as supple as a Jaguar XFR.
Advertisement
Share this on TwitterShare this on FacebookEmail
Advertisement