The new Mercedes-AMG E 53 Coupe is one of the first 53-badged models to arrive in the UK, but what's it like on the road? 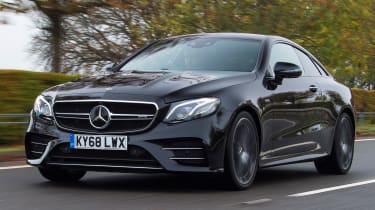 Mercedes’ new 53-badged AMG cars represent a perfect halfway house between the standard models and the fire-breathing 63 variants. The efficiency benefits of the electric compressor are negligible, but the system works well to optimise available performance. The E 53 isn’t the last word in dynamic ability, but as a fast, practical and beautifully built luxury coupe, it makes a strong case.

Mercedes is busy electrifying its entire model range. From the humble C-Class to its S 560 e saloon; a further 10 full-EVs are due by 2022.

But in the melee of it all, the firm hasn’t forgotten about its AMG performance arm. As such, Mercedes has launched a new line of 53-badged models – and this E 53 Coupe is among the very first to arrive in the UK. 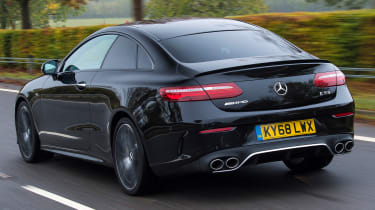 In the real-world, that translates to quite impressive performance. The E 53 won’t pin you in your seat like its V8 siblings, but the way it builds speed is impressive. Bury the throttle on the exit of a roundabout and you’ll hit the national speed limit in the blink of an eye.

But the E-Class Coupe is still a big car with serious heft to haul around. It isn’t the last word in dynamic ability – feeling stable and secure rather than particularly fun. That said, with the 4MATIC+ all-wheel drive system and slick box, it’s more than adept at keeping up with quicker cars on a country road.

But the E 53 is just as happy wafting down the motorway, where it sits quietly and comfortably; the ride isn’t pan smooth over broken surfaces, but it’ll rise and fall beautifully over larger undulations. The E-Class’s semi-autonomous technology makes it a relaxing car to drive long distances, too.

Apart from the improved responses, you rarely notice the 48v system working its magic, however. The engine shuts down earlier than you might imagine as you come to a halt, but there’s no opportunity for zero-emissions cruising or silent manoeuvres around town. 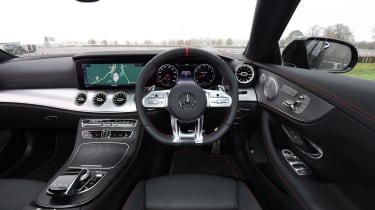 Yet those after a sporty coupe will quickly warm to the 53’s rorty exhaust note. It falls short of the E 63 saloon’s boisterous thunder clap (there’s no AMG E 63 Coupe, by the way), but it’s pleasingly tuneful under hard acceleration.

Of course, the cabin is as exquisite here as it is on all E-Class models, with the 12.3-inch widescreen dials coming as standard on all E 53 Coupes. Our car’s black leather and contrast red stitching is also included, alongside 64-colour ambient lighting and privacy glass.

Externally, 53 models are marked out by their unique round exhaust pipes and AMG badging. The body styling is subtle, complemented by 19-inch wheels and LED lights.