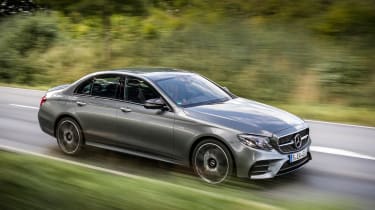 The Mercedes-AMG E43 is a welcome addition to the top end of the E-Class range: our favourite executive car now has a petrol model to take on the Audi S6 and win. It’s good to drive, with loads of grip and a powerful engine under the bonnet, while still being comfortable and luxurious inside. It lacks the magic of a full-fat performance saloon like the E63, and it’s expensive to buy - although it is still cheaper than the S6.

The new Mercedes E-Class has impressed us a lot since it launched earlier this year, and the recently-added Estate version offers an extra dose of practicality into the range. Apart from the Mercedes-AMG E63, which arrives next year, the E-Class range hasn’t really had a sporty top-spec car like the Audi S6 or Jaguar XF S. That’s all changed with the E43 version, however.

This car gets a tuned-up version of the turbocharged 3.0-litre V6 we’ve already tried in the smaller C43, with the 396bhp output being 34bhp up on that model. The torque figure is unchanged, though, at 520Nm. It means the E43 is actually one tenth of a second faster from 0-62mph than the C43 saloon at 4.6 seconds. 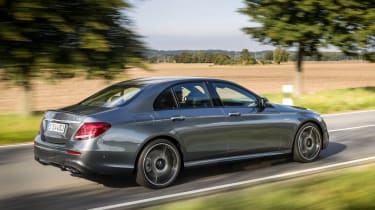 That places it between the Jaguar XF S (5.3 seconds) and Audi S6 (4.4 seconds), though the latter does have a 4.0-litre V8 under the bonnet. All three are priced around the £55,000 mark - making them close rivals. The Jaguar is rear-wheel drive, however, so the 4x4 systems in the Audi and Mercedes give them an off-the-line advantage.

The Mercedes E43 feels rapid in the real world: the V6 engine is very flexible, giving you plenty of performance in any gear. It’s at its best while kept to low revs, using the torque and enjoying a pleasant growl. If you rev the engine harder performance is excellent but it’s not the most exciting engine soundtrack, with a fake-sounding noise in the cabin which is louder than in the C43.

Joining the engine to the four-wheel drive system is a version of the 9-speed automatic gearbox found in all E-Class models, which shifts faster than in the standard versions. It’s an excellent unit day-to-day, with smooth, almost imperceptible shifts most of the time. Put it in manual mode and you’ll find yourself short-shifting, though, as when you shift on the red line there’s a huge lurch. At least the E43 handles all types of driving well enough in auto mode.

As you’d expect, the four-wheel drive system means there’s a huge amount of grip available, giving you loads of confidence to drive the E43 quickly. It does feel large, but there’s enough steering feel to place the car on the road without too much fretting. The wheel is a little light in Comfort mode, but in Sport and Sport+ modes (changed using a dial on the centre console) it weights up nicely. 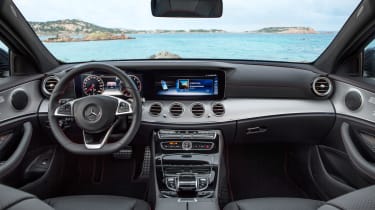 Although we’ve not tried it in the UK yet, the E43 rides nicely in Comfort mode and stiffens up enough to keep body roll in check in the Sport modes, which gives the car an extra degree of all-round appeal.

There’s also an Estate version, which for many will be even more attractive: a 640-litre boot (100 litre more than the saloon, and 1,820 litres with the seats down), four-wheel drive and all the performance you could need all come together in one package. It’s a tenth slower to 62mph than the saloon, but feels almost identical from behind the wheel, if a little noisier inside over rough surfaces. 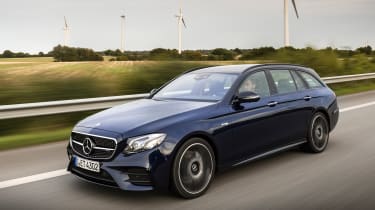 The E43 Estate manages 32.5mpg on the combined cycle with the saloon doing a little better at 36mpg. The saloon’s figures beat the Audi S6 saloon’s 30.7mpg while the Jaguar XF S saloon only manages 34mpg from its own supercharged petrol V6.

All of these cars offer a great balance of ability, but the E43 marks itself out because it’s based on the E-Class, which is our favourite executive car. The high-quality interior is a highlight, with the twin 12.3-inch display screens and spacious seating really impressing. Tech such as Mercedes’ self-driving system, Drive Pilot, being available is a huge plus as well.