Mercedes and Volvo both have strong load-lugging legacies to build on, but can the stylish new E-Class Estate see off the V90? 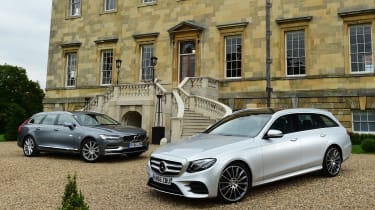 Few manufacturers have the rich estate car history of Mercedes. For decades, the German brand has been delivering versatile load-luggers that combine unrivalled carrying capacity with considerable upper class appeal – so the arrival of a new E-Class Estate is big news. The previous generation was one of the roomiest cars money could buy, so the newcomer has big boots to fill.

However, the initial signs are promising, as the four-door saloon it’s based on is our current executive car champion, having scooped class honours at our New Car Awards ceremony. Combine that car’s style, luxury, comfort and low running costs with the family-friendly versatility of an estate, and you’re surely on to a winner. 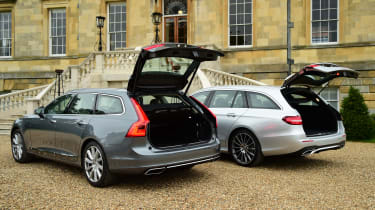 If there’s one firm with an even stronger track record with estate cars, though, it’s Volvo. The brand’s latest flagship wagon is the V90, which arrived only a few months ago and went on to take a maiden road test victory against the Audi A6 Avant. It’s not the most cavernous machine, but its blend of eye-catching design, classy interior, lengthy kit list and thoughtful touches makes it an extremely desirable choice, and a tough rival for the new Mercedes.

So, which of our great estates will carry off the winner’s trophy?

If it’s maximum carrying capacity you’re after, then the Mercedes wins hands down. Its maximum volume of 1,820 litres is not far off some MPV models, while the load area is well shaped. However, it’s the V90 that gets more handy features, such as a boot floor load divider and an automatic load cover.

The Volvo leads the way here with its impressive CO2 emissions figure of 119g/km, which is 1g/km lower than the Mercedes. Yet if you go for the £37,935 E 220d SE, that drops to just 109g/km. This reduction is almost completely down to the  smaller 17-inch alloys. 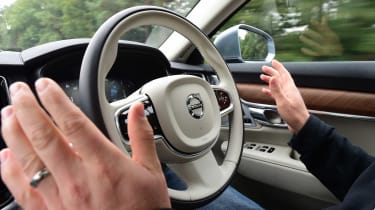 Thanks to its standard Drive Pilot set-up, the V90 can travel at up to 80mph without assistance. A similar set-up is available on the new E-Class, but only as part of the £1,695 Driving Assistance Plus upgrade.

The V90 continues its winning streak. It’s not the most spacious, but it’s big enough and packed with handy features. This versatility is combined with handsome looks, a classy interior and relaxed driving that puts the emphasis on comfort. Factor in the Volvo’s more attractive price, longer list of more desirable kit and more wallet-friendly running costs, and it’s a worthy winner. 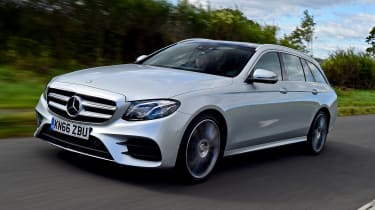 If outright space is top of your list, then the Mercedes E-Class estate is still king. However, this extra capacity comes at a cost – not only is the Mercedes more expensive to buy and run, you’ll have to splash out on options to match the V90’s specification. The E-Class is sleek, refined, beautifully finished and good to drive, but in AMG-Line trim it represents poor value. 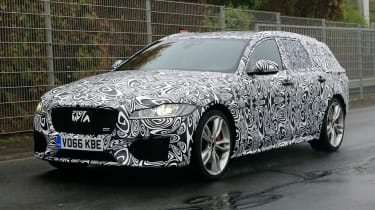 Combining the XF saloon’s style, sophistication and polished drive with an added dose of practicality, the new Sportbrake – revealed in this official spy shot – promises to live up to Jaguar’s old motto of “grace, pace and space”.