We try the facelifted Mercedes GLA SUV in top AMG Line trim. Is it worth the extra money? 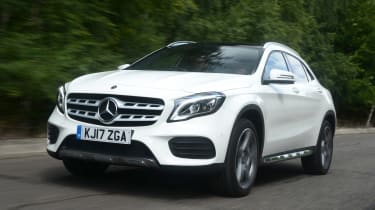 Despite its facelift, Mercedes’ smallest SUV continues to prove that even a company which is enjoying record sales can’t get everything right. There are quieter, more comfortable and more practical small SUVs on offer out there. And if your heart really is set on a GLA, you’ll get something approaching better value further down the range than this high-end edition.

Mercedes didn’t really pull up any tree stumps when it facelifted its GLA small SUV earlier this year. Based on the A-Class, the company’s rival for the Audi Q3 and BMW X1 got a chunkier look and, for the UK at least, comfort suspension, plus a raised ride height.

However, when we drove the car back in April, we concluded that it was still more of a crossover or a beefed-up version of Mercedes’ family hatch than a true small SUV. Our test drive on foreign roads confirmed that it remained firmly in the middle of the pack at best.

Now we’re trying one of the punchier versions of the updated GLA in the UK: the GLA 220 d 4Matic, which sits in the upper half of the line-up. It has Mercedes’ ageing 2.1-litre turbodiesel under the bonnet, producing 175bhp and 350Nm of torque, and feeding it through a seven-speed dual-clutch automatic transmission (there’s no manual option available with the 220 d) and four-wheel drive. 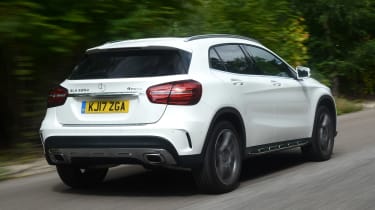 Of course, the facelift didn’t change the GLA’s fundamentals, so its cabin is as cosy or as cramped as ever, depending on your perspective. The interior doesn’t really feel any more roomy than an A-Class’s, with just about enough room for four adults.

Our AMG Line test model features sports seats that are impressively supportive for front passengers – but their hard backs could prove a pain for tall rear occupants. The optional full-length panoramic sunroof does headroom in the back no favours.

There’s a reasonable selection of cubbyholes, though, and the luggage area is a decent size, too, at 481 litres. That’s enough to trump the capacity of the Q3 (420 litres), but a little shy of the space on offer in the X1 (505 litres). 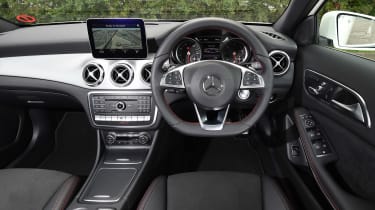 On the road, though, the GLA can’t get close to either of those rivals. It stays pretty flat in corners, although inert and slow steering means it’s not the most involving drive on twisty roads – and it’s cumbersome around town and in tight car parks as well.

While the new suspension does a reasonable job of soaking up big bumps, the GLA still has a habit of finding road imperfections and transmitting the resulting patter through to the cabin. You’ll notice thuds from cat’s eyes, for example. The AMG Line’s 19-inch wheels probably don’t help on this score; we suspect one of the more modest trim levels on 17 or even 18-inch rims would be more compliant.

The engine and gearbox don’t feel particularly well integrated, either, so you get plenty of revs when you’re pulling away from junctions and traffic lights – and that exposes the age-old weakness of Mercedes’ 2.1-litre powerplant: refinement.

The sound of the motor is drowned out by wind and road noise at motorway speeds, but anything other than gentle acceleration anywhere else brings with it a coarse, loud rattle. And this doesn’t really improve once the engine has warmed up, either. In this respect, the diesel Mercedes is behind not only its premium rivals but also ‘mainstream’ alternatives such as the SEAT Ateca and Renault Kadjar.

At least the cabin finish will remind you that you’ve forked out the extra cash for a Mercedes; it’s all well screwed together and there’s a nice blend of quality materials and enough chrome flourishes to give it a premium feel. There are a few too many buttons on the console for our liking, though, and it’s disappointing to see that even AMG Line doesn’t come with proper Mercedes navigation.

Unless you stump up an additional £995, the car gets the more modest Garmin-based system as standard instead – and even though it does include Android Auto and Apple CarPlay, this is hard to swallow on a car that costs the thick end of £35,000 before you add a single option.

Apart from the 19-inch wheels, AMG Line specification tries to make up for this deficit by including exterior styling tweaks to give the car a sportier look. There are also aluminium pedals and a flat-bottomed steering wheel. You get rain-sensing wipers and dual-zone climate control, too.

Fuel economy of 56.5mpg is on par with a comparable X1, although the Mercedes’ slightly higher CO2 emissions put it one tax bracket higher for company car drivers. 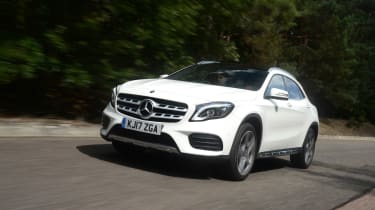 Click on the gallery above to see more of the facelifted Mercedes GLA...