The Mercedes GLC 220 d the pick of the GLC range, but is the facelifted SUV good enough to see off fresh competition from BMW and Audi? 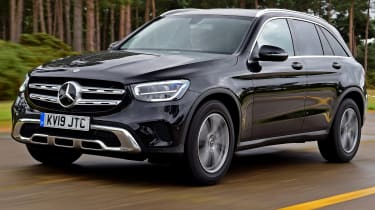 This set of updates add extra appeal to the already capable Mercedes GLC, and as we suspected, this 220 d model is the pick of the current engine line-up. Performance is strong, the drivetrain is smooth and motorway refinement is excellent. We’d steer clear of the Sport trim if you can though, as it doesn’t feel as special as pricier GLC specs. If you can stretch to the larger monthly payments of AMG Line models, we’d recommend it.

The Mercedes GLC first hit showrooms back in 2015, and four years on the Stuttgart brand has introduced a facelifted model to keep it fresh against competition from the BMW X3 and Audi Q5. On our first encounter, we suspected that the smaller of the two diesel engines, the 220 d, might be the model to have. So now we’ve got one back in the UK to see if our initial hunch was right.

All cars get a fresh LED lighting signature, and the bumpers are subtly reprofiled based on trim level. The entry-level Sport driven here gets silver 4x4-effect cladding along its lower edge, while the AMG Line models get a cleaner body-coloured look with a larger front air dam.

The grille sets the Sport and AMG Line variants apart, too: the former gets a twin-louvred design, while the latter features a single span and small silver dots arranged in a diamond pattern. 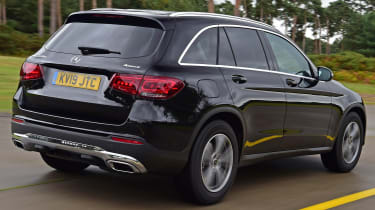 Save for a couple of new interior material options, the cabin design looks much the same as it did before. However, there’s a new infotainment set-up with a larger screen. It houses a sat-nav system which, like that in the latest A-Class, features augmented reality navigation instructions.

However, these features are only available higher up the GLC range. Entry-level models don’t even get Android Auto and Apple CarPlay; it’s disappointing to see software that’s often fitted to basic superminis doesn’t come as standard in a near-£40,000 SUV.

Likewise, the pretty 12.3-inch digital instrument cluster, which is only equipped on AMG Line Premium (the middle of five trims available) and above. Below that, buyers have to make do with analogue clocks with a small digital display between them. The layout is clear but it looks dated and can’t show the level of information of the digital set-up. You still do get the intuitive touch-sensitive pads on the steering wheel to navigate through the various menus, though.

The GLC 220 d is based on the same 2.0-litre, four-cylinder diesel engine as the 300 d, but with outputs of 191bhp and 400Nm, it’s 51bhp and 100Nm down on its big brother. That might seem like a big step down, and it’s a change that translates into a 1.4-second gap in 0-62mph times (7.9 seconds for the 220 d versus 6.5 for the 300 d), but in the real world, the 220 d’s performance still feels more than adequate. It’s helped by the fact that the nine-speed gearbox, shared among all GLC engines, is superb; shifting smoothly and responding quickly. Both sound a little more clattery than the most refined engine options in the class, too.

While the Sport lacks some of the most desirable equipment, it’s the model that makes the most sense for company car users. With AMG Line models rolling on 19 and 20-inch wheels, the 18-inch items allow for a lowly 137g/km CO2 emission rating – that’s up to 7g/km lower than 220 d models on bigger wheels. That’s enough to drop it one band lower for company car Benefit in Kind tax. 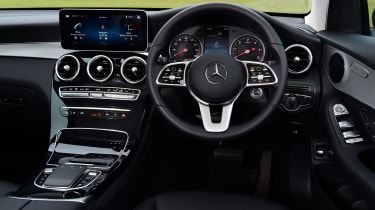 The smaller wheels also help to remove some fidget from the AMG Line cars’ ride comfort, something also helped by a mildly softer suspension setup. Despite the more relaxed settings, the body remains fairly level through the corners – certainly more so than rivals like the Volvo XC60. It isn’t as comfortable as a result, but the GLC remains very relaxing and composed at speed.

Elsewhere the GLC is much the same as before. Cabin space is above average for the class while the (powered) tailgate reveals a 550-litre capacity which expands to 1,600 litres once the back seats are folded away.

That may sound like quite a jump, but many people won’t buy the car outright, instead spreading the cost in the monthly payments of a PCP finance agreement. Based on a representative four-year 10,000-mile deal with a £9,000 deposit (including a £3,600 contribution from Mercedes) the base spec GLC comes to £419 per month. On matching terms, the AMG Line Premium costs roughly £62 per month more.