The Mercedes SLC 180 is the new entry-level model in the range, bringing the sports car closer to the Mazda MX-5's price point 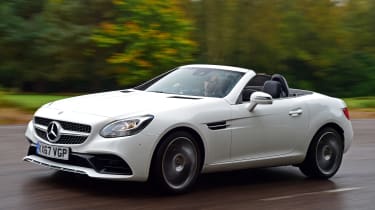 Even at this price, the Mercedes SLC can’t hold a candle to more dynamic rivals when it comes to sheer value for money. The cabin, while well built, is ergonomically flawed by the addition of a manual gearbox, while the new four-cylinder engine feels a bit slow and fails to befit the car’s sporty profile. Merc’s generous deposit contributions and monthly PCP deals redeem things somewhat, but a Mazda MX-5 RF offers a more complete package.

Mercedes sold over two million vehicles around the globe last year, but the SLC (known previously as the SLK) remains a bit-part player in the brand’s success. In fact, sports cars accounted for just 27,000 of the firm’s sales in 2016, representing a seven per cent drop year-on-year.

In a bid to see if new life can be injected into the segment, Mercedes has added an additional model to the SLC line-up. Called the SLC 180, it serves as a new entry-level variant, boasting a turbocharged, 1.6-litre four-cylinder petrol engine mated to a six-speed manual gearbox. It also means that Merc’s Porsche 718 Boxster rival comes with a lower starting price of just £32,039.

While that headline figure seems unlikely to trouble cars like the Mazda MX-5 RF, Mercedes is now offering its baby roadster with enormous dealer deposit contributions if bought on a PCP deal. It means that monthly repayments for the new entry-level SLC are actually cheaper than what Mazda quotes for its range-topping hardtop MX-5. 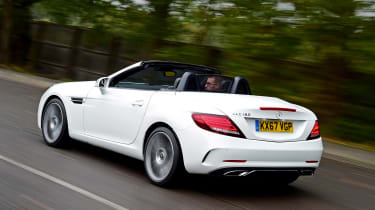 The SLC 180 is offered only as an AMG Line model, however. Keeping options limited to one trim isn’t all too much of a shame, though, as it gives the roadster a sporty look to match its premium badge. It’s kitted out with an aggressive bodykit, 18-inch multispoke AMG alloy wheels, plus halogen headlights with LED daytime running lights.

Of course, the big news with this car is the introduction of its turbocharged engine, which in this guise produces 154bhp. It’s not a new unit, and already features under the bonnet of the A 200 version of the A-Class. But claimed fuel economy is good, with the 1.6 delivering an official return of 48.7mpg. CO2 emissions of 132g/km aren’t too bad either.

In its new role under the bonnet of the SLC, Mercedes has tried to liven the unit up by ensuring it can be heard loud and clear in the cabin. The stifled four-cylinder grunt isn’t the most exciting engine note, but it does at least mean that the entry level SLC isn’t a snoozer. Throttle response is fine thanks to the unit’s 250Nm of torque being delivered at low revs, but progress isn’t fast with 0-62mph arriving in 7.9 seconds. 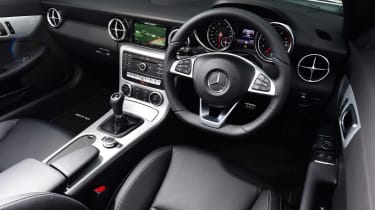 The power to weight imbalance means that the SLC isn’t the most exciting steer. The weight of the steering is fine and the lighter nose feels willing to turn in, but like any other version of the SLC it still lacks the crucial feedback required to goad you into faster driving.

As AMG line is the only trim level, sports suspension and selectable driving modes are standard. However, we found the different settings do little to change the way the car drives, and the stiff suspension setup means that while the car feels comfortable at speed, the ride isn’t flexible and appears quite firm around town. 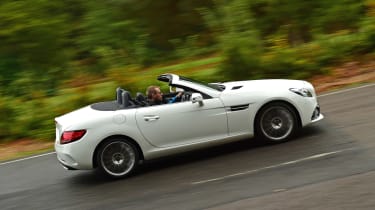 The six-speed manual gearbox doesn’t redeem the driving experience, either. While the throw is nice and short, it’s springy and doesn’t shift quite as slickly as you’d like. It feels as if it’s positioned too far back in the cabin, meaning taller drivers might struggle to get comfortable. Regardless, most buyers are expected to skim over this and pluck straight for the nine-speed automatic gearbox instead – a worthwhile £1,600 option.

Things in the cabin feel well screwed together, but there’s no denying that SLC is showing its age. This car was launched under the SLK nameplate back in 2011, so the huge stack of buttons plastered on the dashboard are a bit old hat in a world of more modern touchscreens.

The infotainment system is lacking too. A seven-inch display is standard on all models, but upgrading the system to feature satellite navigation is an extra £595, while Apple CarPlay and Android Auto compatibility is £250 on top of that.

AMG sports seats are included, but electronic adjustment and seat heaters are on the options list, too. It means that while the SLC 180 is affordable on a monthly deal, you may be disappointed with the level of equipment thrown in. The MX-5 RF is faster, more fun, and features more kit as standard.