We drive the diesel Mercedes SLC roadster in the UK, but is it equipped to challenge a field of talented rivals? 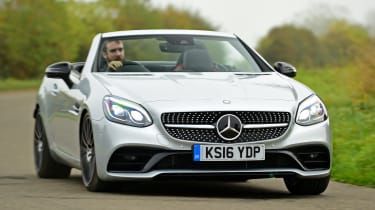 Surprisingly, the diesel version of the Mercedes SLC is the pick of the range beyond the AMG flagship. However, that’s not saying much when you consider that the SLC is pitched against far more talented rivals such as the Porsche 718 Boxster and Audi TT Roadster. The Mercedes is refined at speed and impressively frugal, but the four-seat C-Class Cabriolet isn’t much more expensive and is considerably better to drive. It’s a shame that behind the good looks and new name, the SLC is a car that’s feeling a bit old-hat.

The wind in your hair, the sun beating down, your favourite stretch of road and the sound of a tuneful petrol engine to accompany you – that’s the romantic ideal most people will picture when in the market for a roadster.

But the practicalities and costs of modern life often get in the way, which is why Mercedes expects to shift more diesel versions of its SLC roadster than it will petrols. We’ve driven the new SLC 250 d on UK roads to see if it’s a bruiser or a poser. 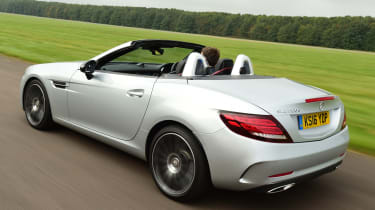 We tried the petrol Mercedes SLC 300, but were underwhelmed by the driving experience. However, the 250 d diesel has more going for it on paper. The headline figure is impressive claimed economy of 64.2mpg, while CO2 emissions of 114g/km should tempt those lucky enough to have a two-seat convertible on their company car list. We found 50mpg was easily attainable, although if economy isn’t your sole priority, then maybe the car’s 500Nm of torque will be a draw, too.

The engine producing that figure is Mercedes’ ageing 2.1-litre four-cylinder, rather than the new 2.0-litre diesel found in the latest E-Class. Previous experience tells us it’s not the most refined unit, and that’s proven on start-up, when a coarse clatter emanates from under the bonnet.

Thankfully it’s surprisingly subdued and smooth once you’re up to speed – and stays that way until you get above 3,000rpm. Mercedes hasn’t tried to engineer a fake sporty exhaust note like some rivals, either.

Not that you’ll be needing to rev it much. Maximum torque is available from 1,600rpm, and the SLC feels pleasingly brisk most of the time – a 0-62mph time of 6.6 seconds reflects that. It makes for a good motorway cruiser, too, while wind and road noise suppression is decent, thanks to the folding metal roof. 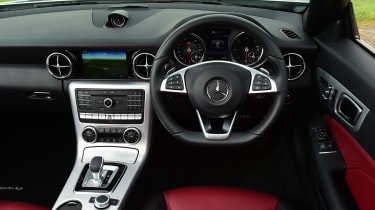 Unfortunately, that’s largely where the good news stops with the diesel SLC. On the road, it suffers from the same issues as the petrol-powered car, which are only made worse by the heavy diesel over the nose. The steering is well weighted but completely numb and vague around the straight ahead, and the 1,605kg kerbweight makes itself felt as the Mercedes lumbers into bends with little grace or involvement. A Porsche 718 Boxster is more fun, while the front-wheel-drive Audi TT Roadster diesel has greater dynamism.

Don’t think the trade-off is a soft ride, either. Our car featured the £995 Sport Pack with adaptive damping, yet the ride ranged from fidgety in Comfort mode to jarring in Sport. Around town, the lack of body stiffness shows as the car shimmies and crashes over potholes. At least it’s smoother the faster you go, and as a result the SLC is a decent motorway mile muncher.

Despite a new name, the SLC is feeling its age in areas. The roof is secure, but it’s slow to operate, while the dashboard design looks old when compared with newer Mercedes. It’s not all that spacious for taller drivers inside, and our test car totalled more than £50,000, because you have to add many options that you otherwise might expect in top-spec AMG Line trim.