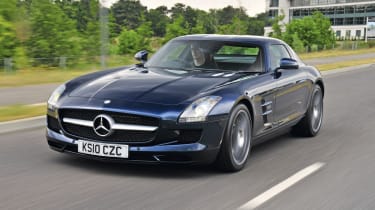 For its first shot at a supercar, AMG has produced something truly astonishing with the SLS. The retro-inspired gullwing doors have an unashamed wow factor, but there’s nothing old fashioned about the way the SLS drives – it even has a big boot. What’s more remarkable, though, is how easy it is to extract every last drop of its performance, thanks to an incredible engine, quick and intuitive gearbox and powerful brakes. Supercars are all about creating a sense of occasion every time you go for a drive, even if it’s simply popping to the shops. And it’s in this area that the SLS knocks spots off its established rivals. Ferrari and Lamborghini have a potent rival on their hands.

Building a supercar from scratch isn’t easy, but Mercedes’s in-house tuning arm, AMG, has an ace up its sleeve.

As with the original 300 SL, which wowed the motoring world 55 years ago, the doors are hinged at the top and sweep dramatically upwards – the Gullwing is back and it’s landed in the UK.

Unlock the car with the key fob, and a small handle pops out from the bottom of the door. Pull it, and the legendary gullwing door swooshes skywards to reveal an understated interior that’s brimming with exquisite detail.

Sat low in the supportive sports seats, the door is quite a stretch to reach, but it swings back down with ease. The only downside to the gullwing set-up is that it impinges on headroom slightly, so the heads of tall drivers might brush the roof.

The range of adjustment for the seat and wheel is as good as any Mercedes, and while the switchgear for the indicators, mirrors and electric windows is carried over from lesser models, the overall ambience of the leather-clad cabin is reassuringly expensive. Sat-nav, heated seats and AMG dials are standard, while unique details include four retro vents and an aluminium centre console. Other important features include the T-shaped gear selector, a dial for selecting different driving modes, and the all-important AMG button, which can be set as a shortcut to the driver’s favourite parameters.

The console also houses the starter button, which flickers in time with the engine as it barks into life. The unit is the same hand-built 563bhp 6.2-litre V8 that’s been fitted to AMG products before. However, for the SLS, it’s been given a thorough reworking, and now features new forged pistons and a reinforced crankshaft. It’s connected to the firm’s first seven-speed dual-clutch gearbox, which is operated by steering wheel-mounted paddles. The car’s aluminium spaceframe chassis is also made by hand, helping to keep weight down to 1,620kg.

On the move, it’s clear that the SLS packs some serious punch. At low speeds, manoeuvring in car parks and driving around town, the gearbox is clunky and first gear takes a while to engage. The ride is also firm, and its huge wheels – 19-inch at the front and 20-inch at the rear – don’t help. Yet the trade-off for the low-speed jerkiness is supreme stability once the road opens up.

The SLS is a wide car, and you sit a long way back in the wheelbase, peering down the sculpted bonnet. But once you get used to that, the SLS is remarkably easy to drive. The steering is very precise, feeding back the cambers in the road.

Weight is distributed 47:53 front to rear, giving stunning balance, while grip is exceptional. At high speeds, the extra stability provided by the pop-up rear wing boosts the car’s grip even further. The suspension set-up provides excellent body control, damping the worst that a twisting British B-road can throw at you. But the engine is the star of the show. It sounds fantastic as it thrums away, with a muscular power delivery that pulls hard in every gear at any rpm. There’s even a wicked crackle and pop as you back off the throttle.

As the pace quickens, the gearbox shifts seamlessly, ensuring that none of the 563bhp is wasted. In manual mode, there are F1-style shift lights on the dash to make sure the car meets its potential. Motorsport-derived brakes are impressive, too, offering plenty of stopping power.

Anyone who thought AMG’s first foray into Lamborghini and Ferrari territory would be all show and no go is sorely mistaken. The SLS is every inch a true supercar.