First report: the MINI Electric has been handy for trips to the shops during the lockdown

We’ve already found lots to like about the MINI Electric and are looking forward to spending the next few months behind the wheel. It’s proved to be the perfect lockdown partner, but we wonder whether the EV’s short range will pose problems in the future.

Full disclosure: the car you see here wasn’t supposed to be the Auto Express MINI Electric. We planned to take delivery of a fully loaded Level 3 car, but with lockdown measures brought in before it arrived, we held on to a mid-spec model instead.

It’s the same car that featured in the MINI’s road test debut, where we pitched it against the latest Renault Zoe. While the MINI was beaten in that outing, we’re looking forward to unpicking the new EV as we live with it over the coming months.

I’m pleased the top-spec car has been switched for the more affordable Level 2 model. The trim structure really is as simple as one, two, three – the higher up the range, the more kit and features you unlock. 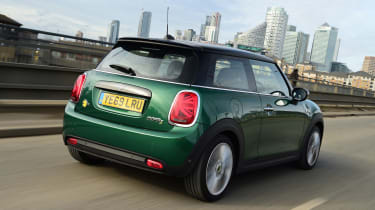 Standard equipment is generous, though. All cars include sat-nav and Apple CarPlay (but Android Auto isn’t even an option), as well as MINI’s latest range of ‘Connected’ services, including live info on public charge point locations. Dual-zone climate control is included, as is cruise control, and a digital instrument cluster that’s also seen on the flagship MINI GP.

Step up to Level 2 (£2,000 extra) and you’ll open up a range of colours – each of which can be paired with a contrasting roof. This British Racing Green paint isn’t available on the basic model, and nor are the Tentacle Spoke wheels. Level 2 also gains heated seats, a parking camera, keyless operation and the Driving Assistant Pack with traffic sign recognition and auto high beam.

I’d have stuck with the ‘Electric Spoke’ wheels; a defining MINI Electric feature, they were designed to mimic a three-pin plug. These look great, and along with the yellow details, ensure there’s no mistaking the EV for its petrol sibling. Still, our car’s rims don’t detract from the classy look. 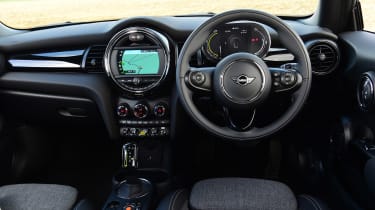 Level 3 commands a further £4,000 on top. These cars get a larger sat-nav screen (the set-up in our car is big enough, I reckon), plus a Harman Kardon stereo, head-up display, panoramic roof and leather seats. These are luxuries, I think – so save your cash and spend it on something else.

And now for full disclosure, part two: although the twin test was shot a week or two before the UK went into lockdown, the MINI has since done little more than tootle to and from the supermarket. In truth, we’ve wished for little more during this time; the short range – officially 144 miles, though nearer 100 miles in practice – is certainly sufficient for a trip to the shops, and charging once a month is no hardship.

Of course, that range may be cause for concern when the government relaxes its restrictions and the world goes back to normal; for me, a week can include a couple of days in our London office, followed by another flying from Heathrow, or down at our test track, so I foresee a more rigorous test of the EV’s versatility later. 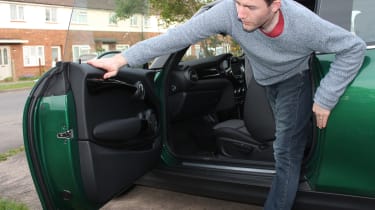 Furthermore, I take particular issue with the fact the MINI Electric is only available in three-door form, despite the fact it sits on the same platform as the firm’s five-door petrol hatch, too. With a baby on the way, I can see this becoming an ever-pressing issue as I fumble with child seats and seat belts through the three-door’s tight opening. My colleague Joe thinks the same, as he found recently when trying to clamber into the back of the MINI’s cramped cabin.

But that’s a minor gripe, because the MINI excels when you get it out on the road. Even to and from the supermarket the Electric feels quick, agile and fun. I love the sharp steering, and the ride isn’t too firm, either.

Like all of us, I’m looking forward to things soon resembling some form of normality – at which point I can explore exactly what the MINI Electric is all about.