Third report: Our estate is nearly as much fun as the hot JCW hatch 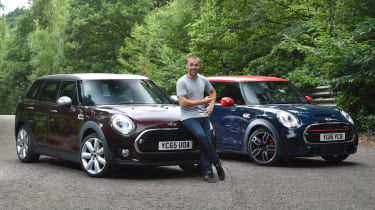 The Clubman continues to prove that compact hatchback models can be fun as well as family friendly. Like all MINI’s cars it’s great to drive, well built and packed with kerb appeal. And while a JCW is ultimately faster, it can’t match the all-round appeal of our five-door machine.

On the face of it, the two MINIs in the picture above are like chalk and cheese. On the left is our Cooper D Clubman, which majors on practicality and frugality, while on the right is the firebreathing, fun-seeking John Cooper Works flagship. Yet despite their very different design briefs, both cars leave an equally big smile on my face.

You see, for many drivers – including me – one of the highlights of MINI ownership is the thrilling driving experience. No matter which model you choose, all the firm’s cars have been developed to entertain. As a result, our Clubman is every bit as rewarding from behind the wheel as the 228bhp JCW.

Yes, the five-door machine rolls a little more in corners, and its diesel engine doesn’t have the rasps and growls of its counterpart, but sharp steering and acrobatic agility are present and correct. And while the 2.0-litre diesel is short on charisma, its muscular 330Nm torque output delivers hot hatch-rivalling pace. 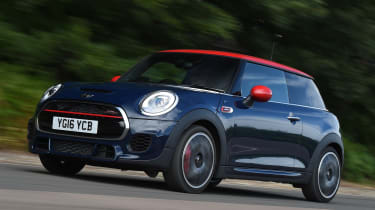 This ability to entertain means that I often seek out interesting routes to photo locations, rather than plodding along the motorway. Not that the Clubman isn’t a comfortable cruiser – in fact, this is one of the many areas where the estate gains an advantage over its high-performance brother. A softer suspension set-up and long sixth gear mean our car is far more relaxing than the firm and frenetic JCW.

Yet it’s the Clubman’s practicality that’s really making its mark. As a photographer, I rarely travel light, so I’d struggle to get half my gear into the JCW’s tiny 211-litre boot. However, the Clubman’s 360-litre load bay accommodates my various camera cases and cleaning kit with a little space to spare. And because there are extra doors, I can just about squeeze four friends into the reasonably roomy interior – you definitely can’t do that in the JCW.

Yet while the Clubman is a super-sized MINI, it still feels surprisingly compact. I’ve recently moved to London, and the car feels as much at home on the capital’s traffic-choked streets as it does on the open road. I’ve even had some appreciative comments from my new neighbours, who have praised the car’s slightly bulbous looks.

t hasn’t been all plain sailing for the Clubman, though. The rear bumper was left scratched and misaligned following a light tap from another car while sat in traffic, and the alloys have attracted a few battle scars – hardly surprising given that the rims and spokes of the optional 18-inch wheels sit proud of the tyre sidewalls. I’ll be looking to get these cosmetic blemishes sorted over the coming weeks.

In the meantime, I’m going to carry on enjoying the Clubman’s ability to put a massive smile on my face. 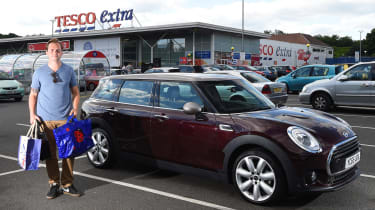 With the introduction of the five pence carrier bag charge across England, I’ve had to resort to carrying a couple of bags for life in our MINI Clubman to stop me from going bankrupt. I haven’t turned into a shopaholic, and I’m certainly not stockpiling food for some impending apocalypse. No, the reason is that I just can’t seem to find enough excuses to get behind the wheel of our supermini estate.

MINIs have always managed to deliver entertaining handling, and our Cooper D Clubman is no different. The 148bhp 2.0-litre diesel engine has plenty of power, while the sharp chassis means every journey is entertaining. As a result, my kitchen now looks as if I am preparing for some sort of doomsday scenario, and I’m now the first person to raise a hand if anyone is in need of a lift.

Even better, the estate-style body means that if something happens to need transporting, regardless of size, weight or distance, the Clubman can cope. Just don’t expect fragile items to survive intact, as the car positively encourages you to attack corners on every journey. It doesn’t matter if I’m hitting the open road or dealing with a congested five-minute trip to the shops, the MINI’s fun factor always puts a smile on my face.

In my first report, I was a bit negative about the Clubman’s looks, and while I still don’t think it’s the most elegantly styled model in the Auto Express car park, the rear three-quarter angle is probably its best feature. The tail-lights look smart and the barn doors are a unique feature that makes it instantly recognisable.

Where the Clubman does hold visual appeal is from behind the wheel. As standard, it’s pretty ordinary, but the cabin features plenty of high-grade materials, and the metal toggle switches on the centre console are appealing. 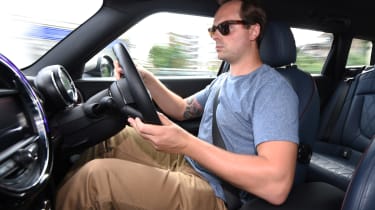 Like most MINIs, our car has benefited from the vast number of personalisation options available. Its blue leather is a subtle touch, while the diamond-quilted stitching gives it an almost Bentley-like upmarket feel.

The changeable LED mood lighting really helps to create a nice atmosphere, too, especially when driving in low light. The colours range across the spectrum, but I especially like the cool blue and purple shades, as they deliver a calming cabin ambience. Another neat touch is the tartan-style finish to the door bins and cup-holders, which again give the interior an upmarket feel that goes some way to justifying the MINI’s price tag.

So it’s a great place to spend time, which is a bonus, but for me the MINI’s appeal always comes back to how it drives. Our car’s Driving Modes switch flashes up a go-kart when you select Sport mode, and the balanced chassis and low-slung driving position mean the Clubman really does feel like one when you drive it. 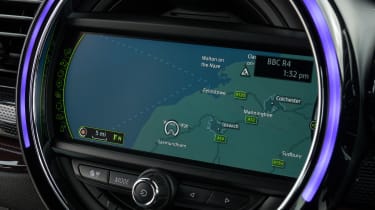 The six-speed gearbox has a precise shift to make the most of the engine, and only the diesel drone takes away from its powerful responses.The sharp steering delivers plenty of feedback, too, and our only real niggle with the way the Clubman drives is rearward visibility, as those barn doors do restrict your vision out the back.

Now, where did I put those bags for life? I feel another shop coming on... 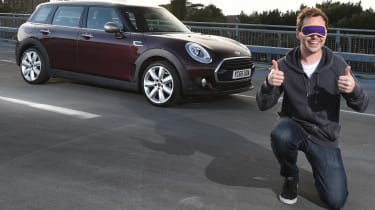 It's fair to say that when I first clapped eyes on the new MINI Clubman, it wasn’t a case of love at first sight. I was a  big fan of the practical predecessor, which elegantly incorporated an estate rear on to the cheeky MINI hatch, and included the quirky single door for rear seat passengers. But the latest car looks bloated and bulbous.

However, I’ve always been taught “never judge a book by its cover” – and that’s true of our new Cooper D Clubman. I’ve tried to improve the looks by adding larger 18-inch alloys (£1,145), Pure Burgundy metallic paint (£515) and a grey contrast roof (£125), but it’s inside that the car has won me over. The blend of retro design cues, quality and practicality makes it something to savour.

Admittedly, I’ve gone a little bit overboard with the options, but it’s difficult not to get carried away with MINI’s online car configurator. For starters, I’ve added the garish Chester Indigo Blue leather trim and figure-hugging sports seats, which  in combination cost a hefty £1,715. 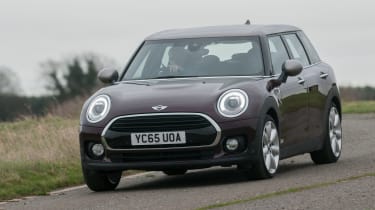 You can’t really order a MINI without investing in one of the option bundles, so I’ve gone for the  £1,385 Chili Pack that includes LED headlamps, keyless entry, heated seats and much more. Finally, I’ve ticked the box for the £1,010 Media Pack that features sat-nav and connected online services.

• How NOT to spec your car

But even without these options,  the Clubman feels right once you’re aboard. The low-slung driving position is perfect, while the bank of toggle switches on the centre console and large circular display on the dashboard are a neat nod to the Fifties original. Modern touches extend to the classy backlit door-pulls that glow in a multi-coloured pattern at night, plus  the intuitive infotainment rotary controller that sits between the front seats.

The quality of the cabin is first-rate, too. Top-notch plastics are used throughout, while the fit and finish are superb. With options, our car costs a whisker over £30,000, but sat behind the wheel, it  feels like it’s worth this heady amount. 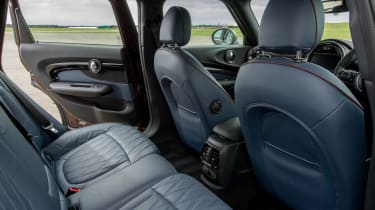 I’ve been impressed by the practicality of this super-sized MINI. Yes, I miss the suicide rear door of the old car, but these conventional openings are much easier  to use. Inside, there’s far more head and legroom, although it still trails the VW Golf.

At the rear, the Clubman’s trademark twin barn doors have been retained. When closed, there’s a thick central pillar that restricts visibility, but opening the doors reveals a useful 360-litre boot. That’s about average for the compact family hatchback class, but it’s more than big enough for all my camera equipment. For even more space, there’s a 40:20:40 split rear bench, too. 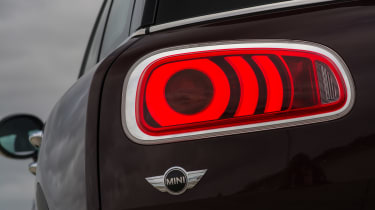 However, the best part of MINI ownership is the driving experience. I’ve only covered a handful of miles in the Clubman, but already I’m smitten with its infectious character. Scaling up the external dimensions hasn’t dulled the Clubman’s appetite for fun, as it dives through corners with a puppy-like enthusiasm, and the 2.0-litre diesel delivers a decent punch.

Yet these sharp dynamics don’t come at the expense of refinement, as the MINI is quiet and composed at a cruise. So, initial impressions of the Clubman are very good indeed. I might even come to like the looks...