Is new performance flagship estate as much fun as hatchback version? 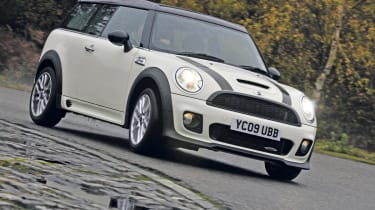 The JCW Clubman is great fun to drive. Thanks to the longer wheelbase, it’s more stable and composed than the flagship hatch, yet just as responsive. Combined with the mighty punch from the 208bhp 1.6-litre turbocharged engine – which also delivers impressive fuel economy – the newcomer serves up a simply sensational driving experience. Factor in some useful extra luggage space over the three-door, and you’ve got a very desirable hot hatch.

Bosses at MINI have mixed their most practical bodystyle with their most potent engine – and this is the result! The Clubman has undergone a full John Cooper Works conversion, and been transformed from a quirky estate into a hot hatch. But can it live up to the expectations of the badge on its boot?

Under the bonnet is a 1.6-litre turbocharged engine, derived from the John Cooper Works Challenge race car, and shared with the JCW hatch and Convertible. It delivers 208bhp, and propels the hot Clubman from 0-62mph in 6.8 seconds. That’s three-tenths slower than the hatch, but with the exhausts booming and popping behind you, it makes the regular Cooper S Clubman feel pedestrian.

The styling has been updated too, and the overall effect is even more striking than the hatch. At the rear, the wide-set exhausts and side-hinged van doors are unlike anything else on the road. An aerodynamic bodykit and 17-inch alloys – weighing less than 10kg each – not only look the part, but help boost performance. And if anyone was in doubt about this MINI’s potential, John Cooper Works badging on the lower front grille, wheel hubs and boot complete the makeover.

As with the rest of the Clubman range, the wheelbase is 80mm longer than the hatch’s – but with the JCW, this makes all the difference on the road. Stability in corners and traction are improved, which is hugely important when you’ve got more than 200bhp going through the front tyres.

The torque steer that plagues the hatchback version appears to have been reined in. Floor the right pedal mid-bend or encounter a rough surface, and you’ll still wrestle with the wheel, but it feels more playful and less of a fight.

Push the Sport button and throttle response sharpens up, while the steering becomes even weightier. But this adds nothing to the amount of feedback through the wheel; it only amplifies the torque steer. We wish you could have the improved throttle feel with the lighter steering setting.

Alongside the Sport switch is a button marked DTC. Leave it alone for full traction control, push once for ‘dynamic’ mode, or press and hold to turn it off altogether. The middle setting is perfect for the average driver when the pace picks up – allowing enough slip to stop the power being cut mid-corner, but keeping you out of trouble at the same time.

Turn the system off and it will brake the spinning inside wheel in bends, mimicking a limited slip diff, and help the MINI find more traction and accelerate harder out of corners.

A firm ride is to be expected from a car in this class – and the Clubman is certainly stiffly sprung. Speed bumps and imperfections in the surface send jolts through the cabin. But on fast, sweeping B-roads, the trade-off is superb body control. It’s also supple enough to prevent long motorway journeys from becoming a chore. If this isn’t extreme enough for you, a rock-hard JCW chassis can be specified as an option – this lowers the suspension by 10mm and firms up the dampers.

The JCW isn’t cheap – it costs more than £22,000 before you’ve added anything from MINI’s famously long options list. And it has all the usual Clubman quirks, such as that single suicide door behind the driver, plus a boot which is smaller than a Ford Fiesta’s.

However, for £1,000 more than the JCW hatch, the Clubman does combine greater flexibility with a more polished driving experience – and in this respect, it makes a lot of sense.