Third Report: New meets old as we line up hot hatch against first-ever production Mini to leave the factory 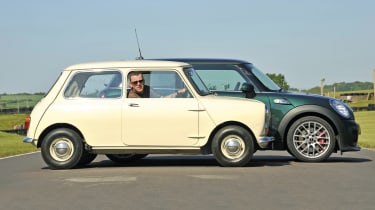 It has more than six times the power, weighs twice as much, gets from 0-60mph 23 seconds quicker and offers double the top speed – our racy John Cooper Works has little in common with the original Mini.

But the genius of the modern version is that it manages to recreate the fun factor, style and charm of its illustrious ancestor in a thoroughly up-to-date package.

The car alongside our long-termer in this picture is 621 AOK – the first production Morris Mini Minor to roll off the line at Cowley, Oxford, in 1959.

During the photoshoot for our MINI special, I had the privilege of driving it – and got a fascinating insight into the world of motoring half a century ago.

This was a real thrill, but it was good to get back in the 2009 MINI. Over the last five months and 5,059 miles, I still have nothing but praise for our British Racing Green JCW.

And I have to admit that it’s hard to keep it looking its shiny best.

But I think this finish gives the hot hatch an understated and grown-up style.

And its low-key design is the perfect foil for its raucous character, lively handling and serious performance.

The JCW showed its true colours on a recent road trip.

The journey north west to our annual Performance Car of the Year test in Anglesey reminded me just how accomplished the MINI is.

Included in our group of 20 of the best drivers’ models were several supercoupés, but all our road testers still loved the Cooper.

This was especially true on the narrower and twistier sections of our route across North Wales.

It wasn’t even involved in the test, yet it was a big hit with our team on the way there.

Not only that, but thanks to its retro cabin, great optional sat-nav and well thought-out controls, I find the JCW just as good to live with day to day.

The seats are very comfortable on long trips and also provide plenty of support in corners. I love the Alcantara sections on the chunky steering wheel, too.

In fact, the feelgood factor even manages to make my daily commute across south London seem bearable.

And aside from a loose bonnet retaining catch that was an easy DIY fix (as I mentioned in a previous report), it’s been faultlessly reliable, too.

Yet there are some compromises to running a MINI.

The tiny boot means anything but the smallest of loads requires you to fold the rear seats.

Plus, the ride is firm.

Still, these aren’t big prices to pay for a great hot hatch that does its 50-year heritage proud.

The JCW is a cracking hot hatch that’s a riot to drive on the right road.

But I’m less keen on the optional sat-nav.

I’ve no complaints about its display, which is neatly integrated into the centre dial.

It’s the joystick controller set in front of the gearlever that I dislike. Ross Pinnock Road test editor