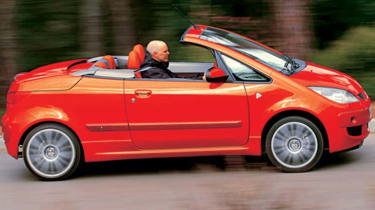 A coupe-cabrio supermini is not a new idea, but Mitsubishi has made the first one likely to appeal to keen drivers. Having a more muscular stance than rivals, the C-C is the best-looking Colt yet. With the maker promising the drop-top will match its hot CZT hatchback for pace while remaining competitively priced, convertible fans have a treat in store.

Built by the Italian firm Pininfarina, Mitsubishi's newcomer - currently called Coupe-Cabriolet - will move away from the less sporty image of rivals such as the Peugeot 206 CC. To help attract keen drivers, the C-C will get Mitsubishi's 147bhp turbocharged engine at launch, making the model the hottest baby cabrio on the road.

The 206 CC has been the Japanese firm's benchmark, and the Colt even looks like its French rival from the back. Its large flat panel is necessary to house the folding hard-top's mechanical parts, and forces designers to start work from the rear and move forwards.

But the C-C takes on a character of its own the more you view it. The raised rear brake light also acts as a mini boot spoiler, and the gap between the folded roof and back seats is left open, giving the illusion of a shorter, sportier rear. The high waistline, forward-set driving position and aggressive stance complete the hot look.

Although this two-door uses many of the components of the three-door, the C-C is actually based on the length-ened running gear of the five-door model to give sufficient space to stow the folding hard-top. And that means there is room for two rear seats, which help increase the car's versatility.

While the base of the chairs is short and the backrest uncomfortably vertical, there is sufficient space for a couple of under-10s or taller passengers for a limited time. Elsewhere, the cabin is the same as the hatchback variant's, and bosses are even investigating putting the funky, illuminated colour-coded centre console into production. From behind the wheel, the C-C feels pretty much like the hatchback version, with the stubby bonnet making the car easy to manoeuvre and place on the road.

Although the example we drove was a precious prototype, it was still fitted with a 1.5-litre turbocharged engine, and despite having to watch our speed, the unit displayed plenty of verve. On the move, comfort in the cabin was impressive. The suspension delivers a fine ride quality, and while the C-C shares its nose with the five-door, the windscreen has been extended to limit buffeting when the roof is down.

And mighty effective it is, too, ensuring that even when the side windows are lowered, wind noise is not excessive for occupants. Final decisions about engine options and pricing are yet to be announced, but Mitsubishi's engineers insist that although 120kg has been added to the car's weight to incorporate the roof, they have done their utmost to minimise any effect on performance. If they have got their sums right, that could rocket the Colt to the top of the coupe-cabriolet sales charts.