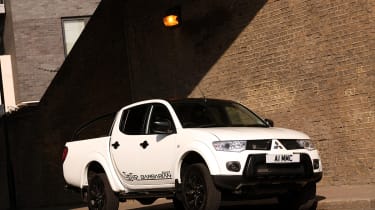 The L200 Series 4 was launched in 2005 and consists of single, club and double-cab models, with the 4Work and 4Life ranges aimed at work users. 4Life and 4Work models are the only single and club-cab models available, all others – Trojan, Warrior, Barbarian and Walkinshaw – are better equipped double-cab models.

All come with part-time four-wheel drive and, except the 4Work and 4Life models, all are equipped with Mitsubishi’s Super Select four-wheel-drive system. Mitsubishi has made the longer load box that was introduced a few years ago with the double cab standard on all double-cab models except the Trojan.

A five-year/125,000-mile warranty was introduced for all L200 models in 2012. Standard equipment includes driver and passenger airbags. 4Life and higher-spec models gain air-conditioning.

All L200 Mk4 models are powered by Mitsubishi’s 2.5-litre common-rail diesel. It produces 134bhp for the 4Work and 4Life ranges and 175bhp for the higher-spec double-cab models. A five-speed manual transmission is standard with a five-speed automatic optional with the 175bhp engine.

134bhp models return combined fuel consumption of 36.7mpg (with CO2 emissions of 204g/km) unladen, which is not as good as the 125bhp Ford Ranger or Isuzu D-Max, but better than the Nissan Navara or Land Rover Defender 110. The 175bhp engine returns 36.7mpg, combined (204g/km CO2 emissions). Economy in the low 30mpg range should be realistic on-road. Nine-thousand-mile service intervals are shorter than most rivals, which include the Ford Ranger, Isuzu D-Max, Land Rover Defender and Nissan Navara.

The L200 is rated in groups 8E to 10E for insurance – that's lower than the Ford Ranger or Nissan Navara, but higher than the Volkswagen Amarok in groups 7E to 8E.

The L200 body options include single cab, double cab and extended club cab – the latter is effectively a longer single cab with a pair of folding seats for occasional use behind the front seats. Single-cab models provide a 2,220mm-long load box, which is shorter than the Ford Ranger or Isuzu D-Max. At 1,805mm long, the club cab load box is also one of the shortest, but longer than the Isuzu D-Max.

For the double-cab models, the 1,505mm-long load box fitted to most is longer than the D-Max, but the Trojan model is fitted with the shorter double-cab load box, measuring 1,325mm in length. Only the Land Rover Defender 110 double cab pickup offers a shorter load box. At 1,470mm, the L200’s load box is also narrower than most major competitors, except for the Land Rover Defender 110 pick-up, which is between 800 and 1,160mm wide. The payload allowance is competitive with rivals at 1,045kg - 1,120kg, and ensures that the club-cab and double-cab models would qualify for a refund of VAT for registered customers.

While the braked-trailer towing capacity of 2,700kg would have been generous a few years ago, only the D-Max and some single-cab Ford Ranger models now offer a lower capacity. It’s worth noting for business use that if the gross weight of the truck and the trailer combined are greater than 3,500kg, a tachograph may need to be fitted for towing. With a gross weight around 2,900kg for the L200, depending on the model, it means that it should be possible to tow a trailer with a gross weight approaching 500kg without a tachograph. Consult a dealer or supplier if you intend to tow for business.

A range of accessories is available from Mitsubishi and other suppliers, including everything from load liners to tonneau covers, hard tops and towing equipment.

The L200 scored four stars in its Euro NCAP test in 2008, when it was one of the first batch of pick-up trucks to be tested. It was the only pick-up to be awarded four stars at the time. The latest tests include safety assistance systems, such as electronic stability control (ESC), which were not tested back in 2008. Unfortunately, ESC or M-ASTC (Mitsubishi Active Stability and Traction Control) is only standard on Warrior, Barbarian, Barbarian Black and Walkinshaw-spec double cabs. That means the 'work' models, 4Work and 4Life, don’t have it, even as an option.

Unlike some rivals, such as the Toyota Hilux, there are a trio of three-point seat belts for back-seat passengers. The reliability record seems patchy for the L200, with some owners reporting years of trouble-free driving and others listing a range of problems. Inevitably, vehicles used off-road are likely to suffer more damage and reliability issues than those that rarely get their tyres muddy. An inspection is definitely worth it when buying second-hand.

As modern as the L200 looks, the engine seems out of character. The lower-power rating of 134bhp is more than the entry level Ford Ranger’s 125bhp, but the Mitsubishi engine, in both 134bhp and 175bhp ratings, sounds noisier than some rivals.

This generation of L200 comes with a five-speed gearbox as standard – rivals of a similar age mostly have a six-speed box now. The lack of a sixth gear contributes to the level of engine noise, particularly at motorway speeds. The standard low-ratio gearbox means that the L200 is a capable off-road performer.

Higher-spec L200s, from Warrior upwards, are equipped with Mitsubishi’s Super Select system. 4Work and 4Life models get a differential lock with the Easy Select system that permits shifts between two and four-wheel drive in high-range revs at speeds up to 62mph.

The L200 was the first pick-up truck to break the mould of the ‘house brick’ school of pick-up design. The curvy design was inspired by Mitsubishi's rally raid cars that were successful on the Dakar rally, and really helps the L200 to stand out.

The car-like qualities continue inside, with a fit and finish that's on a par with Mitsubishi's SUVs, and the L200 feels more user-friendly than a number of rivals. It also offers more space in the back of the double-cab model than some others, and has easier access, too. If it looks more car-like inside, the engine noise and assembly of levers for the gears and transfer box make sure the past hasn’t been left behind, though. For many rivals, the transfer box is no longer operated by a chunky lever, as in the L200, but by a switch on the dashboard.