Along with all the reveals, unveils and new car debuts, the Geneva Motor Show played host to a great selection of the weird and wonderful 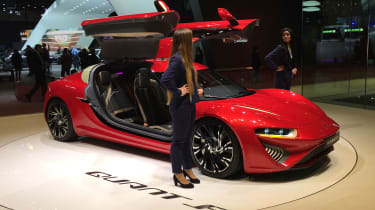 The 2015 Geneva Motor Show was packed with new cars, facelifted models and concepts, but in and amongst the headline-grabbing Ferraris, Porsches and Bentleys, stood a selection of the weird and wonderful – from ostentatious tuner cars to old-school classics.

We’ve put together a gallery of our top picks, including a 1000bhp electric super-saloon, a camouflaged Mercedes, and even a mint 1974 Ford Escort. Read on and have a flick through the gallery – and don’t forget to let us know your top picks.

Electric car maker NanoFlowcell, showcased its 1075bhp, gull-winged Quant F super-saloon at the Geneva Motor Show. It’s 5.25 metres long, has four seats and can hit 186mph flat out. There’s no word yet on real-world range, but if it goes into production, it would undoubtedly give Tesla something to worry about. 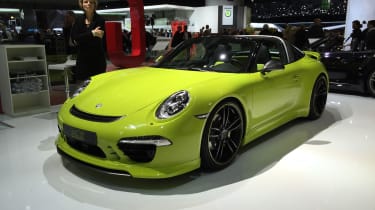 This Porsche 911 Targa 4S has been fettled by German tuners, TechArt. They’ve taken an existing 4S and added 21-inch wheels, an upgraded exhaust system and a lairy lime-green paint job. Inside there’s lashings of carbon fibre, leather and aluminium. The cost of this car hasn’t been announced, but like any custom-built TechArt Porsche, everything has a price. 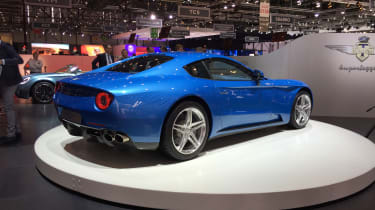 Touring Superleggera has once again used Geneva to show off its bespoke coachbuilding skills – this time with the sleek Ferrari F12-based Berlinetta Lusso. The smoother design appears to have been rounded at every edge, with a more retro look associated with classic Ferraris of the past. The 7.3-litre V12 under the bonnet remains, and should be capable of 0-62mph in around 3.1 seconds. 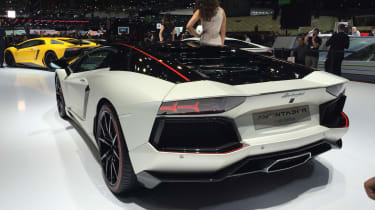 First revealed last year, this is the first time we’ve seen the Aventador Pirelli Edition in the metal. It gets a black and white two-tone paint job, with red detailing on the roof and tyres. The theme continues inside, with black Alcantara and red stitching. The 691bhp V12 remains untouched. 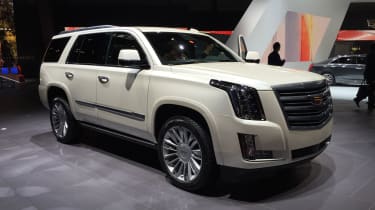 Among all the small crossovers and MPVs, Cadillac brought its new Escalade to Geneva. Like before, the full-size SUV is bigger than anything we get in the UK, and comes with a 6.2-litre V8 petrol engine with six-speed automatic gearbox. We’ll be driving it later this month, so stay tuned for our thoughts. 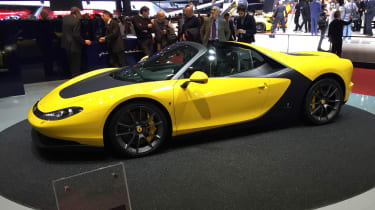 Based on the Ferrari 458 Spider, the Sergio commemorates 60 years of Ferrari working with Italian design house, Pininfarina. We first saw a concept version at Geneva in 2013, but this is the production-ready version. Only six will be made,  and you can expect a equally exclusive price tag to go match. 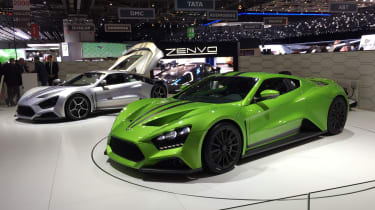 We’ve seen the Zenvo ST1 before, but this version has been tweaked for 2015. There’s a new single-clutch seven-speed automatic transmission and upgraded interior, while the 6.8-litre V8 engine remains. The Danish supercar pumps out a whopping 1,104bhp and can change gear in just 35 milliseconds. 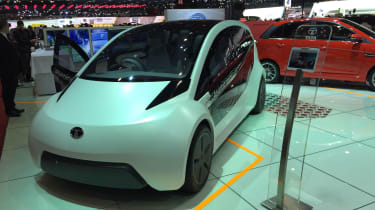 We drove the Tata Pixel back in 2012, but the Indian car maker still hasn’t managed to bring the car to market. The front wheels can tuck back into themselves when turning left or right – at angles of up to 105 degrees. There’s no denying the technology is impressive, but there’s still no word on when it might go on sale. 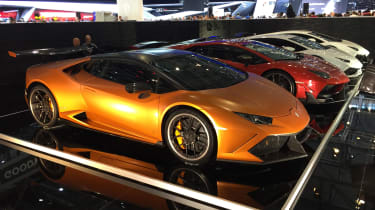 This selection of DMC-modified Lamborghinis was on display at the Geneva Motor Show. The Huracan, which usually gets ‘just’ 602bhp, has been ramped up to 621bhp, along with various styling tweaks and a selection of vibrant paint options. Of course, like many of the tuner cars at Geneva, carbon fibre is aplenty. 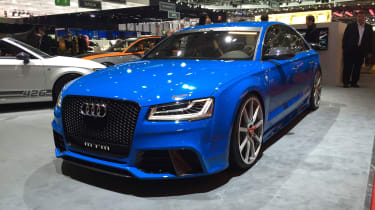 The MTM Audi S8 Talladega S was another of the bonkers tuner cars on show in Geneva. The luxury limousine has been totally overhauled, boasting 791bhp and 945Nm of torque. MTM says it’ll do 0-62mph in 3.1 seconds, and double that in 9.9 seconds. Top speed is electronically limited to 202mph. 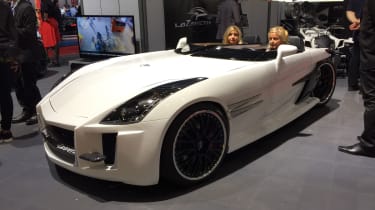 We saw the Lazareth Wazuma at Geneva last year, but that hasn’t stopped French maker bringing it back in a more subtle shade of white. The three-wheeled two-seater, looks a bit like a mix between a Mercedes SLS and a Reliant Robin. 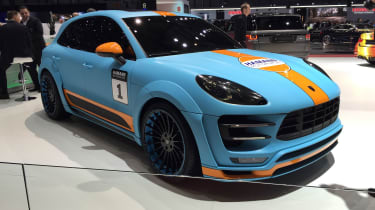 This Gulf-liveried Porsche Macan sat proud on the Hamann stand at the Geneva Motor Show this week. Based on a Macan S Diesel, it gets a wider body, bigger wheels and a sports exhaust. Whether or not the oil-burning SUV warrants the legendary paint job, we’ll leave up to you. 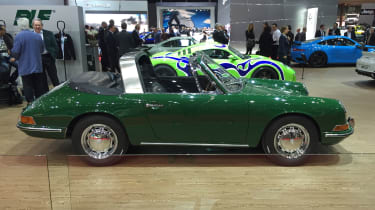 Among the weird and wonderful, we found this beautiful 1960s Porsche 911 Targa on the RUF stand in hall five. The meticulously detailed Targa looked great in classic green, with contrasting black leather interior. We’re just wondering if we can find an excuse to road test it back in the UK during the summer months... 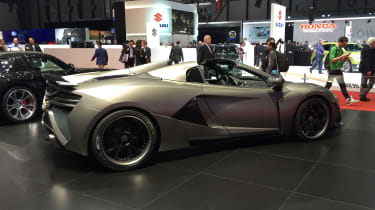 Proof that no car is immune from the tuners, Fab Design revealed its tweaked McLaren 650S at the Geneva Motor Show. The car gets a wider bodykit, 20-inch alloy wheels and huge rear exhausts. Power is up from 641bhp to around 680bhp, which should make it even faster in a straight line. 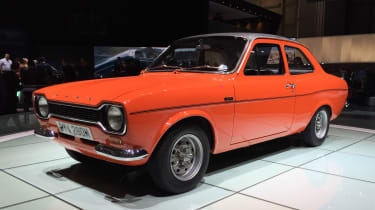 In a nod to the new Ford Focus RS, the Blue Oval showcased a variety of old models in Geneva. The most stunning, however, was this 1970s Escort Mexico, which has been beautifully restored to its former glory. We’ve not driven the new RS yet, but it’ll have to be seriously good to eclipse its legendary forbearer. 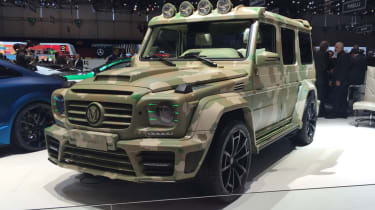 Proof that money doesn’t necessarily buy taste. This ‘camouflaged’ Mansory G-Wagen stood out like a sore thumb in Geneva – but drew unprecedented attention from the media this week. Outside it get a full body wrap, roof lights and 22-inch wheels, while the cabin is trimmed in Alcantara. Based on the G63 AMG, this SUV ups power to a scarcely believable 828bhp. 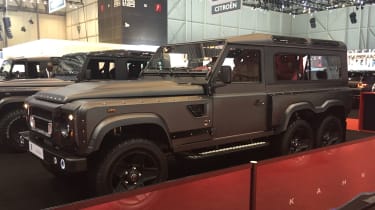 Not wanting Germany to get too complacent, Brit-based tuners, Kahn, copied Merc’s 6x6 philosophy to create this bespoke Defender. The six-wheeled beast gets a 6.3-litre V8 engine with around 430bhp, mated to a six-speed automatic gearbox. It’s worth noting that the Flying Huntsman is also available with four-wheels, with prices starting from £125,000.