Third report: despite finding some of the Nissan Juke’s hidden touches, we’re not wholly convinced by our SUV 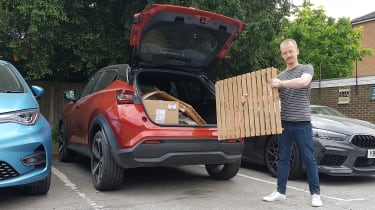 The more time I spend with the Nissan Juke, the more I’m appreciating some of its hidden touches; you might even say delights. But these aren’t enough to overcome the car’s obvious flaws; it’s still far from the top of its class.

Our Nissan Juke has received mixed reviews so far. In the last report I declared my love for the Tekna-trim car’s Bose sound system, with its speakers in the headrests. But I also said the lacklustre driving experience left me feeling lukewarm towards the second generation of the car that carved out the compact crossover sector.

So, for this report I thought I’d go back to the roots of the Juke and consider why people buy small SUVs, such as the Nissan, rather than a regular supermini: namely a bit more practicality and the extra sense of style that buyers believe a crossover brings. These are two of the main reasons why this type of car was developed, of course.

On that first count, a recent slew of orders from Amazon meant I had plenty of cardboard that needed throwing out – well, recycling – plus a few other household items that I was done with, so I folded the Juke’s split rear seats down to reveal the maximum 1,305 litres of boot space. 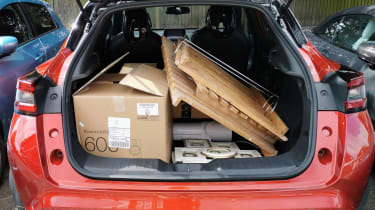 It took the items no problem, although I can imagine the high boot lip would be a bit annoying if you were lifting heavier things into the boot, or more awkward objects like a child’s bike or a scooter.

Anyway, all loaded up, I was ready to drop the detritus off at the tip the next day – then we went into lockdown. So the rubbish has been sitting in the Juke’s boot for weeks.

But it proved to me that while the Nissan is not on quite the same level as its main rivals when it comes to the versatility a small but growing family might need, for example – think the Skoda Kamiq and Citroen C3 Aircross – there are a few neat touches that have gone unnoticed on the Juke so far.

Raising and lowering the seats revealed the clever little slots that hold the seatbelts out of the way. Solutions like this show not everything has to be solved by electronics and technology in a modern car. 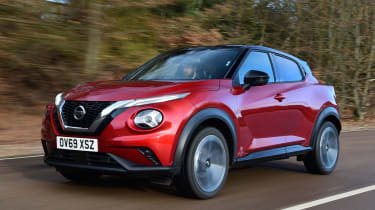 Nissan hasn’t always got it right with stuff like this. Skoda seems to lead the pack for sensible touches thanks to its Simply Clever features. But let’s not forget that Nissan has included a curry hook on many of its models for two decades, allowing you to safely hold your takeaway upright, so Nissan has form here, and it’s nice to see such features being integrated.

When these touches combine with style, it’s doubly delightful. Take the Juke’s hidden rear door handles that are integrated in the black plastic trim behind the rear windows. They give the Juke a sleeker look, but I also like them because they remind me of an Alfa Romeo 156 I used to own – though I’m sure Nissan would rather I compared the Juke to the brand’s original Pathfinder SUV, which used the neat design trick years before Alfa.

The Juke’s styling could be debated for days, but given how radical the original car was, I think Nissan has done an okay job of following it up. Evolution of the design here has worked in many respects. 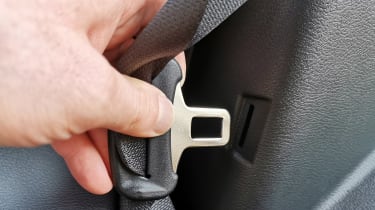 However, the few trips I’ve made recently have reminded me that the Japanese brand hasn’t been quite so successful at evolving the car in other areas. Yes, this Juke is more practical than the first one, but it still feels more cramped inside than rivals, while it doesn’t drive as well as the best small SUVs.

It’s not as much fun as a Mazda CX-3, and it’s not as practical or as high in quality as the VW T-Cross that we’re also running on the Auto Express fleet .

So, it’s still a mixed bag for the Nissan despite some nice touches coming to the fore recently. It seems the Juke is having a hard time lifting itself out of mediocrity. 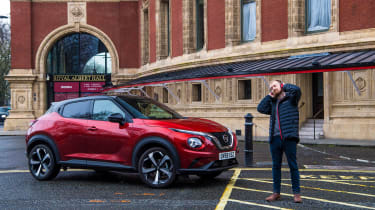 London's Royal Albert Hall is one of the most iconic music venues in the entire world. It has played host to world-famous acts such as Eric Clapton, Shirley Bassey, Kylie Minogue, plus a countless number of world-class orchestras. And the Eurovision Song Contest.

It’s clearly a venue that has some history when it comes to the big performers, then. And while such a lauded concert hall won’t be ditching its current sound stage for some fancy in-car audio any time soon, the Nissan Juke’s Bose set-up has proved to be a great way of piping rich tunes into my commute, a trip which, before the coronavirus hit, took me right past the Hall itself.

Offered in the range-topping Tekna trim levels, the Bose Personal Plus Audio system is an eight-speaker ensemble with a difference. That’s because the sound is quite literally brought right to your ears – thanks to each of the front-seat headrests having speakers of their own built in.

This isn’t a feature that’s unique to the Juke; in the past Mazda has used a similar system on its MX-5. But while it was an innovation used on the roadster to make up for the extra road, wind and engine noise that naturally comes in a car without a roof, inside the Juke’s well insulated cabin it just brings brilliant detail to your music. 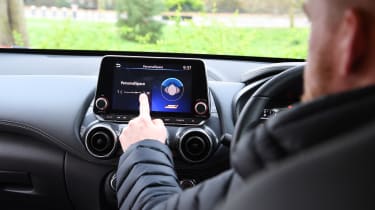 You can adjust the strength of the headrest speakers via a slider on a menu in the car’s eight-inch touchscreen infotainment. And when they’re in their strongest setting, the sound quality is almost like wearing a set of headphones; a feature Nissan and Bose were aiming for, if the integrated speakers’ design – mimicking a pair of high-end over-ear cans – is anything to go by. You can also reduce the effect to give the impression of a wider, more conventional system.

As anyone who’s bought a set of decent headphones will tell you, you don’t need massive speakers to deliver strong, punchy sounds as long as they’re close to your ears.

So while many of the more conventional in-car systems of the Juke’s rivals struggle at lower frequencies – anyone who’s turned up the volume to the point of buzzing and rattling door trims will know what I mean – the Nissan manages to sound powerful without ever taking things too far.

So, for the genuine audiophiles among small crossover buyers, this latest Juke is certainly well worth a look. 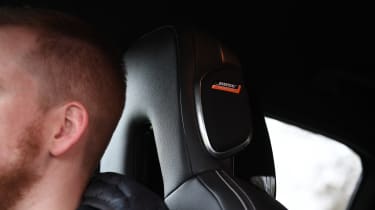 The Nissan’s high transmission tunnel gives the impression that you’re sitting quite a bit lower than you actually are for a high-riding crossover, and the handsome steering wheel and bank of round air vents continue the sporty vibe.

Unfortunately, the rest of the Juke’s driving experience doesn’t live up to that cool design or the cracking hi-fi – and its clutch pedal is the number-one culprit.

The spring in a good clutch bounces back quickly and positively, but the Juke’s has a similar response to lifting your foot away from a memory foam mattress. It’s really unpleasant, and for a control that’s used all the time, it really takes the shine off the whole driving experience. 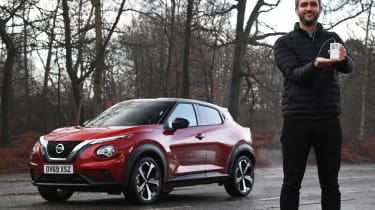 Nissan has made the latest Juke more fun to drive, but the trade-off is a firm ride

When the Nissan Juke was launched in 2010, it changed the automotive landscape forever. It was one of the first cars of its kind, and buyers flocked to it just as music lovers did to the first iPod.

So, like the updated model that followed the original iPod, this new second-generation Juke had a lot to live up to. Apple provided people with the ability to place thousands of songs in their pocket, in much the same way the novel Nissan introduced the concept of small SUVs to fashion-conscious buyers.

As time wore on, the Juke’s compromised packaging and underwhelming driving experience saw it fall behind the competition. Similarly, despite its innovative features and clean white casing, Apple’s first MP3 player was soon surpassed by more modern rivals. But then the iPod became the iPhone, and we all know how well that went.

The Juke’s fundamentals haven’t changed in this new version: it is still a style-focused small SUV with a raised driving position and polarising looks. It’ll appeal to many people on style alone, but others will see that bulbous face and head straight for a SEAT showroom. Under the skin, though, this new Juke is completely different. From the all-new CMF-B platform to the turbocharged three-cylinder engine, this second-generation model shares very little with its predecessor. 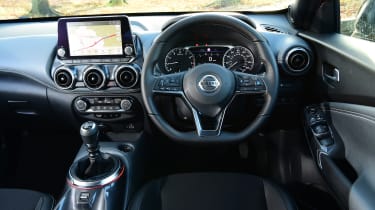 To find out if this is enough to put it back with the best, we’re running a Tekna model on the Auto Express fleet for the next six months. It’s this trim we’d recommend; despite it costing quite a bit more than the entry-level Visia (prices start from £17,395), Tekna models feature Nissan’s Advanced Safety Shield Pack, including a 360-degree camera, blind-spot intervention, rear cross-traffic alert and intelligent cruise control. That’s in addition to the standard model’s fantastic LED lights and DAB radio.

Other desirable kit fitted to our Tekna test car as standard includes a set of Bose speakers integrated into the front headrests, heated seats, and a heated windscreen – a blessing during the colder months. A seven-inch touchscreen with sat-nav, Apple CarPlay and Android Auto is fitted to cheaper N-Connecta cars, which means they’re standard on our Tekna, too.

Our car’s only optional extra is the two-tone Fuji Sunset Red and Pearl Black paint. Nissan’s lesser ‘Flame Red’ is the only colour available at no extra cost, and while this combination looks great, it makes our car’s design seem a bit ostentatious.

We’re now nudging almost 3,000 miles since the Nissan joined our fleet, and are pleased with the performance that this seemingly small 1.0-litre turbo engine offers. On paper it wasn’t as strong as its rivals’ when we pitted it against the SEAT Arona and Volkswagen T-Cross, but in reality it’s plenty quick enough for me. The Juke’s manual gearbox and slightly spongy pedals aren’t as slick as the Arona’s, but the Nissan’s steering is precise and the body control is excellent for a car of this type. The trade-off, though, is a firm and fidgety ride. That’s a shame, because in many other ways this second-generation Juke is easy to live with and largely rewarding to drive. 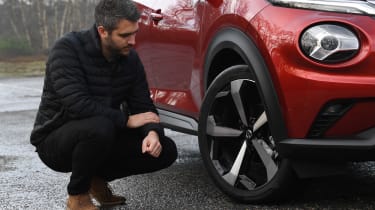 Practicality is vastly improved over its predecessor, too. The SUV’s 422-litre boot swallowed everything my wife and I needed over the Christmas break – including an unjustifiably large haul of presents – and on one occasion even transported five adults and a dog for a windy walk on the beach.

Cabin stowage is a bit hit and miss; the door pockets are large enough, but the cubby between the front seats is barely big enough to hold a mobile phone. I’ve ended up using it as a rubbish bin, although it’s so small that I need to empty it at the end of every journey.

But the beauty (or not, depending on your view) of Nissan’s latest Juke lies in its distinctive styling. From the outset, the designers knew this was the original car’s key selling point, and so they needed to do something seriously special to ensure this new version carried the same appeal.

Like it or loathe it, you can expect to see a lot more of Jukes on UK roads in the coming months, including ours, because we’ll be piling on the miles.