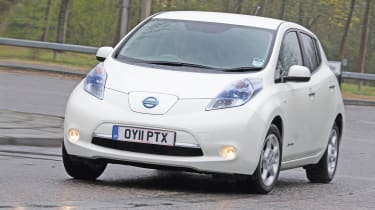 For those who don’t drive more than around 80 miles a day, and have their own driveway for easy charging, then the Leaf makes sense. With fuel prices soaring, the Nissan’s penny-pinching running costs will be a welcome relief for many cash-strapped family motorists. However, the high price is a stumbling block, and the limited range means that this is best viewed as a second car. Still, the Leaf represents a giant leap forward for electric models.

Advertisement - Article continues below
Meet the car charged with leading Nissan’s electric revolution. The Japanese firm has made a clear commitment to battery-powered vehicles – and the family-friendly Leaf is the first model to blow in.
We’ve already driven the Nissan on its home turf, but now Auto Express has taken the wheel of one of the first examples to land in the UK. So, will the exciting, electrically-powered newcomer deliver a shock to the system of traditional diesel, petrol and hybrid rivals?
Video: watch CarBuyer's video review of the Nissan Leaf
[[{"type":"media","view_mode":"content_narrow","fid":"68649","attributes":{"alt":"","class":"media-image"}}]]
Around £4billion has been invested in developing the car’s electric motor and lithium-ion battery pack drivetrain, which is said to be one of the most advanced on the road.
This cutting-edge technology doesn’t come cheap, as the price of entry to the all-electric club is £25,990, even after you’ve included a £5,000 Government grant. You’ll also have to find another £995 for the special domestic charging point that replenishes the battery in eight hours, rather than the 12 taken by the standard three-pin plug unit.
Advertisement - Article continues below
Advertisement
Advertisement - Article continues below

However, the potential saving in running costs should counter the extra outlay. For instance, charge the Leaf overnight when electricity is cheaper, and you’ll fork out around £2. According to Nissan, the average monthly bill for ‘fuelling’ the newcomer is about £25, which is a £145 saving over an equivalent petrol or diesel motor.
And with so few moving mechanical parts, servicing promises to be exceptionally affordable. Better still, there’s no annual road tax to pay, the Leaf is exempt from London’s Congestion Charge, and company car users aren’t liable for any Benefit in Kind (BIK) tax bills.
So, what’s the catch?
Even driven gently, the Leaf’s maximum range is around 109 miles, and enthusiastic use in fast-moving traffic will easily see this figure slashed by half. However, if you’re one of the 95 per cent of UK motorists whose daily commute never exceeds 25 miles, then the Nissan’s lack of long-distance potential won’t be a hurdle. And there’s certainly nothing wrong with the way the Leaf drives.
As you’d expect, the electric powerplant delivers near-silent and silky smooth running, while the acceleration is surprisingly keen, thanks to a muscular 280Nm torque output. At higher speeds, the Leaf delivers the sort of refinement you’d normally associate with an executive saloon, as there’s virtually no mechanical or wind noise.
Advertisement - Article continues below
Keen drivers are likely to be disappointed by the lifeless and overly light steering, plus the ride can get crashy over poorly surfaced roads. However, for most owners, the Leaf’s safe, predictable handling won’t be a cause for concern.
A five-door hatchback layout means the Nissan is as practical as more traditional machines, with room for five adults at a pinch, and a decent-sized load bay. From behind the wheel, the Leaf feels entirely conventional, apart from the space-age LCD dash readout and stubby, centre console-mounted gearlever.
Initially, only range-topping models will be available, meaning you get plenty of standard kit, including a sat-nav system that shows you how far you can travel on current power reserves. One neat addition is a special iPhone application that allows you to remotely set the charging timer and temperature of the cabin.
And while the slightly dumpy exterior styling won’t be to all tastes, the Leaf looks no different  to a normal car. In fact, the only quirky visual detail is the raised profile of the headlamps, which have been designed to channel air away from the wing mirrors to reduce wind noise. Our car also had the optional tailgate spoiler-mounted £260 solar panel, which helps charge the car’s conventional 12V battery.
Advertisement
Share this on TwitterShare this on FacebookEmail
Advertisement