During its 10 months on our fleet, there’s been a clutch of staff waiting to drive our Nissan Leaf 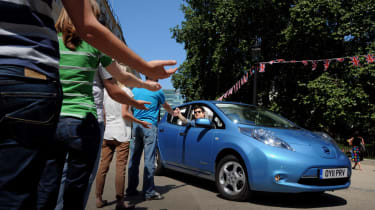 Form an orderly queue... The Nissan Leaf is one of the most in-demand cars on the Auto Express fleet, even though we test such a wide variety of new models every week.

Since it arrived in October, there’s always been a rush to grab the keys – and now the car is leaving our fleet, it’ll be missed. As a quick, cheap and relaxing way of getting about a major city, the Leaf has won plenty of friends in the Auto Express office.

“It’s simple to drive and quiet,” says picture editor Dawn Grant, who has a round trip commute of 18 miles from her home in west London. “It makes you think you’re doing your bit for the environment and I love the fact I don’t have to go to a petrol station.”

Even more of a fan is art director Darren Wilson. He adds: “I love the Leaf because it doesn’t cost me a penny. I live around eight miles away in Crystal Palace and the car prevents me having to pay the £10-a-day London Congestion Charge to get into the office. There’s no range anxiety, either. It just drives like a real car.”

So after 10 months with the world’s most popular mass-produced electric car, what have been the highs and lows for us?

Well, once you’ve got past the purchase price – £25,995 after a £5,000 Government grant – it doesn’t cost a lot to run. The first service was £123 (around £100 less than for a Qashqai), while there were virtually no ‘fuel’ costs at all. Our Source London card was just £10 for a year and unlocked plenty of charging points across the capital, while charging the Leaf up in our car park cost nothing. We just found a regular socket and plugged in.

As I live in a flat in north London, I was unable to charge at home – you can only get the £995 British Gas-installed system if you have a driveway. But this was never really a problem as there’s a charging bay nearby and I have such a short commute.

Could you live with a Leaf outside a big city? Almost – but it’d be tough. I drove it from London to Brighton to take part in the 63-mile RAC Future Car Challenge, and the motorway journey to the coast seriously depleted the batteries. Plus, the only charging point on the way was in Crawley, West Sussex.

Still, the return trip to Pall Mall involved driving in the most efficient way, taking in mainly A and B-roads, and I arrived with 44 miles remaining. That proved the Leaf could do exactly what Nissan claimed: over 100 miles. And in our time with the car, we didn’t run out of charge once.

We loved the comfortable ride and nippy performance, plus the sat-nav which told us exactly where the nearest charging bay was. True, the charging cable was so cumbersome we never bothered to wind it up and put it in its case, so it always flailed around in the boot. But on the whole, living with the Leaf has been a great experience. If there was a countrywide network of fast-chargers, that queue to drive it would be even longer.

“The Leaf isn’t the best driver’s car, and its cabin could be more luxurious, but it’s provided me with a relaxing, and crucially free, daily commute.” Luke Madden, Web reporter

“If you’re lucky enough to own two cars, one of them electric, it’s a win-win. EVs seem to thrive on commutes and short trips around town – at minimal cost.” paulhk, via www.autoexpress.co.uk