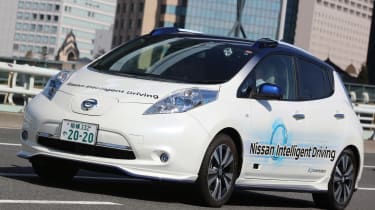 Nissan’s regular Leaf EV might be flawed despite a recent update to increase range, but this “Intelligent Driving” prototype is different. It shows just what’s possible in the future for self-driving cars, hinting heavily at how the brand’s line-up could include fully autonomous vehicles in as little as five years’ time. This self-driving Leaf is already a very slick and polished piece of technology that moves the game on and proves Nissan is one of the major pioneers in the car industry when it comes to next-gen tech.

Nissan has revealed its fully autonomous IDS Intelligent Drive electric vehicle concept at the 2015 Tokyo Motor Show, previewing the firm’s next-generation Leaf EV – and we’ve already sampled the tech that will underpin the brand’s future self-driving models with a ride in its fully autonomous Leaf prototype.

Back in March Nissan CEO Carlos Ghosn announced that the firm would have a fully autonomous car in its model line-up by 2020, and this Leaf is a giant step in the right direction.

However, walking around the car you might not know it. There aren’t many visual differences to the standard Leaf, except for a few stickers, but look a little closer and you’ll see some camera pods and radar devices that hint at the tech lurking beneath this standard production car’s skin. 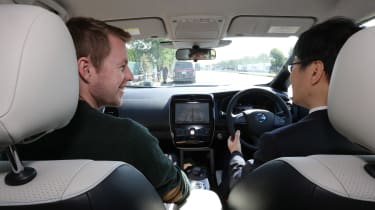 Step inside and it’s a similar story, but push the Leaf’s power button and that’s where things start to get interesting. Unlike Audi’s A7 piloted drive autonomous concept we drove earlier this year, the Nissan’s systems aren’t restricted to motorway driving. You can programme this Leaf’s sat-nav and switch to fully autonomous mode so the car will drive itself to your chosen destination, even around town.

Pulling into the busy traffic around Tokyo bay, it’s a surreal feeling at first as Nissan General Manager for Advanced Driver Assist Systems and Strategy, Tetsuya Iijima, hands over full control to the car’s electronic brain. 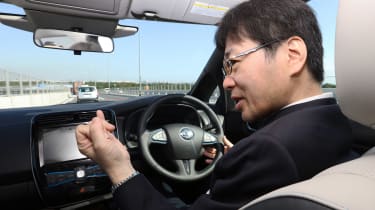 The ECU uses information from 12 cameras, four ‘millimetre wave radar’ sensors and four ‘3D flash lidar’ scanners – an industry first on this production prototype, according to Iijima – to work out where the car is on the road, sense free space around it and pick up moving objects, such as pedestrians and traffic.

At the moment the Leaf’s boot is full of hardware to process all this info, but Iijima highlighted that this is only for testing, and that the electronic trickery will be condensed down to something no bigger than a notebook for a potential future production car. 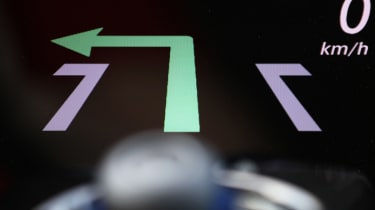 From our experience on a drive through the hectic streets of Tokyo, the systems aren’t far away from this stage, either.

The Leaf will indicate and pull out for you if you need to overtake, as well as move into the correct lane for your chosen route. The on-board cameras can recognise red and green colours as well as road markings, so the Leaf doesn’t rely on following a car in front to stop at traffic lights or junctions. It’ll even spot pedestrians crossing the road when you’re turning at an intersection thanks to its 140-degree horizontal field of vision.

But it’s more sophisticated than simply stopping, going and turning. Iijima says Nissan chose this combination of laser and lidar systems as they’re accurate to within 2cm, mapping out a full 3D picture of the car’s surroundings so it knows exactly where it is on narrow, congested roads. The radar scanner takes over on the motorway, with the system able to cope with speeds of up to 130kph (80mph). 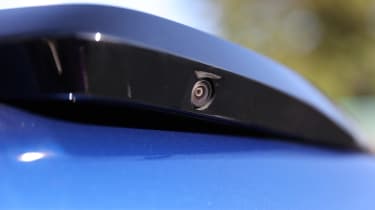 Despite the high level of tech needed, it’s simple to operate. There’s a rotary controller behind the gear selector and a screen in the instrument panel that shows the view ahead at low speed, as well as bird’s eye diagram of the road at high speed. On top of this, Iijima’s team has added a head-up display to warn the driver in plenty of time that the car is about to make a manoeuvre, helping to improve comfort.

It means the all-electric, fully autonomous Leaf is incredibly relaxing to travel in. Just as Nissan’s EV removes intrusive engine noise you sometimes get in family hatchbacks, the self-drive system removes the stress of dealing with urban traffic.

You still have to focus on the road in case you need to intervene, but it means less time and brain power is taken up by dealing with these tasks, says Nissan. Plus the electronics don’t draw much power either, so it doesn’t affect the updated 30kWh Leaf’s 155-mile range, and in autonomous mode the Intelligent Driving Leaf is likely to be slightly more efficient than a human driver, too. 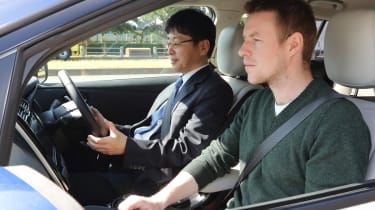 The car will give you a 10-second warning when you’re nearing your destination, after which it’ll hand command back to the driver. At any point the driver can turn the steering wheel or hit the brakes to regain control, too.

With 300,000km (186,000 miles) testing logged already, Nissan’s autonomous Leaf Intelligent Drive prototype already shows what’s possible in the future – and using many existing components and only a few new ones, Iijima says it’s technically possible for this car to go into production tomorrow.

Legislation has to catch up first, but Nissan’s point-to-point self-drive system feels very much like the next step for autonomous cars.

Find out more about driverless car tech and when you'll be able to buy a self-driving car here...