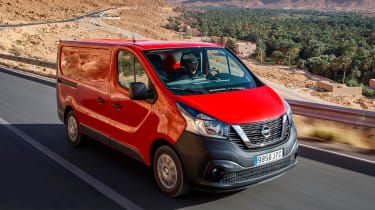 Nissan’s mid-size commercial vehicle, the NV300 van, is the final puzzle piece in the brand’s revitalised workhorse line-up. The NV300 shares its platform and structure with the popular Renault Trafic and Vauxhall Vivaro, as well as the not-so well-known Fiat Talento. In fact, it’s even built in the same factory as the Trafic, Talento and the non-Luton-built Vivaros, in Sandouville, France. Other key rivals for the Nissan NV300 include the Ford Transit Custom, Volkswagen Transporter and Citroen Dispatch.

One of the most noticeable changes from the Nissan NV300’s Primastar predecessor is the exterior design. Nissan says that it deliberately created the new NV300 to look more like its current SUV range – i.e. the Juke, Qashqai and X-Trail. In fact, the Nissan NV300 was designed at the Nissan Design Centre in London, and the twin bars on the nose give it Nissan's corporate look.

The more car-like design theme continues inside. Thanks to the Renault-Nissan Alliance that sees the two brands share parts and engines, the interior is much like that of the Renault Trafic, and features a similar dashboard and infotainment system design as popular Renault passenger car models like the Clio. The NV300 is available in Visia, Acenta and Tekna trims, and all panel vans come with hill start assist, electric windows, Bluetooth connectivity, DAB radio and heated door mirrors. Acenta trim brings air conditioning, body-coloured panels, a smartphone dock, front fog lights and rear parking sensors, while Tekna throws in rain-sensing wipers, automatic headlights, cruise control and the NissanConnect touchscreen infotainment system with sat-nav. 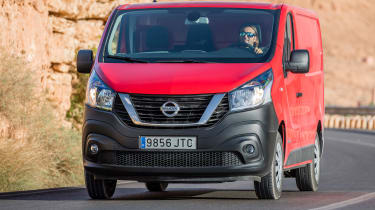 Nissan also claims that - since the NV300 is the last of its new line of commercial vehicles to be revealed – the brand has “become a one-stop-shop for every van, truck and pick-up driver.” Even with the NV300 alone, you can choose from a panel van and crew van that are available in two different lengths and two different heights. There’s also a NV300 Combi nine-seat passenger van and a chassis cab model that you can fit with a body that meets the specific needs of your business. Load space for the regular panel van ranges from 5.2 cubic metres to 8.6 cubic metres.

There’s only one engine to choose from – the 1.6-litre dCi that’s used in the Qashqai and X-Trail – but it comes in four states of tune. There are two single-turbo versions offering 94 and 118bhp and two twin-turbo offerings with 123bhp and 143bhp.

All engines come with a six-speed manual gearbox, with no automatic ‘box available at all; Nissan is considering selling one “in the future” if there’s enough demand for it.

The most efficient panel van is the lesser-powered 123bhp twin-turbo model, which reaches a claimed 47.8mpg and 155g/km, thanks to the addition of start/stop that the single turbo engines do without. The Combi nine-seater version manages to do a little better at 50.4mpg and 145g/km.

One of the NV300’s trump cards is its superior warranty, as it’s covered for five years or 100,000 miles; that’s one year longer than the Trafic and two more than the Vauxhall Vivaro. In fact it’s one the best warranties you can get for a panel van. Service intervals are every two years or 40,000 miles.

Nissan Europe’s Head of Marketing for LCVs, Paolo D’Ettore, claims that the NV300 is a “running costs champ”, and the figures appear to back that up.

The solitary 1.6-litre diesel engine is available in four states of tune: 94bhp, 119bhp, 123bhp and 143bhp. The first two are equipped with a single turbocharger and the latter two are twin-turbocharged. An eco button is standard on all NV300 models, which dulls torque output and softens the accelerator response to increase efficiency. Twin-turbo engined models also get start/stop tech to further increase the NV300’s fuel-sipping potential. Start/stop is an option on the single turbo engines.

Despite the higher power output, the most economical engine fitted to the Nissan NV300 is the 123bhp twin turbo model, which offers 47.8mpg and 155g/km on the combined cycle. That means it’s almost on a par with the most efficient mid-size panel vans you can get.

Both single turbo engines manage exactly the same efficiency figures, at up to 43.5mpg and 170g/km. The punchy 143bhp panel van model can do up to 41.5mpg and 175g/km.

Although the NV300 shares a lot with the Trafic, Talento and Vivaro, the warranty cover the Nissan gets is the best of the four at five-years or 100,000 miles. That’s one year better than the Renault Trafic and two better than the Vivaro and Talento.

Service intervals are long too – you’ll have to take in your NV300 for a service every two years/40,000 miles. Also part of the NV300’s warranty package is a five-year paintwork warranty, five years of cover for genuine Nissan parts and a 12-year corrosion warranty.

The NV300 is available in a range of different sizes. Four different standard van sizes and two sizes of crew van make up the commercial side of things, while there’s also a nine-seater passenger variant. The NV300 is 110mm longer than the outgoing Primastar, so that means even the smallest version can carry three Europallets, 10 sheets of plasterboard or up to 270 inflated footballs with a load space of 5.2 cubic metres. The tallest and longest model is capable of carrying up to 8.6 cubic metres.

If you need something a little more suited to your specific needs, you can also get a platform cab that comes equipped with either of the two twin turbocharged engines. 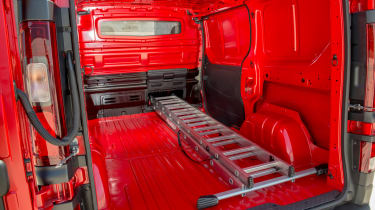 If you go for the panel van, there is a bulkhead hatch fitted as standard. What that means is there is a small hatch opening at the very end of the load bay that lets you slide long objects through and under the passenger seat. Ladders, piping and other construction or maintenance materials up to 4.15 metres long can fit.

If you want to stuff even longer things in the bulkhead hatch, the rear door fitted with the number plate can be locked, while the opposite door is left open so super long items can be left to hang out of the back. Nissan’s extensive accessories list for the load bay includes things like an overhead storage area for long items, shelves, racking and other solutions.

As you would expect, these volumes are identical to its Renault, Fiat and Vauxhall siblings, and is larger than the Citroen Dispatch, Peugeot Expert and Toyota Proace trio.

If you need to tow anything, all versions of the NV300 are able to tow a 2,000kg braked trailer, or a 750kg unbraked trailer. Nissan offers a tow bar with electric connection and the brand’s Trailer Sway Mitigation technology.

All Nissan NV300 models come with a range of safety tech fitted as standard; anti-lock brakes with electronic brake force distribution, stability control, traction control and hill start assist are equipped no matter which model or configuration you choose. If you go for the nine-seater Combi version, tyre pressure monitoring is fitted, too.

The Nissan Primastar, the NV300’s predecessor, had a pretty good reliability record; its only glaring issue was problems with the optional automatic gearbox. The NV300 is manual only, so that at least is one less thing to worry about.

The Renault Trafic on which the NV300 is heavily based is a little too new to really comment too much on the long-term reliability, but the 1.6-litre dCi diesel engine is a tried and tested unit for both Nissan and Renault. Should anything really go wrong, you’re covered for five years roadside assistance as part of the warranty package. That cover spans everything from breakdowns, accidents and even things that aren’t usually covered like putting in the wrong fuel or losing your key.

Although only one engine is on offer in the NV300, there’s a decent amount of flexibility thanks to the four states of tune: 94bhp, 118bhp, 123bhp and 148bhp. Our pick would be the 123bhp twin turbo model; not only because it’s the most efficient but because it has a healthy 320Nm of torque.

The gearing is high – presumably set to reach higher levels of efficiency – so you do have to drop a couple of cogs in the notchy six-speed manual if you want to overtake swiftly. 0-62mph is dealt with in 11.9 seconds and its top speed is 108mph.

If that sounds a little ponderous, there is always the 143bhp version, which has an even healthier 340Nm. 0-62mph clocks in a second faster at 10.9 seconds and has a higher top speed at 124mph. 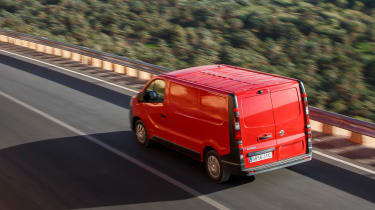 Our test route consisted of sweeping main roads, potholed country roads and even a little town driving. The NV300 behaved itself well, with good rearward visibility from its large door mirrors and well-damped suspension. The steering feels nicely weighted, too.

Given the NV300’s roots lie with the Renault Trafic, you can forgive it for having nigh on the same interior as its Gallic sibling. The steering wheel is chunky, and the central dashboard, where the Tekna trim's NissanConnect infotainment system features, has the exact button layout seen on the Renault Clio supermini.

Material quality is decent as a result of the passenger car connections with soft-touch plastics used to top the dashboard. Other plastics lower down are pretty hard-wearing and durable, while the instrument cluster is clear and easy to read. 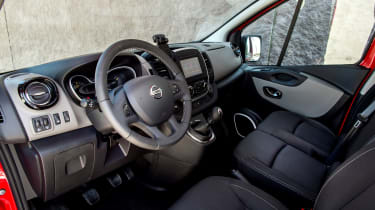 There are neat storage solutions like a top-loading glovebox and the door bins are deep enough for large paperwork folders and small bottles. There are also two pop-out cupholders fitted to the dashboard but these are too shallow for a 500ml bottle, which quickly fell out while on the move. In total there are 89 litres of storage space in the cabin alone.

The NissanConnect touchscreen infotainment system that's standard on the top-spec Tekna trim has satellite navigation on board. The maps area clearly to read and the user interface is easy to use. It's a bit basic, but it can be updated through a USB stick.

Options include a Rear Glazing Pack that adds a fixed window to the steel bulkhead, glazed rear doors, a heated rear screen and rear wipers. There's also an Offside Door Pack for the longer L2 models, which not only adds a sliding side door but allows the rear doors to be opened by 270 degrees. There are also various practical accessories like mobile phone and tablet holders and little touches like a delivery note holder, a separate space for your laptop and a tachograph. Nissan will also factory-fit protective wood panelling and LED lights in the load bay.