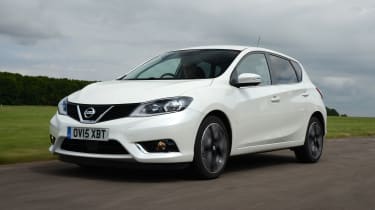 If you’re after a discreet, efficient family hatch that’s brisk in a straight line, then the Pulsar isn’t a bad choice. But there isn’t enough dynamic ability to control the power. It lags behind rivals like the Peugeot 308 GT to drive, isn’t as comfy as you would expect and doesn’t look the part, either. The Nissan makes much more sense as a mid-spec diesel, where its practical and durable strengths can shine through.

Nissan will freely admit that its Pulsar isn’t designed to get your heart racing, despite the name.

That could change early next year with the likely arrival of a Pulsar Nismo though, and to whet our appetite, the brand has just slotted in its 1.6-litre DIG-T 190 turbo petrol. We’ve driven the Ford Focus rival to see if it finally injects a boost of adrenaline to the range. 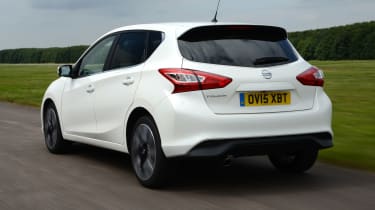 There aren’t many visual clues to the slightly more racy engine under the bonnet – all you get is a new exhaust tip and the 18-inch alloys on this top-spec Tekna model. It looks identical to the bland standard Pulsar, and there isn’t even any badging to mark it out as the hotter car.

The direct-injection turbo petrol engine, which delivers 187bhp and 240Nm of torque, is used in the standard flagship Juke crossover. It’s actually slightly faster in this form, as the Pulsar sprints from 0-62mph in 7.7 seconds. 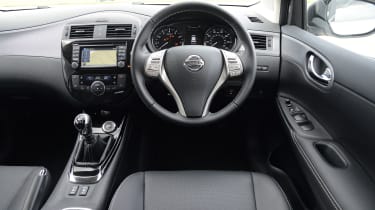 It’s smooth and pulls well from as little as 1,500rpm, although it tails off – like many turbo units – as it nears the red line. It doesn’t sound particularly sporty while doing it, either, but that does mean it’s refined when you’re not in the mood.

The Nissan returned nearly 40mpg with us, which is impressive considering its power, but that figure will drop away if you floor it. CO2 emissions of 138g/km are competitive – they’re similar to the Peugeot 308 GT and SEAT Leon FR’s, and better than the Hyundai i30 Turbo’s 169g/km. 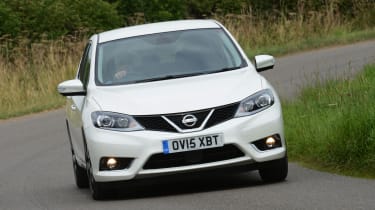 Nissan claims that it’s done a lot more than just chuck a bigger engine under the bonnet. The steering and dampers have been tuned for extra agility and feel. You can notice the firmer set-up reducing body roll, plus turn-in is fairly direct, but there’s precious little feel through the wheel and a dead, vague feeling in the straight ahead.

Push hard, and grip runs out sooner than you might expect, while the firmer dampers mean the Pulsar loses some of the standard car’s cosseting ride quality. It doesn’t offer the composure of the Leon FR, for example.

The rest of the package is business as usual, which means you get class-leading rear legroom and a 385-litre boot, plus a strong equipment list considering the sub-£23,000 price of this Tekna car. With this new engine, the Pulsar starts at £19,775.