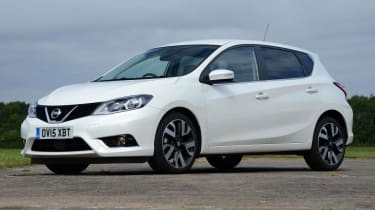 Few cars of the past decade have as low a profile as this small family hatch, but don’t be put off. The Pulsar is no class leader, but it’s refined and well equipped, plus you get plenty for your money. When you consider that you can buy a Tekna edition with less than 30,000 miles on the clock for £8,000, the Pulsar can make a lot of sense. It’s also a comfy car and it’s very family-friendly with its spacious cabin and roomy boot, so if you’re in the market for an Astra, Golf or Focus then you might want to also consider this less obvious alternative.

SUVs and crossovers are big business these days, and much of this is due to Nissan’s efforts with the Qashqai and Juke, which both launched new segments. More than a decade ago Nissan decided the way forward was not to offer its customers hatchbacks such as the Almera and Primera; instead it would focus on crossovers that had the same usability as a hatch, but with added versatility and a raised ride height to offer a greater feeling of security, thanks to the better visibility.

The Juke and the Qashqai were smash hits, so it was something of a surprise when Nissan launched the Pulsar in 2014. Not that UK buyers particularly noticed the arrival – or the demise – of this small family hatch. 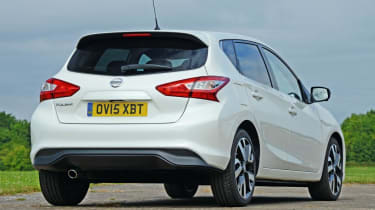 Nissan has offered a Pulsar in some markets since 1978, but it was sold as the Cherry or the Sunny for much of its life in the UK. The model covered here is codenamed C13 and badged as the Pulsar; it went on sale in the UK in autumn 2014, priced from £15,995. Buyers could choose between a 114bhp 1.2-litre petrol engine or a 109bhp 1.5 diesel, both turbocharged. Each engine came with a six-speed manual gearbox as standard, but the petrol unit could also be mated to an Xtronic CVT automatic box.

Four trim grades were offered: Visia, Acenta, n-tec and Tekna, with N-Connecta agppearing in spring 2016, followed by N-Connecta Style in autumn 2017. In spring 2015, a 187bhp 1.6 DIG-T petrol engine joined the range, with a manual gearbox. 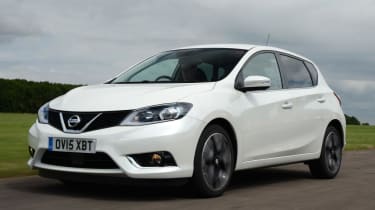 Alternatives to the Nissan Pulsar

Obvious rivals are the Vauxhall Astra, Ford Focus and Volkswagen Golf. All are capable, but you’ll get more for your money with the Ford or Vauxhall because the Golf’s prices are higher. Or you could opt for a SEAT Leon, which looks sharp despite being six years old.

Other tough adversaries include the Hyundai i30 and the Kia Ceed, which major on value and come with long manufacturer warranties. The Mazda 3 is fun to drive, well equipped and attractive, while the Honda Civic is roomy and reliable. You could also consider the Alfa Romeo Giulietta, the Toyota Auris and Peugeot 308.

All Pulsars are well equipped: Acenta brings AEB, while Tekna gets blind-spot and lane-departure warning.

Don’t dismiss the Xtronic CVT automatic transmission too quickly; it’s slicker than you might expect, with stepped gears.

Be aware that stop/start glitches can sometimes arise from software faults or below-par batteries. These gremlins affect every engine.

Some early 1.2-litre Pulsar engines were fitted with poor-quality piston rings, which could lead to a hefty thirst for oil.

Whichever Pulsar you buy, you’ll get enough space for five adults and a decent-sized boot; with the seats up, the load bay can accommodate 395 litres, and with them folded this jumps by 1,000 litres. Buy further up the range and you’ll benefit from nicer cabin materials; entry-level Pulsars feature some cheaper plastics that don’t look especially appealing – but the dashboard is easy to use. 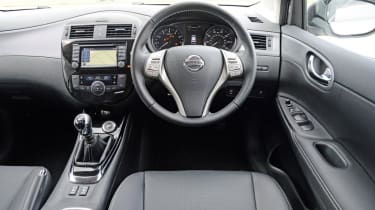 The Pulsar came with a three-year/60,000-mile warranty when it was new, although it’s possible to extend this by one, two or three years, taking the mileage cap to as much as 120,000.

The service interval for petrol-engined Pulsars is every year or 12,500 miles; diesel models extend this to every 18,000 miles or 12 months. Services alternate between minor and major, priced at £199 and £279 for petrols, rising to £229 and £329 on diesels. There is no cambelt to replace, but the coolant needs to be renewed every five years or 60,000 miles. The brake fluid has to be changed every two years.

Nissan has issued two recalls for the Pulsar. In March 2016, 8,404 models built between May 2014 and December 2015 were recalled because the headlight self-levelling mechanism could be unreliable when the car was fully laden. Four months later, 7,393 Pulsars made between April 2014 and May 2016 were recalled to update the oxygen sensor failure software.

The Pulsar has never appeared in any of our used car Driver Power surveys, but it was in our 2017 new car poll, when it came a very respectable 23rd out of 75. Its high rating was largely thanks to its comfort and infotainment systems, as well as low running costs. The Pulsar’s engines and safety features got a thumbs up, too; reliability and the dynamics were the low points.