The updated Nissan Qashqai has gained a new 1.3-litre turbocharged petrol engine, but is it a good match for the popular crossover? 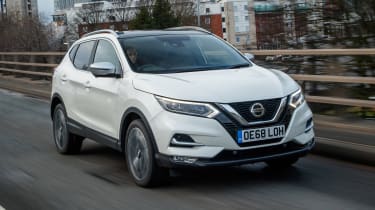 Our first drive in the 2019 Nissan Qashqai in the UK confirms that the new 140 DiG-T petrol engine is the pick of the range. It offers vastly improved performance over its predecessor, yet manages improved fuel consumption and lower tax rates. The Qashqai's place as one of Britain’s most popular cars looks set to continue.

This is the new Nissan Qashqai. We’ve already sampled the revised model in Catalunya, but now we’re here to see how it fares back in the UK - where over three million have rolled off the production line since it debuted in 2006.

Following a mid-life facelift in 2017, which focused on styling, interior quality and suspension tweaks, the latest updates looks to improve both the engine line-up and in-car tech.

In effect, every engine in the range (there are two petrol and two diesels to choose from) is either new or overhauled. The previous 1.2 and 1.6 litre petrols have been replaced by a 1.3-litre turbocharged unit. It’s the same engine that can be found in the Mercedes A-Class (though Mercedes offers it in different power outputs) and recently refreshed Renault Kadjar. The 138bhp ‘140’ - so named due to its metric power output - is expected to be the big seller, and that’s the one we’ve tried here. 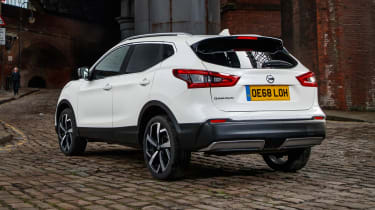 The DiG-T engine features a variety of technical enhancements over the outgoing units, many of which are finding their way into a Nissan for the first time. The upshot is that the 140 marks a big improvement over the old 1.2; not only does it produce 25bhp more, but there’s significantly more torque throughout almost the rev range. It can sound a little gruff under very hard acceleration, but for the most part it’s fairly peaceful.

While it’s not got the performance to blow away a hot hatchback - or even a warm one - it’s much more sprightly than before and perfectly acceptable for a car in this class.

The more powerful version makes another 20bhp and 20Nm, but doesn’t feel drastically quicker. Officially, it’ll be capable of pulling heavier loads, too, but there are better tow cars for the money so the extra £1,100 it adds to the asking price would be better spent elsewhere.

So what of the fuel consumption? Our time with the car, two-up and covering a mix of heavy traffic and twisty, undulating country roads, resulted in an indicated 43.3mpg. Impressive given the conditions, and a figure which makes the official 49.4mpg seem fairly plausible given more conventional use.

Officially, the new models emit less carbon dioxide than their predecessors (8g/km and 13g/km less than the old 1.2 and 1.6 respectively) too, so both private and business users will benefit from lower tax costs.

Diesel options include an updated version of the evergreen 1.5 dCi – there’s a tiny bit more power and torque – while the 1.7-litre unit is a more thorough overhaul of the previous 1.6. Like on the Renault Kadjar, it gains an AdBlue system to reduce emissions (as does the 1.5), and power has climbed by 20bhp to 148bhp. The 1.7 will be the only Qashqai offered with the option of four-wheel drive, and will join the range later in 2019 from the N-Connecta trim level and above. 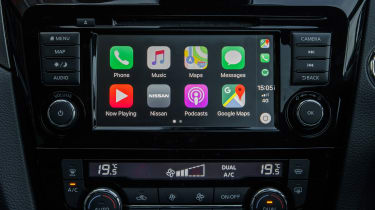 Also new for the latest round of updates is the infotainment system. It looks the same on the face of it, but the new processor is vastly more powerful than the old one, so loading times are significantly improved. The screen is much more responsive to touch, too, allowing smartphone-style pinch and swiping motions to zoom in and out of map pages and scroll through menus. The graphics still look rather cluttered, but it’s a huge step in the right direction.

Elsewhere it’s the same as before: the handling is safe and predictable; while the ride, helped by Nissan’s clever road scanning system which uses the engine and brakes to control the fore and aft pitch over bumps, is among the best in the class.

There’s five trim levels to choose from, with a basic 1.3 140 Visia starting from £19,995. That seems like a competitive price versus its rivals (including the Kadjar), but that’s for a car that lacks alloy wheels, satellite navigation or autonomous emergency braking. For those, you’ll need to step up to the Acenta Premium, which costs £2,800 more. However, Nissan compensates this with competitive zero percent PCP deals across the Qashqai range.