The Nissan Qashqai has become a huge sales success in the UK, thanks to its stylish looks, a quality interior and low running costs 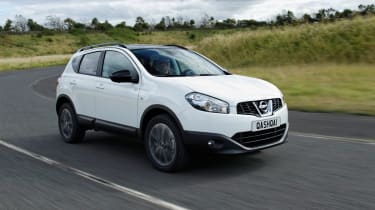 The Nissan Qashqai has been on sale since 2007, and a new model is due early next year. But age hasn’t dimmed the current version’s appeal – it’s frequently one of the UK’s top 10 best-selling new cars. Constant updates have helped the British-built crossover to remain competitive, and the 360 model tested here gets a decent amount of kit. Engine choices include 1.6 and 2.0-litre petrols or 1.5, 1.6 and 2.0-litre diesels, plus two or four-wheel drive, manual or CVT auto boxes and even a seven-seat option.

Blending the practicality and driving position of a 4x4 but with the low running costs of a family hatchback, the Qashqai offered buyers the best of both worlds – especially after its facelift in 2010. However, since its conception, other manufacturers have copied the winning formula, and there are countless options for anyone wanting a versatile SUV that won’t cost the world to run. Cars like the Skoda Yeti, Kia Sportage and Peugeot 3008 have all joined the party and all three aim to match the Nissan on practicality, drivability and price.

What’s more, you if you want your Qashqai to offer substance as well as style, you can specify seven seats or even four-wheel drive on top-spec Tekna models. If you need extra practicality, there's a seven-seat model called the Qashqai +2. The Nissan Qashqai has stormed the sales charts since its release in 2007, and it’s not hard to see why. An all-new Nissan Qashqai is due in 2014, and it's expected to get a smart new look, inspired by the High-Cross concept car revealed at the Geneva motor show in 2012, and improved interior and even more in-car technology. Interestingly, the Qashqai +2 model will be dropped, with Nissan encouraging seven-seat car buyers into a new Nissan X-Trail.

Despite the rugged SUV looks and high ride height, the Qashqai is roughly the same size as a VW Golf or Ford Focus, and as a result is a breeze to drive in cities and a doddle to park. That said, fans of more traditional off-roaders will still be happy behind the wheel of a Qashqai, as it has the confidence-inspiring raised driving position that many people buy these cars for. In terms of ride comfort, the soft suspension and large, chunky tyres do a good job of minimising disruption from lumps and bumps in the road, while body roll is surprisingly kept to a minimum. Four-wheel drive is an option on top-of-the-range models, but it damages fuel consumption and isn’t particularly capable. If you want a small SUV to tackle mountainous terrain then you’re better off stepping up to the Land Rover Freelander – famed for its off-road ability. All models get a manual gearbox as standard, while a CVT automatic remains a cost option across the range. We’d avoid the latter, as it’s noisy and slightly more expensive to run.

A Nissan Qashqai diesel is the best option if you want good fuel consumption and reasonable performance. Thanks to stop-start technology, the 1.6-litre dCi engine will return 62.8mpg and emit just 119g/km of CO2. This means both private and company car buyers will enjoy low tax bills, and puts the Qashqai on a par with eco-friendly rivals such as the Skoda Yeti Greenline. Insurance cover should be cheap, too. The slower and less powerful 1.5-litre dCi engine doesn't cost as much to buy - but that could be a false economy in the long run, as it can only manage 54.3mpg fuel economy and 129g/km CO2 emissions. When it comes to servicing costs, the Qashqai is not quite as affordable as its rivals, due to a 12,500-mile service interval and a warranty that only covers the first 60,000 miles (or three years) of ownership.

The Nissan Qashqai hasn't changed much since its introduction in 2007 but it was given a mild facelift in 2010 to help keep it looking fresh. From launch, the SUV has benefitted from chunky looks and a raised ride height but the compact dimensions and easy-to-drive proportions of cars like the Volkswagen Golf and Ford Focus. All cars get alloy wheels and cloth seats, while high-spec 360 and Tekna models get a styling upgrade with 18-inch alloys and a desirable panoramic sunroof. While the Qashqai’s soft-roader styling was refreshingly different when it was launched in 2007, today it seems fairly restrained. The angled headlights, raised ride height and alloy wheels give some visual interest, and it looks sharper than the Suzuki SX4 S-Cross, but the overall effect is safe rather than adventurous.

The Qashqai will hold 410 litres of luggage in its boot with all the seats in place. Fold the rear ones down, and this number increases to 1,513 litres. That's not quite as much as you'll get into a Peugeot 3008 and a full 250 litres less boot space than in the Skoda Yeti, but it’s still decent compared to standard family hatchbacks like the stingy Ford Focus, which makes do with just 316 litres. The Nissan’s boot is well-shaped, too, and the 60:40 split folding rear seats are easy to use. Its real trump card is clever storage spaces, such as the massive compartment built into the centre console. The high-riding chassis means occupants get a good view out, and everything about the cabin is simple and straightforward. Rear legroom is good, but a slightly sloping roofline means taller adults may find their heads brushing the roof. For the driver, thick C-pillars and a small rear windscreen can cause visibility problems - but this is less of an issue when you consider parking sensors are standard and a colour rear-view parking camera is fitted to higher-spec models. If you regularly carry more than five people, consider the versatile Qashqai+2, which has two extra seats in the boot and costs £1,400 more than the standard car.

The Nissan Qashqai has always had a good safety record, and its impressive five-star Euro NCAP score will reassure any potential buyers. The car has a full range of electronic safety systems to help keep you and your passengers in one piece, including six airbags, ESP, ABS and low-speed braking assistance, while the high driving position will be enough to convince some people of its robust and durable nature. Nissan Qashqai reliability is not quite so impressive, however, and although Nissan in general has good reputation for trouble-free motoring, the crossover didn't fare very well in our Driver Power 2013 survey. It placed 61st overall and in 2012, Nissan announced the recall of 7,300 Qashqais in the UK, due to a problem that could lead to the steering wheel coming away from the dashboard while driving. This formed part of a global recall that affected 51,000 cars around the world. However, all cars will be fixed under warranty and is a very rare issue – so this shouldn’t be make or break for anyone considering the Qashqai as a dependable family car.