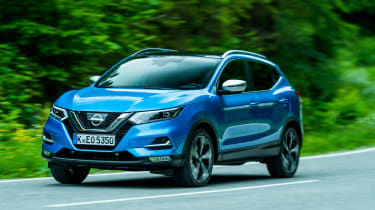 While Nissan’s efforts to update the Qashqai are more extensive than some manufacturers’ recent facelifts, nothing has been dramatically transformed. The tweaked design, boost in cabin quality and new safety tech is welcome, though it doesn’t feel as different to drive as is claimed. Nevertheless, this is still a practical, efficient and good to drive family crossover – even if more modest variants offer better value for money.

Nissan bosses will talk about Qashqai sales figures until they’re blue in the face. It’s a tremendous success story – it was a decade ago that Nissan took the controversial decision to move away from family hatchbacks and build a crossover instead, and since then 2.3 million examples have found homes across Europe. So far this year, it’s the UK’s third best-selling car.

It’s tough at the top, though. Almost every mainstream manufacturer has cottoned-on to the profitability of the mid-sized crossover, which is why the Qashqai has fallen down the Auto Express pecking order in favour of fresher rivals like the SEAT Ateca, Peugeot 3008 and Renault Kadjar.

Nissan’s response for 2017 is a raft of updates, aimed at breathing some new life into its biggest money-spinner. We’re driving it for the first time to see if they’re enough to bring it back into contention. 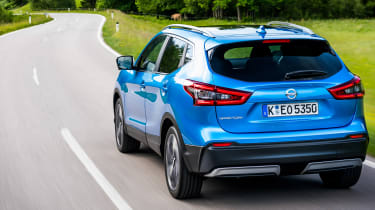 Inside, the focus has been on improving perceived quality rather than loading it with new tech. More tactile materials and extra leather on the doors, dash and centre console help lift the ambience. Most touch points feel pleasant and fairly upmarket, and the new steering wheel design is both smarter to look at and nicer to hold. It’s clearly improved, although the unexciting cabin design lacks the outright wow factor of the Peugeot and the ergonomic excellence of the SEAT.

The new Tekna+ flagship trim, added because buyers are increasingly opting for higher spec cars, comes loaded up with premium car niceties such as 3D-effect quilted leather and an eight-speaker Bose sound system. Electric heated seats, a panoramic glass roof, adaptive LED lights and Nissan’s 360-degree parking camera are also thrown in, while safety kit improves for the facelift with the addition of rear-cross traffic alert and pedestrian detection for the autonomous braking system. 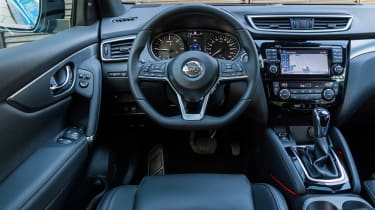 It’s a pity that updated Qashqai doesn’t yet receive the ‘ProPILOT’ semi-autonomous driving system. It’s available to order on Japanese models, but the tech hasn’t been developed to work on European roads yet, and won’t appear until the middle of next year.

Alongside visual and equipment updates, the Qashqai has received numerous tweaks aimed at improving the driving experience. Retuned springs and dampers, as well as updates to the firm’s Active Ride Control system, aim to reduce body movement over bumps, while changes to the steering rack boosts precision.

There’s also a new system called Active Return Control, which claims to make the steering’s self-centring feel more natural. In all honesty, the revisions are so subtle that we would need to try it back-to-back with the old car to really notice any differences, but it does feel a touch more positive when turning in to a bend.

Body control is reasonable and the Qashqai never feels wayward or vague, but it does lack the sharpness of the SEAT Ateca and the agile feel of the 3008. The long-throw manual gearbox puts pay to it feeling sporty or engaging in any way.  However, the ride does feel a little more settled than the old car, with less fidgeting over broken surfaces.

The additional soundproofing and new door seals are welcome, too – this is now commendably quiet at speed for a small SUV, with only a bit of wind rustle making its way into the cabin. One final feature is Stand Still Assist, which holds the car still on any incline for up to three minutes, allowing drivers take their foot off the brake without the car rolling backwards. 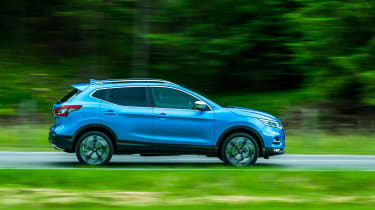 The Qashqai’s engine range is carried over, with only the 1.6-litre diesel we’re driving here receiving minor changes to boost refinement. It’s pretty hushed when up to temperature, although as with most diesels, if you extend it beyond 4,000rpm it does get pretty raucous.

It also delivers strong pace and respectable economy figures, though the cheaper and more economical 1.5 will offer enough performance for most. This variant costs over £30,000, however, putting it well with in the realm of larger SUVs like the Kia Sorento and Skoda Kodiaq. Mid-spec N-Connecta grades offer the best compromise between equipment and price.