The changes gifted by this mid-life facelift help the Peugeot 308 keep pace with a pool of talented rivals. But the fiddly infotainment system and challenging ergonomics remain, which is a shame. However, it’s comfortable and good to drive, while boasting one of the bigger boots in its class. This 1.2-litre PureTech model is the pick of the range, too, proving refined and cheap to run.

Since its launch in 2014, the Peugeot 308 has been one of those cars that sat firmly in the middle of the pack. It did most things well, but sporadic failings regarding ergonomics and infotainment let it down.

In an attempt to rectify some of those flaws, Peugeot has given its family hatch a mid-life makeover. So is it enough to beat the best cars in a competitive class? 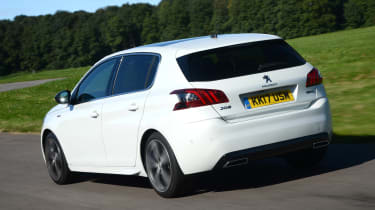 Despite fitting its vastly improved second-generation i-Cockpit in the latest 3008 SUV, Peugeot has kept the same analogue set-up as before in its revised hatch. Their awkward position means you still look over the steering wheel at the dials rather than through it, so some drivers will continue to struggle to get comfortable.

Elsewhere, the minimalist cabin remains. The 9.7-inch touchscreen has been updated to offer new 3D mapping, voice-activated controls and MirrorLink, including Apple CarPlay and Android Auto. It’s not the most responsive unit, but the functionality brings it in line with more tech-focused rivals such as the SEAT Leon and Volkswagen Golf.

The 308’s climate controls are still buried within the display, however, making them fiddly to operate. Every car has Bluetooth, DAB radio and sat-nav, as well as automatic lights and wipers, 16-inch wheels and rear parking sensors. Step up to the GT Line (as per our test car) and you’ll add sportier styling, LED lights and a reversing camera. 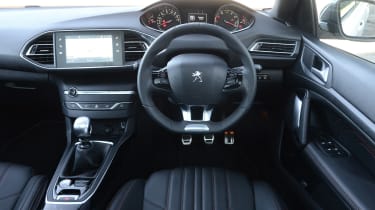 On the road the 308 feels as agile as ever, while the excellent three-cylinder PureTech turbo petrol engine is punchy and quiet. Grip is good and body control up there with the best hatches on sale; a Vauxhall Astra is marginally more responsive, but the Peugeot runs it close. While the ride is on the firm side, it’s never uncomfortable.

Where the 308 has the edge is on running costs, with this petrol car almost matching some diesel rivals. Official fuel economy of 61.4mpg is impressive, while low emissions make it an affordable company car. The new 1.5 diesel is expected to return 80mpg-plus.