A mere concept it may be for the time being, but the 308 R HYbrid feels almost production ready on this evidence. Peugeot Sport says it is waiting to judge the reaction to the car from the world’s press before making any further decisions, and the reaction from Auto Express is; build it. Having put this much time, money and engineering effort into the project so far, and made this much progress, Peugeot would be mad NOT to build this car.

So what’s not to like about the following set of headline re-writing credentials; 500bhp, 730Nm of torque, four wheel-drive, 1550kg, 94.1mpg and 70g/km, all wrapped up within the entirely practical skin of what appears to be a mildly breathed upon Peugeot 308 GTi?

Answer; you can’t actually buy this car yet. Indeed, unless the engineers at Peugeot Sport persuade their bosses to turn the 308 R HYbrid Concept into a production reality, you might never be able to drive this incredible car.

But having now driven the 308 R HYbrid, and driven it properly at a track for one full morning with none of the usual “please can you only do 40mph in it because it’s a concept car and we’ve only got one them” restrictions, I can tell you one thing without hesitation; Peugeot should build this car, and build it soon. 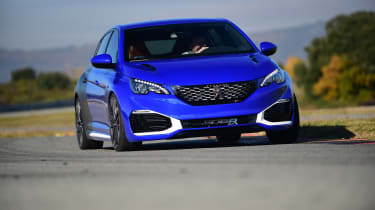 The 308 R HYbrid is a potential game-changer if ever there was one. Considering the cars it would be look to compete with – everything from a Honda Civic Type R up to and beyond the forthcoming new Ford Focus RS and Audi’s RS3 – that means it has the potential to be more than just very good. On this evidence, it could even be the car to finally pick up where the 205 GTi left off for Peugeot all those years ago. That’s how significant the 308 R Hybrid COULD be – if the bosses at Peugeot decide to make it.

Powered by a mixture of 1.6-litre petrol turbo engine and two electric motors – one at the front axle, another at the rear – the 308 R HYbrid has been in development for the lat year and a half at Peugeot Sport. It could well herald a new era at Peugeot, not to mention a new direction for the hot hatchback in general.

There are three different driving modes in the car; full electric (known as ZEV), hybrid, and hybrid sport. In full electric mode you are propelled by two 85kw electric motors, each boasting 115bhp. You can do up to 60mph in full electric mode before the 1.6-litre petrol engines comes alive, and at that point you have 270bhp and 330Nm beneath your right foot, about the same as the regular 308 GTi by Peugeot Sport, in other words. 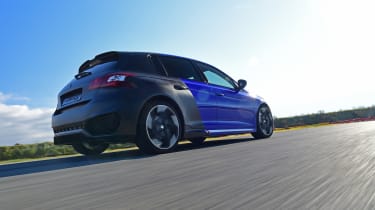 In hybrid mode, however, the electric motors are also used to fill in the gaps between gear changes, and during those brief moments when the petrol turbo engine is off boost. So in hybrid mode the car feels a bit like it’s powered by an atmospheric 3.0-litre V6, with zero lag, a fast but still slightly clumsy shifting six-speed auto gearbox and absolutely no let up in its acceleration between gear changes.

But the moment you press the hybrid sport button on the steering wheel, you get the full benefits of all three motors (one petrol, two electric) and 400bhp to play with. And in launch mode that gives you 500bhp and a faintly astonishing 730Nm until you back away from the throttle, at which point the engine reverts to a mere 400bhp. In hybrid sport mode the R HYbrid transforms from feeling like an unusually torquey hot hatch into something altogether more incredible, and a whole lot more ridiculous in terms of pure, straight line acceleration. 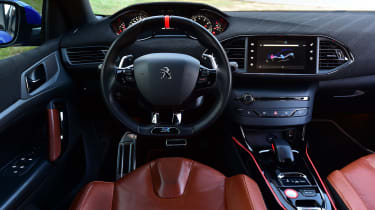 Peugeot Sport claims a 0-62mph time of “less than 4.0sec” with a standing 400m time of 12.2sec, and a standing kilometre time of 22.5sec. Top speed is restricted to 155mph, but in practice the 308 R HYbrid feels a fair bit quicker than even these numbers would suggest. The instant response to the throttle courtesy of the electric motors is fantastic, at any revs, and seemingly in any gear; you always get the same immediate hit of energy – and therefore acceleration – no matter what gear you are in. And it’s a unique experience in a hot hatch. 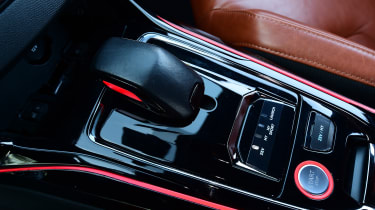 Ultimately this car is all about its powertrain, obviously, but at the same time Peugeot Sport has worked equally as hard – and seemingly done just as good a job – on making the chassis match up to the power and torque. The handling, steering and even the ride of the 308 R HYbrid feel sharp, tidy, polished, composed. The car feels ready to go on sale, in a nutshell, and that’s just what Peugeot should do – before someone else gets there first and steals their thunder.