At last, Peugeot’s stunning new Audi TT rival is here. We give you the behind-the-verdict on the diesel model. 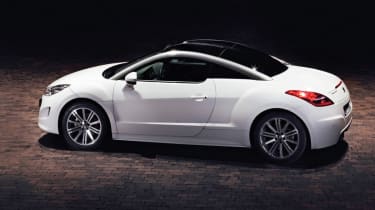 Let Peugeot’s bicentenary celebrations begin – as the firm has come up with a car that’s great to look at and just as impressive to drive. The RCZ offers class-leading mid-corner poise and stability, as well as responsive steering – and our diesel model gave fantastic cross-country pace. Our road test will provide the definitive verdict – and we’ll get an even better idea when we drive the car in the UK. But all the signs suggest that Peugeot has finally produced a model which lives up to the legend of the 205 GTi.

There’s already been plenty written about the new Peugeot RCZ – and not all of it positive. The firm’s reputation has been blighted by lacklustre driver’s cars for more than a decade, so you can understand why.

But before we pick up on past mistakes, let’s get news of the future straight. The RCZ is a revelation. Smooth riding and agile in bends, it’s the finest-handling car Peugeot has built since the legendary 205 GTi – particularly the 200bhp 1.6-litre turbo petrol version assessed by our road testers.

Here we take the wheel of the entry-level 2.0-litre diesel, and even this surprised us with its mid-corner poise and stability – no mean feat along the twisting Spanish roads we drove it on.

Firstly, though, let’s consider the looks. Anyone who has spent the past two years observing Peugeot at motor shows will have been well aware of the RCZ’s shape. The car was first displayed as a concept in late 2007, before being confirmed for production early in 2008.

The wraps came off a roadgoing version less than a year later. As well as a distinctive double-bubble roof and rear window, it features aluminium-effect pillars, plus a bold, cab-forward profile which instantly marks the new Peugeot out as a very different car to its closest competitors.

More importantly, the design gives the RCZ a handcrafted feel. It looks more expensive than its £20,450 price tag would suggest.

On the road, there’s really not much else to rival it for kerbside appeal, and although we feel some of the detailing lacks the upmarket finish of its German opponents, this is a car you will never tire of looking at.

Inside, it’s a similar story.

Our model’s leather-trimmed dash is neatly finished, with contrasting stitching and bright, jewel-like instruments. The large analogue clock in the centre of the dash makes a bold statement on the car’s fashion credentials, while chrome-effect trim adds a touch of sparkle, too.

Everything in the driver’s eye line looks good – but as with too many Peugeots, when you cast your eyes down, there are hard, scratchy plastics which lack the class of the materials used elsewhere. The same is true at the rear of the car, where some mouldings feel cheap and flimsy.

Family buyers should be warned as well. Although it is possible for adults to sit in the rear seats, they’re really only suitable for children – and even kids will find them short on room on longer journeys. The new car isn’t completely impractical, though – the rear bench folds to boost luggage space, and has a useful stowage net to stop things sliding around.

Refinement isn’t bad, either. Our model’s diesel engine proved smooth, with none of the rough idle often associated with such powerplants. In-gear acceleration feels strong, too – the engine’s torque is delivered right the way up to the 5,000rpm red line.

Gearchanges are slick, and the six-speed manual box offers a short throw and a lightness which we found perfectly suited the closely stacked ratios.

The steering was instantly responsive, and the front wheels provided huge amounts of grip. The system was accurate, too, although it lacked the ultimate feel and feedback on offer from class-leading front-wheel-drive cars like the Ford Fiesta.

The Peugeot’s trump card is its chassis, which is capable of absorbing the most challenging surfaces – as well as the fiercest abuse from drivers. It provides controlled, fuss-free progress, whatever you throw at it.

For example, you can brake hard to scrub off speed as you head into a bend without causing the car to wander away from your intended line. Yet enthusiasts should be aware that although the RCZ serves up a beautifully composed ride to match the classic 205 GTi, it lacks that model’s enthusiasm at the limit, as well as its perfectly weighted steering.

So where Peugeot’s original hot hatch was a delight to drive through tight bends, as well as occasionally frightening around fast-flowing corners, the RCZ is the reverse. It revels in high-speed turns, but is left scrabbling for traction when the road turns more sharply.

This is a minor criticism, though. Clearly, Peugeot’s team of chassis engineers has managed to rediscover some of the magic that allowed the company to dominate its rivals back in the late Eighties. We can’t think of a more fitting tribute as the Lion marks its 200th birthday.