The all-electric Porsche Mission E Cross Turismo concept promises 592bhp and 310 miles of range. We take it for a spin... 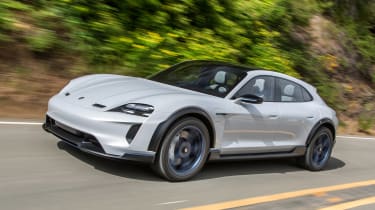 It looks fresh and fancy and based on this first taste it should be fantastic to drive. The cabin is cool and clean and compared to the original Mission E it will be a roomy and spacious car. With the Cross Turismo Porsche is offering an alternative to the SUV and should give Tesla something to worry about.

Porsche has big plans for its future range of electrified cars. Over £5 billion has been invested in the technology, a redesigned factory sits in the heart of Stuttgart and 25 per cent of Porsches by 2025 will be electrified in some way – Porsche is on a Mission and it carries an E. The German firm begins its voyage into the world of electric cars with the Mission E saloon next year, and what we’re driving here, the Mission E Cross Turismo, could well be the second. It’s a concept car that was first presented at March’s Geneva Motor Show and if feedback is good it could well make it into production.

While the original Mission E will be closer to the idea of a sports car, the Cross Turismo could be the answer to the ever-growing demand for SUVs as a fresh and modern interpretation. Appearing as a kind of shooting brake with higher ground clearance and rugged cladding it offers more room for passengers than a Panamera and more boot space than a Cayenne.

Concept vehicles like this are usually pretty fragile, and more for looking at rather than driving. But being a Porsche the Cross Turismo is more than just a pretty face. Handmade wheels mean the car’s 155mph top speed is out of the question but as the concept uses the underpinnings of the production version of the Mission E this is our first opportunity to experience just how a fully electric Porsche feels on the road. 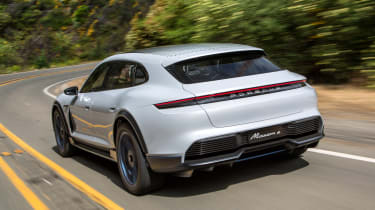 A 90kWh lithium-ion battery drives two electric motors, one on each axle to give four-wheel drive. Combined power is upwards of 592bhp, while an all-electric range of around 310 miles has been promised. The torque delivery is instant and relentless – that translates to blistering acceleration on the straights and cornering speeds that you might expect from a 911. Yes, the car might be a heavy (over 2,000kg), but as the bulk of the weight is mounted as low as possible the Cross Turismo feels glued to the road.

There are no vibrations coming from the engine bay and no sound from the exhaust, and while Chef Engineer Weckbach loves this “Power of Silence” he knows some customers might miss the noise. That’s why his team are working on a solution – but we’ll have to wait a little long to hear it. On first impression, then, Porsche’s engineers have managed to make the Cross Turismo feel much like a Porsche but from a very different set of ingredients.

Driving around the Hollywood hills means the going can be slow at times but that gives us the opportunity to take our eyes of the road and look around the cockpit, which shows the next step of digitalization. Aside from the two control wheels on the steering and the controller for the different drive modes there are no physical buttons in the Cross Turismo. Instead you see a landscape of touchscreens that spreads across the dash and towards the passenger.

Porsche has ditched the gear selector on the centre console and instead moved it to a stalk behind the steering wheel - it takes some getting used to, as it’s a completely new design for Porsche. But some things never change; the rev counter might have evolved to an acceleration meter, but still holds the centre position in the instrument cluster.

Development is almost done for the standard mission Mission E – it’ll be in showrooms by the end of next year. But the Cross Turismo is still awaiting the official green light for production. If Porsche bosses give it the go-ahead it can be alongside the regular Mission E in showrooms rather quickly, as Weckbach says: “Since all technology is packaged in the platform we just have to tailor another hat.”