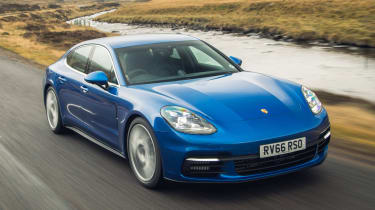 It may be a four-door saloon, but the new Panamera is one of the most impressive new Porsches ever produced. Its breadth of abilities – especially as the diesel – are so broad, it’s unlike anything that has gone before it. It’s eye-wateringly expensive, though, and doesn’t come with all the equipment you might expect at the price – but its blend of performance, economy and luxury will give the Mercedes S-Class customers something to think about.

If you think of diesel, two things that probably spring to mind are fuel economy and the ongoing Volkswagen emissions scandal. But Porsche is now attempting squeeze some performance from one of the automotive world’s most tarnished words – with its new Panamera 4S Diesel.

According to Porsche it’s the fastest diesel on the planet – and this is our first chance to get behind the wheel in the UK. The 4S diesel develops 416bhp and 850Nm of torque from an all-new 4.0-litre twin-turbo V8. It’s paired to an eight-speed PDK automatic gearbox and four-wheel drive, which combine to slingshot the 2.1-tonne four-door saloon from 0-62mph in 4.2 seconds and on to a top speed of 178mph.

The second-generation Panamera is based on the VW Group’s new MSB platform (which will go on to underpin the new Bentley Continental), and is new from the ground up. Its cabin has been completely redesigned, while externally, it now looks like the 911’s bigger brother – something the old model didn’t quite manage. That’s on top of being more practical and fuel efficient, too.

For a diesel, it even sounds good; the deep-chested rumble on start-up later becomes a distinctive V8 bellow as you climb through the revs. Not that you need to, though, as all 850Nm of torque is available from only 1,000rpm. As a result, the Panamera builds speed at a frantic but also effortless rate. 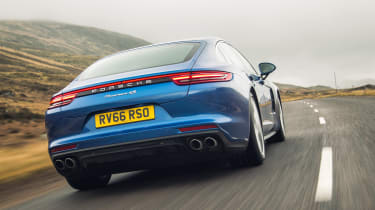 Until standard steel springs become available in the summer, buyers will be forced to cough up an extra £1,541 for Porsche’s adaptive air suspension (PASM). It’s an option worth having, though, given how controlled and composed the Panamera feels at speed. In fact, it makes this the most comfortable Porsche to date.

Even tight and technical Scottish B-roads didn’t fluster the Panamera. Again, despite its sheer breadth, it feels lithe and nimble – especially when the powertrain is in its most aggressive Sport Plus mode. Leave the dampers in their softest setting and the Panamera will flow with the surface of the road while its responses remain sharp.  The steering is its weakest link and stops the Panamera feeling like a true sports car. It lacks feedback despite being well weighted. 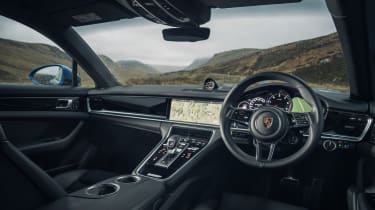 One thing you can’t moan about is the fuel economy: we managed 37mpg on a sensible 110-mile run from Edinburgh to Newcastle, while Porsche reckons 41mpg is feasible.

At over £91,000, however, there are a few goodies you’d expect to fitted as standard: Lane Keep Assist, rear USB connectivity, Four-zone climate control, heated seats and a heated steering wheel being the main culprits. That’s almost £3,000 of extras you’d find on most cars costing half the price. 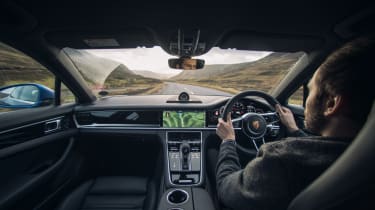 Aside form a few misgivings with equipment the new cabin is a real step forward. A number of logically laid out and touch sensitive buttons replace the old Panamera’s cluttered design, while a widescreen HD display dominates the dash. There are a few gripes: if you want to change the direction of the central air vent, you have to delve into sub-menus to do it electronically, which is rather fiddly on the move. On the whole it is very impressive, offering a preview of how the inside of the new Cayenne SUV will look like next year.

Those in the back will be equally pleased, thanks to acres of legroom and decent headroom. If you’re feeling flush you can even treat them to a set of £2,285 massage seats.