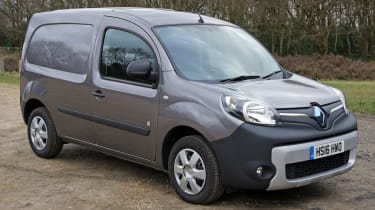 The Renault Kangoo is a no-nonsense van that is one of Europe's best sellers. It's been popular ever since the introduction of the first-generation model in 1997, and while Renault no longer offers a multi-seat MPV version, it still holds plenty of appeal for buyers looking to keep their costs down. The second-generation model was introduced in 2008 and was upgraded in 2016 so that the diesel engine met Euro 6 emissions standards. Of course, you can really cut the cost of tax by choosing the all-electric Kangoo ZE over the standard diesel.

In the UK, Kangoo buyers can choose from Business and Business+ specs, while the Formula Edition is a tie-in with Renault's Formula One program. The Kangoo comes in two body lengths - standard and Maxi. The super-short Compact model sold in Europe isn't available in the UK due to low sales volumes - if you want it, you'l have to go for the short-wheelbase Mercedes Citan instead. There are three dCi diesels on offer - 75, 90 and 110 - although the 75 is only offered with the standard body length, while the 90 and 110 engines can be had with an auto gearbox. Both body styles are available in ZE electric guise.

The Kangoo ZE is available in standard and Maxi length and both feature a 60bhp electric motor that has 226Nm of instant torque, so it feels brisk away from the lights. The 22kWh lithium ion battery pack can be fully charged in less than eight hours from a conventional three-point plug, while other fast-charge points can replenish the battery in as little as half an hour. Currently, Renault claims a range of 106 miles, which means in real-world conditions you can expect a range of around 75 miles on a full charge.

Buyers choosing the Maxi chassis have the option of a crew van, with a folding second row of seats boosting versatility. In addition, standard and Maxi models can be specified with fold-flat front passenger seats, incorporating a folding bulkhead, to extend load-carrying areas beside the driver and make the most of the internal dimensions.

Renault builds the latest Kangoo alongside the Mercedes Citan, although the two vans have unique looks and drive very differently. The Mercedes is more expensive, but is better equipped. However Electronic Stability Control with Hill Start Assist and Grip Xtend are now standard on all Kangoo models.

Renault offers its Euro 6 compliant 1.5 dCi diesel engine in three states of tune in the Kangoo. The 75bhp and 90bhp versions are fitted with a five-speed manual transmission, while the 110bhp model gets a six-speed box. Both the 90 and 110 engines can be had with Renault's EDC auto.

The Kangoo ZE is the full-electric version. It has a 60bhp electric motor and is fully automatic, while energy is stored in a 22kWh lithium-ion battery - although Renault will soon upgrade the Kangoo ZE to the same battery as the ZOE electric supermini. It has a plug socket in the nose behind the blue-tinted Renault badge, and Renault offers the standard multi-pin charge lead, or you can use a three-pin household socket if you're in need of some extra energy, although this is a slower method of charging the Kangoo ZE.

The diesels are very efficient, promising 64-65mpg fuel consumption and emitting between 112g/km and 119g/km of CO2. These figures are on a par with the Peugeot Partner and Citroen Berlingo, and are better than the Volkswagen Caddy and Ford Connect can manage. It helps that all versions of the Kangoo are now available with stop-start technology, and all models, even the ZE, get an Eco button that reduces engine torque to boost energy use by up to 10 per cent.

The Kangoo ZE has a claimed range of 106 miles, although when we tested one, the battery was only good for a maximum range of 75 miles or so. This will vary depending on cold weather, but at least Renault offers the option to pre-heat the cabin at a set time, so you can do that while the van is still plugged in, rather than using the battery to heat the cabin up. 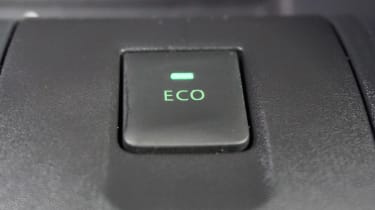 Service intervals are set at an impressive 24,000 miles or two years on all diesel models. Renault has taken the lead in the electric compact LCV market: it offers the standard Kangoo, the Maxi and the crew van in battery-powered ZE form, with zero emissions powertrains. Customers can lease or buy the battery, depending on preference. Service intervals for the ZE are 12,500 miles in the first year, then every 25,000 miles or two years.

The standard Kangoo van has a load volume of 3.0 cubic metres, which is enough space for a single Europallet, while the Maxi can squeeze two pallets in its 4.0 cubic metre cargo space. But a set of fold-flat front passenger seats can be specified to increase these volumes to 3.5 and 4.6 cubic metres respectively. The Maxi crew van offers a 2.4 cubic metre load volume when fitted with a multi-position bulkhead. This grows to 3.6 cubic metres with the rear seats folded. 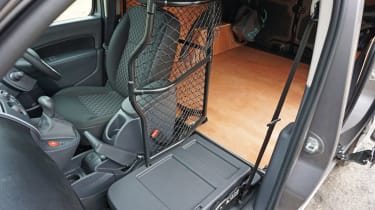 The shorter van can carry up to 650kg, although a £150 optional increased payload pack can be specified to take this up to 800kg. The Kangoo Maxi carries 800kg as standard, and the crew van has a 740kg capacity. But while these figures put the Kangoo in line with competitors like the Peugeot Partner and Citroen Berlingo, the Ford Transit Connect offers a 905kg payload, plus you get a full one-tonne payload in the Fiat Doblo Cargo and Vauxhall Combo.

Further holding the Kangoo back is the fact that there’s no high-roof option – short and long-wheelbase versions of the Doblo Cargo offer two roof heights, which take load volumes up to 5.0 cubic metres. Tubular bulkheads are standard on both Kangoo vans, while there’s the option of full-steel bulkheads and a swivelling bulkhead for the folding front seat. The Kangoo crew van is available with fixed-steel bulkheads and a multi-position bulkhead. 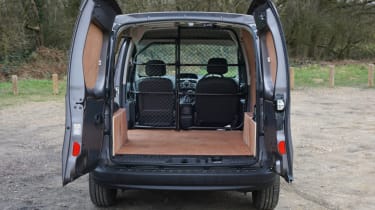 The braked trailer towing capacity stands at 1,050kg for standard Kangoo and Kangoo Maxi vans, plus both body lengths are offered with a range of roof bars and roof racks, capable of carrying up to 100kg. Buyers can also specify load area ply-lining kits, supplied and fitted by Renault, for £141 on the standard van, £151 on the Maxi. Renault also offers complete racking packages under its Ready 4 Work scheme, from £958-£1,333 depending on model and specification.

The Kangoo EV also has a payload of 650kg, although obviously carrying that much weight will have a bigger negative impact on its range.

Other options include rear window protection grilles and rear parking sensors (for Business trim), which can be added for £100 and £230 respectively.

While it’s not intended as an all-wheel-drive system, Grip Xtend will provide extra traction, much like the Peugeot Partner’s ATV Grip Control system. The set-up doesn’t bring additional ride height or grippier tyres, unlike Peugeot’s ATV, or the similar offering on the Citroen Berlingo.

Rear parking sensors are standard on the Business+ models and front passenger and thorax airbags are available as an option. Service intervals are set at a generous 24,000 miles or every two years and the full Kangoo range benefits from a four year/100,000 mile warranty.

The Kangoo ZE has the same four-year warranty, while the battery pack is covered by its own five-year/100,000 mile warranty.

When it was launched in 2013, the Phase II Kangoo brought updated styling inside and out, as well as a quieter, more comfortable driving experience. And even the basic 75bhp 1.5 dCi diesel engine doesn’t feel underpowered, although the 90bhp version provides the best balance of power and fuel consumption, and is the most popular choice as a result.

The 110bhp 1.5 dCi serves up 240Nm of torque, for strong pulling power. This higher-powered diesel is the best choice for drivers covering long distances, as it’s hooked up to a six-speed manual gearbox, which makes for a quieter, more relaxed experience at cruising speeds.

The Kangoo ZE is pretty quick away from the lights thanks to its instant power delivery, although every time you floor the throttle, you can expect the battery range to drop by at least a mile every time. Renault has fitted the ZE with an artificial sound generator that means the van has a space-age whirr at low speeds. This is to alert other road users to your presence, and can hardly be heard in the cabin.

What you are aware of at higher speeds is the amount of road and wind noise generated in the cabin. With no engine drone to worry about, and the steel cage-style bulkhead, the load area resonates with all the thumps and bumps picked up by the suspension, so this is one EV that's nowhere near as quiet as you might expect.

All versions of the Kangoo come with a DAB radio as standard with Bluetooth and USB connectivity. Renault’s R-Link multi-media system with 7-inch touchscreen and TomTom Live navigation is available for £675. The cab provides plenty of storage space, while a height-adjustable steering wheel and driver’s footrest make it easy to get comfortable.

Renault’s R-Link Multimedia system adds a premium feel to the Kangoo– it comprises a central touchscreen, on to which drivers can download a range of apps from Renault to suit their needs, and incorporates sat-nav, with a three-month subscription to TomTom live services. A £350 Tech Pack comprising rear parking sensors, cruise control and front foglights is available, while there are various glazing packs for the Kangoo Maxi.

(Widths are body width without mirrors. With mirrors: 2,138mm)

(Widths are maximum, width between wheel arches is 1,045mm)