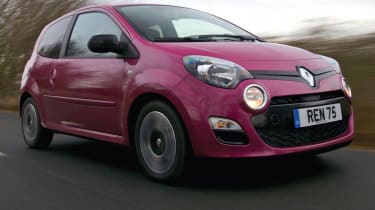 The Renault Twingo is the entry-point to Renault range, if you exclude the all-electric Twizy two-seater. It's a compact car, perfectly suited to the urban streets it’s most likely to be seen in.

Rivalling the likes of the the accomplished Volkswagen up!, Skoda Citigo and SEAT Mii, as well as the more recent Toyota Aygo, Peugeot 108 and Citroen C1, the Twingo is beginning to show its age. A new Twingo will launch soon but that’s no reason to ignore the current model just yet.

The Renault Twingo is not as well packaged as its key city car rivals, and build quality is trailing, too. There isn't much choice contained in the range either. The 1.2-litre petrol is the only option unless you opt for the 131bhp Renaultsport Twingo. It comes with with 74bhp only in Dynamique trim.

Whichever model you choose, though, the Twingo impressively practical for a car of this size with clever rear seats that slide back and forth individually to maximise rear legroom or boot space as required.

Renault offers a single engine in the Twingo: a 1.2-litre petrol four-cylinder. This delivers 74bhp through a five-speed manual gearbox and is well-suited to being used around town. Progress is relatively punchy, but once you get onto wider and faster roads, the Twingo begins to struggle.

With a slow 0-62mph time of 12.3 seconds and a top speed of 105mph, the Twingo feels sluggish and overtaking manoeuvres require planning well in advance. 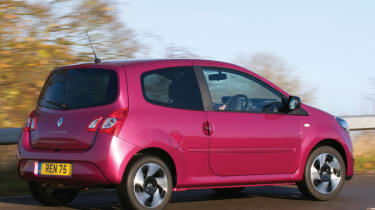 The controls are light and easy to use - perfect for urban driving, but this doesn't inspire confidence when the roads become twisty. There's not enough feedback through the steering wheel and the there's not much grip, either.

For a more exciting driving experience, go for the Renaultsport Twingo. This has 131bhp and promises a 0-62mph time of 8.3 seconds and a 125mph top speed.

It is much more fun to drive than the standard car, with sharper responses on twisting roads. This fun comes at the expense of ride comfort, though, where the larger 16-inch alloy wheels and stiff suspension contribute to an unsettled urban driving experience. The car crashes over potholes and sends shudders into the cabin.

The city car class doesn't feature many diesel cars, but rivals such as the Volkswagen up!, Skoda Citigo and SEAT Mii all manage to achieve marginally better fuel economy from their 1.0-litre three-cylinder petrol engines.

Renault claims 60.1mpg fuel consumption for the Twingo Dynamique, but this is still some way off the likes of the Volkswagen up! in BlueMotion Technology spec. A CO2 figure of 108g/km is competitive, though.

Buyers considering the Renaultsport version will be happy to put up with less impressive green credentials, but running costs elsewhere should help compensate for this.

The Dynamique models sits in insurance group nine, which, again, isn’t as good as the best of today’s city car crop. Service intervals are long - at 18,000 miles, and Renault offers a four-year/100,000-mile warranty as part of its comprehensive 4+ aftersales package. This also covers servicing and insurance, and Renault dealers are known for offering tempting finance deals.

The Twingo has been kept up to date with various revisions over its lifespan, with the latest iteration featuring Renault's new family look.

A prominent diamond badge and oversized headlights make for a striking front end, with Dynamique models featuring 15-inch alloy wheels. Gloss black wing mirrors and body-coloured bumpers to add to the car's sense of style. There’s a good range of colours to choose from as well.

As with many cars in this class, the Twingo is available with a range of personalisation options for the exterior - consisting of bodywork stickers, spoilers and alloy wheels. However, the same scope for personalisation isn't continued into the interior, where the Twingo trails its rivals.

Unlike rivals such as the Fiat 500 and Vauxhall Adam, Twingo buyers have to make do with large swathes of black plastic trim across the cabin. There's a leather steering wheel and gearknob, but the rest of the standard equipment list is sparse with air-conditioning, a CD player with Bluetooth, USB and an auxiliary socket, but not much else.

The Twingo makes the most of its three-door, four-seater layout inside. The two individual rear seats slide back and forth, depending on your needs for more rear legroom or greater boot space. Luggage capacity ranges from 165 to 285 litres, depending on where you position the rear seats. 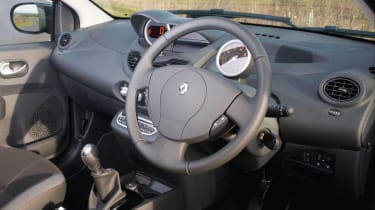 If, however, the rear seats aren't in use, they can be folded to create a 959-litre load space which is impressive in a car as compact as the Twingo. Meanwhile, in the front, both models feature electric windows and mirrors and a height-adjustable driver's seat.

The latest raft of city cars can be had with a host of safety features that are available from several classes above. This is where the Twingo shows its age, as it trails rivals with a four-star Euro NCAP crash test score. The Volkswagen up! and Fiat 500 achieved the maximum five stars, proving that compact dimensions don't have to mean compromises in safety.

Basic features such as ESP are not standard on the Twingo Dynamique - unforgivable for a car often bought for first-time drivers. This essential safety feature is standard on the Renaultsport version, however.

Not enough owners have taken part in our Driver Power customer satisfaction survey for the Twingo to feature, but Renault came an average 15th place in the manufacturer ratings.