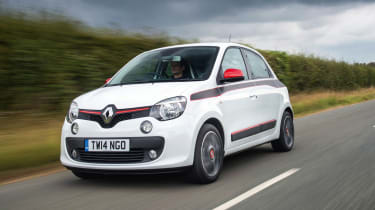 The Twingo is a solid four-star car with its thoughtful packaging and superb manoeuvrability, but this turbo version has to be marked down for polluting a likeable package with tricky steering. If its performance advantages were greater or its open-road manners more refined, it may have been a different story. But as it is, the turbo Twingo you’ll really want is the forthcoming GT warm hatch, in lieu of a true Renaultsport flagship.

Can less really mean more? With the new Renault Twingo, it certainly can. The most expensive and more powerful model actually has a marginally smaller engine than the entry-level version – 0.9-litre plays 1.0-litre – and it’s this range-topper that we tried on UK roads for the first time.

The 89bhp 0.9 TCe, related to the engine used in the Clio and the Captur, outpunches the 1.0-litre unit by virtue of a tiny turbocharger assisting its three rear-mounted cylinders. But while the turbo Twingo (which commands a £700 premium) has an extra 20bhp and 44Nm of torque, it isn’t the superior version.

There are two reasons why, and the first is the engine. While it does feel stronger than the naturally aspirated version, the usual gratifying surge of in-gear torque we’re treated to from, say, Ford EcoBoost engines, isn’t present.

Away from a standstill, the extra power is noticeable, but hardly a hoot. The noise is inferior to the less powerful model’s, too. You still get a rorty three-cylinder bark over your shoulder, but it’s overlaid with a whiney turbo whistle.

No doubt, if you want a city car that’s more adept on flowing out-of-town roads, the TCe-engined Twingo is easier to carry higher speeds. But if you want a good out-of-town city car, a SEAT Mii or Skoda Citigo is the answer thanks to their vastly superior refinement, not to mention the more stable body control.

It’s no surprise that Renault has engineered out every hint of rear-drive adjustability from the Twingo’s chassis, and over rougher surfaces the 89bhp car can get out of step and flustered. Its extra power lightly triggers the traction control when the body starts to float over bumps. This cuts the power suddenly and makes for jerky progress. 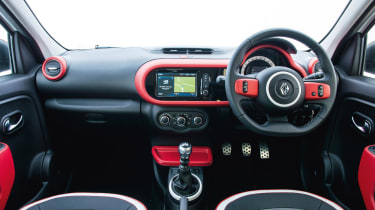 Meanwhile, you won’t just save at the showroom with the less powerful Twingo; it’ll also be slightly cheaper to run – offering 67.3mpg to the turbo’s 65.7mpg – although CO2 emissions for both cars dip below 100g/km.

The second issue is that in the more powerful Twingo, you get a variable steering rack ratio as standard. Renault pitches it as an advantage, meaning less nervous steering at high speeds and quick manoeuvrability in the urban jungle. Instead, the steering just feels inconsistent, and while you get used to its changing behaviour, the 1.0-litre’s regular steering demands no compromise – so why change it?

Fortunately, due to the engine being well out of the way under the 188-litre boot floor, the front wheels pivot by up to 45 degrees to offer a truly remarkable turning circle.

The Twingo, then, conforms to that most cliched of French car stereotypes – at its best when kept simple, cheap and cheerful.