We hit the road in the SEAT Ateca, but does it have the tools to compete in the competitive crossover class? 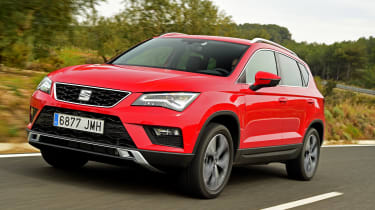 It has taken SEAT long enough to bring the Ateca to life, but that decision to be methodical appears to have paid off. Given SEAT’s lack of experience in the SUV market and the incredibly high standard this car wades into, the Ateca is certainly fit for the fight. It’s spacious, fun to drive and stylish, and comes at an incredibly competitive price. Hold off on that Qashqai order until you’ve tried one of these.

Put simply, the Ateca is probably the most important car SEAT has ever produced. Why? Well, this new crossover aims to hit the high-selling Nissan Qashqai exactly where it hurts. SEAT wants a slice of that lucrative and increasingly popular market, but has the Ateca been worth the wait?

First impressions are positive. The design may not be the most daring, but when you already have a handsome hatchback in the shape of the Leon, stretching it in every direction and putting it on stilts isn’t a bad idea at all – and it works.

Defined bodywork, chunky bumpers and strong stance, visually it ticks all of the boxes. One of the best looking cars in its sector? It’s certainly in with a shout. 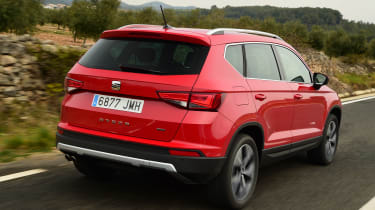 Building your first SUV is a daunting task for any manufacturer, but fortunately SEAT has been able to call upon its friends over at VW for assistance. The Ateca shares a heap of its DNA with new Tiguan, although the SEAT is marginally shorter because it sits on a slightly different version of the MQB platform – sharing its underpinnings with the existing Leon.

You have to sacrifice a little in terms of boot space, with the Ateca’s 510-litre storage area (485 litres in four-wheel drive models) losing out to the Tiguan’s 615 litres. Having said that, the SEAT still trumps the Qashqai and Renault Kadjar, which trail with 430 and 472 litres respectively.

Engines and gearboxes are carried over from the Tiguan too, which means turbocharged TSI petrol and TDI diesel engines ranging from 115bhp to 187bhp, with either front-wheel or all-wheel-drive, mated to manual or dual-clutch DSG transmissions. Unlike the Tiguan, however, you can get a tiny 115bhp 1.0-litre three-cylinder TSI engine in the Ateca which means prices will start just under £18,000 – the Tiguan looks likely to come in at £23,000. 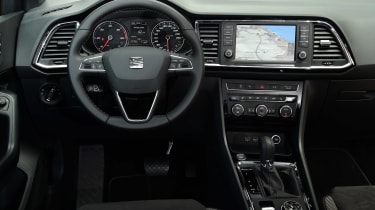 What we have here, though, is the most powerful 187bhp 2.0-litre diesel, paired with a seven-speed DSG and four-wheel drive. In the mid-spec trim we have here (final UK specs are yet to be finialised) it’s likely cost in the region of £25,000. But it’s worth bearing in mind it is an early pre-production model, with right-hand drive versions not due until September.

On the road it feels solid, composed and up to the challenge. Unlike the Tiguan, there is no option of adaptive dampers, but various driving modes selectable via the swivel wheel on the centre console alter throttle response, steering weight and gearbox severity. The steering is light but consistently weighted, while Sport mode gives a far more heft and sense of accuracy without feeling overly artificial.

The ride is unaltered whichever mode you have it in, though. It can feel a little firm at times but it’s never uncomfortable – it’s a trick SEAT manages to pull off with most of its cars. As a result, you get well judged body control without that roly-poly sensation you often find in slab sided SUVs. SEAT says this sporty character is what marks it out from rivals; did someone say Ateca Cupra? 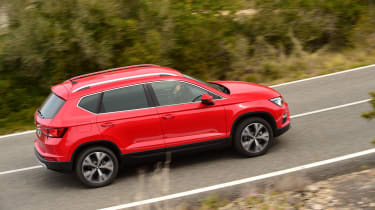 Performance is strong, too. The 2.0-litre diesel pulls hard from low revs and the seven-speed gearbox is precise and smooth with its changes both up and down the ratios. It’s not the quietest diesel engine and can sound a bit clattery at lower speeds, but it soon settles at a cruise. As an alternative, those covering lower mileage should look at the 148bhp 1.4-litre four-cylinder turbo with cylinder deactivation.

Technology and connectivity is another area where the Ateca scores a hit. It’s the first SEAT to be fitted with wireless phone charging, while an eight-inch touchscreen and suite of smartphone connectivity options such as Apple CarPlay, MirrorLink and Android Auto will keep the tech-savvy happy.

It does miss out on a few features you can get on the Tiguan, namely the 12.3-inch digital readout behind the steering wheel, but given the gulf in price something had to give. The rest of the interior will be familiar to anyone who has been in a Leon, VW Golf or even a Polo. It’s incredibly user friendly, logically laid out and will be a breath of fresh air to those accustomed to the Qashqai’s rather fiddly infotainment system. 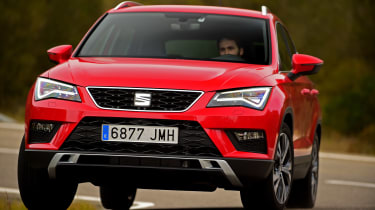 You shouldn’t get many complaints from those in the back either. It may be shorter than the Tiguan and Kadjar, but the Ateca will swallow a family of five and all associated paraphernalia without any fuss. There’s huge amounts of head room and the 60:40 split rear seats drop in a second via a paddle in the boot but they don’t lie flat – leaving a noticeable step between the bench and boot floor.

Overall, though, a few minor niggles don’t detract from what is a thoroughly impressive piece of kit. And being so aggressively priced will give those at Nissan and Renault a real headache.