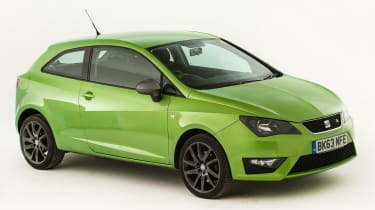 This year marks eight years since the SEAT Ibiza Mk4 was launched in the UK, but despite its age, regular facelifts and revisions have kept the car desirable and competitive. Its modern, eye-catching design, reasonable prices, strong dynamics and low running costs mark it out in the class.

The Ibiza makes a brilliant used buy, especially for new drivers, who will be reassured by its five-star Euro NCAP safety rating. But this sharply styled supermini is also just the job for anybody who needs something fun and distinctive for the daily commute – whether it’s on the motorway, around town or anywhere in between.

The SEAT Ibiza first hit the market in 1984, and has been through four generations to date. The Mk4 was released in 2008, and it’s this most recent model that we’re looking at here. 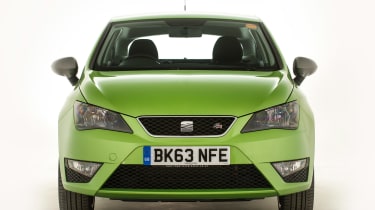 The five-door Ibiza Mk4 arrived in July 2008 in 1.2, 1.4 or 1.6-litre petrol forms; within four months, the three-door SC was on sale. Diesel 1.4 and 1.6-litre engines debuted in March 2009, four months before the 178bhp 1.4 TSI Ibiza Cupra. The mechanically identical Bocanegra, with its distinctive black nose, arrived in September 2009. The 1.2TDI Ecomotive appeared in July 2009, a year before the ultra-practical Ibiza ST, the Ibiza E Ecomotive and the zesty 1.2 TSI.

Manual and DSG transmissions are great to use, while the TSI and TDI engines feel punchy and offer decent economy; the regular 1.2 and 1.4 don’t sparkle as much. Entry-level S editions are best avoided, as they don’t offer a lot of kit. 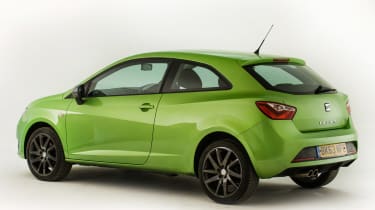 E spec is just as poorly equipped. These models come with remote central locking and a six-speaker CD/tuner, but you have to move up to the SE to get electric front windows, a trip computer, split folding rear seats, 15-inch wheels, ESP and a height-adjustable passenger seat. The Sport features firmer suspension, sports seats and 16-inch alloys. Options worth having include climate control, Bluetooth, rear parking sensors and the excellent Portable System Live removable multimedia.

Alternatives to the SEAT Ibiza Mk4

The Skoda Fabia and VW Polo share the Ibiza’s underpinnings, but there’s no estate version of the latter, while prices for an equivalent hatch are higher. One of the best all-rounders is the smart-looking Ford Fiesta, which is great fun to drive, well equipped and cheap to run, plus there’s a wide choice of engines and trims.

The Renault Clio and Peugeot 207 are also worth a look, as they’re affordable and good to drive. Vauxhall’s Corsa is also cheap to buy and run, plus it comes with lots of kit and offers a decent amount of cabin space. Less obvious (but excellent) alternatives include the Hyundai i20 and Kia Rio, along with the Honda Jazz, which offers superb reliability with unrivalled practicality. 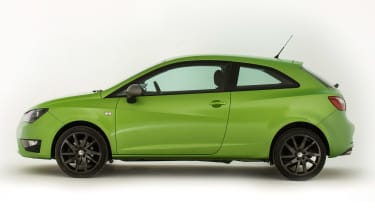 Air-conditioning systems can be temperamental, so listen for hissing and see if the system produces cold air, as repairs can be costly.

The electric windows are known for being unreliable, with motors shorting out leading to the mechanism going up or down of its own accord – or refusing to move. 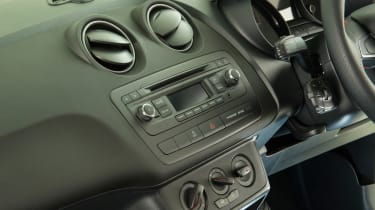 Creaks, squeaks and rattles are far from unusual in the Ibiza, and the same goes for jammed cup-holders. These can be replaced easily without visiting a garage.

The rear windscreen washer mechanism occasionally stops working, often because the pipe that feeds it has come adrift, filling the boot with water.

Some of the interior plastics are disappointing (things improved with the 2012 facelift), but the dash design is smart and the seats are comfortable, although rear seat space is tight. The five-door Ibiza’s boot can accommodate 292 litres; the SC cuts this to 284, or 847 litres with the rear seats folded. 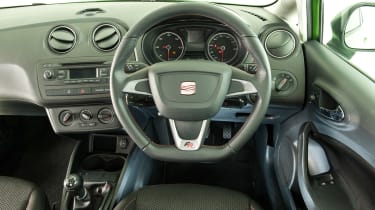 The costs are identical for petrol and diesel cars, and they apply to any Ibiza Mk4, regardless of age. The brake fluid has to be replaced after three years then every two (£49), while all engines have a cambelt that needs to be renewed every four years or 80,000 miles. Expect to pay £329 to replace the belt on a petrol model, or £399 on a diesel. Add another £130 for a fresh water pump. Book online, and you get free roadside assistance for a year.

There have been two recalls for the Ibiza Mk4. The first was issued in June 2012 affecting cars built between April 2010 and November 2011. There was a problem with the latch mechanism, which could prevent the bonnet from closing properly and lead to it flying open.

The most recent recall was in December 2014 for 1.2-litre diesel Ibizas made from May 2010 to October 2014. These could suffer from the fuel filter cracking and leaks. There was no danger of the vehicle catching fire, though. 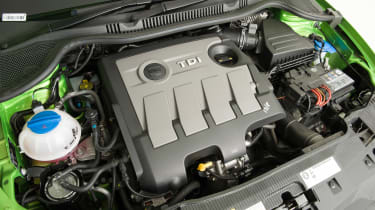 The Ibiza is starting to show its age, as there are newer, more talented superminis now on the used market. But that doesn’t stop SEAT’s supermini from being a great used buy, as you get a lot of car for your money.

It helps that there’s a wide range of models to choose from – from practical estates and fun sports editions such as the FR and Cupra to the frugal Ecomotive car.

It’s not the most spacious or dynamic car in the hatchback class, but as an all-rounder, the Ibiza should be on the shortlist of anybody looking for a small car that’s fun to drive and cheap to run.