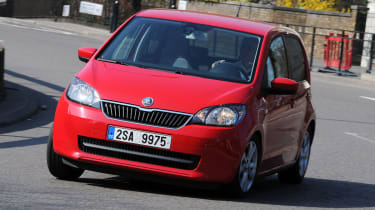 The five-door Citigo offers value and practicality in spades. It’s inexpensive to buy and run, but by no means does it feel cheap and nasty. This is a well made, fun-to- drive and smart looking car. It’s missing some of the VW up!’s better styling cues, but if you’re not fussed about that, then it’s a better-value buy than its VW sister model.

We tested the new Skoda Citigo five-door on winding foreign roads in February, but this car was designed for cities. So where better to try it in the UK than the cut-and-thrust of central London traffic?
Our SE Green tec test car looks striking in Tornado Red, while the black and grey interior trim is simple yet smart. It has comfortable seats and there’s enough room for a six-footer.
Video: Watch CarBuyer's video review of the Citigo
[[{"type":"media","view_mode":"content_narrow","fid":"69346","attributes":{"alt":"","class":"media-image"}}]]
The navigation system is one of this car’s most talked-about features, and it’s a clever device. Its touchscreen clamps into a mount that slots into the top of the dashboard. This means it’s well positioned for quick glances while driving and easily removed by pushing a button. There’s even a slot in the glovebox for storing the screen away from prying eyes.

Our test car had the lower-powered 59bhp version of the Citigo’s 1.0-litre three-cylinder engine, which provides plenty of grunt for town driving. It can sound a little rough at idle when cold, but after a few minutes it’s so smooth you can barely tell it’s running. There’s still a hint of the distinctive three-cylinder engine note, but it’s a pleasant yet faint roar, not an intrusive groan.
Put your foot down and there’s sufficient power for lane changes and traffic tussles, but progress is slowed slightly by a somewhat notchy gearshift. Handling is very entertaining, thanks to accurate steering that offers plenty of feedback. But the Citigo is just as accomplished at tackling a cobblestone mews in London as it is on a rural B-road: its comfortable ride means you won’t spill your coffee.
The soft suspension allows for a playful amount of body roll when cornering enthusiastically, but sometimes it’s almost too soft. While you won’t slide out of your seat, you have to be cautious over speed bumps or you’ll scrape the front bumper.
But this is a small price to pay for a car that’s fun to drive yet still returns a claimed 68.8mpg and emits 96g/km of CO2. Those figures come courtesy of our car’s Green tec additions, which include stop-start and special low-rolling-resistance tyres.
So the Citigo is frugal and fun to drive, but is it also practical? The short answer is yes. There’s enough room for adults to sit front and back, thanks to the space under the front seats for the rear passengers’ feet.
The back seats fold flat with a 60:40 split, while there are map pockets up front, along with a console that features a clever cup-holder and space for the largest smartphones. There’s even a shopping bag hook on each side of the boot.
In mid-range SE specification, the Citigo comes with 15-inch alloys, air-con, electric windows and mirrors, plus electronic stability control. But it’s the basic design of the car, rather than any individual features, that really impresses.
It offers no-fuss value for your money and is unapologetically practical. The Citigo shines when driven on poor-quality UK roads, and this underlines its everyday appeal. If it can succeed in the hustle and bustle of London, it can succeed anywhere.