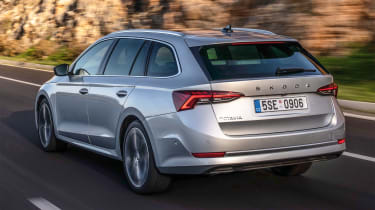 Well done, Skoda. The Czech company has grabbed the latest VW Group technology and built an ultra-modern and desirable estate car, and one that is the largest in its class. Skoda has made small improvements in every area, and in combination they result in a car that should remain at the top of its segment. UK pricing and specs are still being finalised, so while this is an impressive package, there’s likely to be better value found elsewhere within the range.

If there’s one car that you associate with Skoda, it’s the Octavia. The model has been around for 24 years, and even today, one in three models that leaves a Skoda showroom is an Octavia. So when a new one comes along, it’s a big deal.

This is the fourth-generation model, and before we get into the details of what it’s like to drive, let’s take a second to go over what’s changed and what hasn’t. As before, it’s based on the same underpinnings as the Volkswagen Golf, called MQB Evo. It’s 50mm wider and three millimetres taller than before, but that is largely down to the new bodywork and styling rather than any physical adjustment to the platform itself. That means it retains all of the Octavia’s trademark practicality traits, but we’ll get to them in greater detail later.

While under the skin it’s all quite familiar, on the outside the designers have certainly been busy. To our eyes the Octavia is a far more handsome and upmarket car than before; sharper surfacing and the more intricate head and tail-light designs give the Mk4 a sense of quality it was perhaps missing in previous generations. 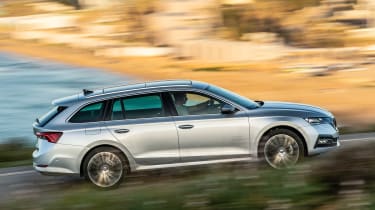 The model we have here is an Octavia Estate in flagship First Edition guise. Under the bonnet is the VW Group’s familiar 148bhp 2.0 TDI diesel, which is paired to a seven-speed DSG gearbox. There is no official word on UK pricing, but in Germany such a model is going to set you back 34,770 Euros (£32,655).

Climb inside, and the Octavia’s upmarket feel is reinforced in the cabin. Everything is well thought out; the wide touchscreen doesn’t have a rotary control for the volume, but a slider at the bottom, like that in the Golf. You just slide your finger across it – loud to the right, quiet to the left. The rest of the buttons are mounted above the air vents, so they are almost invisible. The automatic gear selector from the Golf frees up a lot of space in the console, where you can easily put your phone behind it and have it charged inductively. Digital dials sit behind a new-look, two-spoke steering wheel, which adds another layer of quality. So far so good.

We’re testing the Octavia in Prague, Czech Republic, where the roads are a little bumpy and not too dissimilar from those in the UK. Here we found that the Comfort setting on the Octavia’s adaptive DCC suspension really takes the edge off some harsh imperfections in the road. The Octavia absorbs bumps and ruts and remains a pleasant companion even on long undulating stretches. Extra soundproofing makes it even more refined at speed. 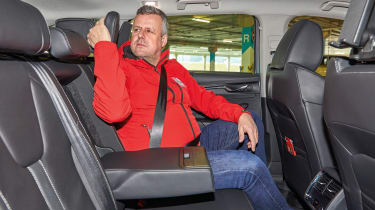 The engine’s 360Nm of torque means there’s a reasonable amount of punch, which is more than enough for a family car like this. Everything else, such as the chassis, steering and gearbox tuning, we already know well from the Golf, and the car feels solid and precise.

There is a range of driving modes including Eco, Comfort and Sport. The latter increases the weight on the steering and amplifies the exhaust note. But in truth, you’re best off putting the car into Comfort mode and forgetting about it. This is where the Octavia works at its best, with fluid body control, light and accurate steering, and a real sense of composure.

Where the Octavia really comes into its own is with the level of practicality that it offers. With an external length of 4.69 metres and so much space, the Octavia is in a different league from any of its rivals against the tape measure. In fact, it’s almost as large as cars in the class above, such as the Audi A4 Avant (4.7 metres), only with a much larger boot for a smaller price tag.

The boot itself is 640 litres in size – 30 litres more than before – and it comes with a useful split-level floor to hide away any valuables. Space in the rear seats is, as you’d expect, excellent. Sitting three adults in the back, even those above six feet tall, isn’t a problem either. Once again, Skoda delivers where it matters most.