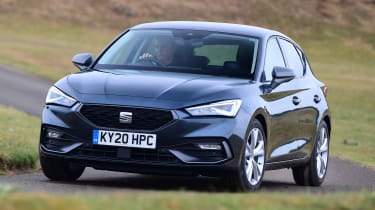 Existing Leon owners will find plenty to like on the new-generation car. But dynamically not a lot has changed here, and that means much of the car’s appeal will come down to how much cheaper it is than a Golf. With that in mind, sporty FR trim has never been our sweet spot in any SEAT range, and there’s not really anything on the new Leon that’s going to change our mind on that. We look forward to trying an SE Dynamic for a better mix of value and comfort on UK roads.

It’s fair to say that SEAT has never been in better shape. But it’s equally valid to suggest that this is down to the trio of SUVs that have arrived in recent years, because the Arona, Ateca and Tarraco took the Spanish brand to countless new customers.

Don’t forget the Leon, though. SEAT’s family hatch was one of the brand’s first hits under Volkswagen Group ownership, and the model made a useful leap with its third generation back in 2012, adopting the MQB platform architecture and a slightly rakish look that set it apart from its stablemates, the Skoda Octavia and VW Golf. Now it’s time for a fourth generation of Leon to build on that success and push SEAT towards fresh sales records – and we’ve had a chance to drive one in the UK and rate its chances.

Anyone familiar with the Leon should see enough of the model’s DNA in the Mk4’s styling. There’s a different treatment around the front and a longer wheelbase, but overall the profile is reassuringly familiar. At the rear, there are more pronounced shoulder lines, helped by sharp tail-lights that are joined by a single ‘light beam’ that gives you an animated greeting when you unlock the vehicle.

We’re not here to tell you whether or not it looks good, but to our eyes the Leon is certainly a) clearly a SEAT and b) distinctive enough in a crowded class.

The new model line-up starts with a 1.0-litre three-cylinder petrol engine, but the bulk of the range will be covered by a 1.5-litre four-cylinder, badged TSI Evo. It’s available in three specs: 130PS (128bhp) and the 150PS (148bhp) in regular and 48-volt mild-hybrid specifications. Oh, and there’s also a 2.0-litre 114bhp diesel that will no doubt sell in unfairly tiny numbers. 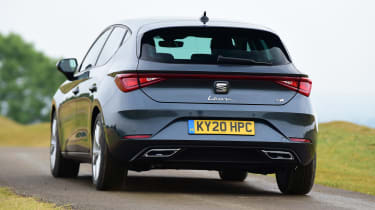 An even more focused FR Sport edition will follow, along with more luxury-inclined Xcellence and Xcellence Lux versions, plus a 148bhp diesel and at least one plug-in petrol-electric hybrid.

We’re driving the more modest 128bhp 1.5 TSI Evo here in FR trim and with a six-speed manual gearbox. It’ll cost you £23,515 if you’re one of the small number of people who pay list price – but the monthly figures that more of us will use are an interesting part of the equation, as we’ll discover later.

On the move, the Leon will feel reassuringly familiar to anyone with recent experience of a Mk3. In some respects that’s good; the four-cylinder engine has a fairly drony note, but it’s generally refined enough, and SEAT’s engineers have kept -–or even enhanced – the steering response around the straight ahead. If the brief was to make the Leon’s responses feel sharper than the latest Golf (and it may well have been), then it’s broadly been achieved, but the difference is only small. The FR stays pretty flat in corners, too, with that slightly lower, firmer set-up keeping body roll well in check.

That doesn’t mean that this spec is entirely happy on UK roads, however. The Leon’s chassis hasn’t really changed all that much, so it still thunks into deeper potholes and allows the ripples of manhole covers to get through to the cabin too readily. There’s road noise as well, although it’s not too intrusive.

Either way, the wheel size isn’t smaller on SE Dynamic, but we’d still be hopeful that its extra suspension travel would give the car a marginally more tolerant nature.

It’s worth remembering that at launch the Leon does without the more sophisticated multi-link rear suspension; all models feature a more basic torsion-beam configuration at the back, which might be more easily unsettled by nearside imperfections.

Inside, there are sharp angles and creases on the dashboard that aren’t exactly homely but do ooze sophistication and sportiness. The infotainment screen is well positioned, up high, and it’s crisp enough and pretty quick at responding to inputs. Some users might find that SEAT’s operating interface takes a little getting used to, though. 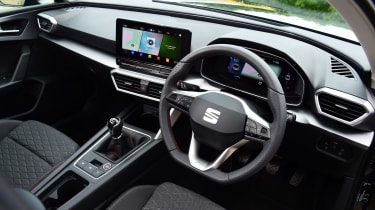 The digital instruments are clear and easy to read, although the display panel itself looks a little small in the binnacle – as if the space was designed for larger conventional dials. The (standard) digital set-up in the new Golf is better integrated, we’d say.

There is a slight step up in quality over the outgoing Leon, but it’s not enough to really lift the car above the likes of the Ford Focus. There are soft-touch materials in most of the right places, but you don’t have to look too far to find hard plastics. A quantum leap over the Mk3 it is not.

The same can be said for practicality. Boot space remains a useful but hardly cavernous 380 litres, so SEAT clearly shares VW’s view that this is the ideal capacity for a family car, while Skoda will disagree. There are useful cubbyholes in the Leon, though, including a deep charging tray for large smartphones.

The longer wheelbase does give the SEAT a bit more rear legroom, so the new Leon offers even more space and therefore comfort compared with its predecessor.

You’ll have surmised by now that this Leon feels almost like a hefty cosmetic facelift of the Mk3, instead of an all-new generation. And that means its key appeal could continue to be based on its value for money.

But in the case of this FR, it’s not exactly cheap. SEAT’s launch offer lets you off with zero deposit, but you’ll be paying £363 a month over a long four-year contract. You’ll find better deals on the Focus, Vauxhall Astra and even the latest VW Golf that will trump this, so SEAT may have to start playing harder on finance offers if the Mk4 is to find its place.