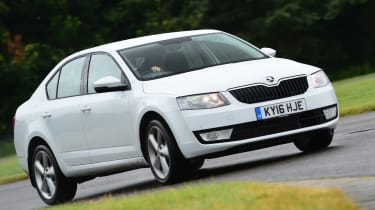 The Skoda Octavia has always been a great no-nonsense hatchback with loads of space at a good-value price. The new 1.0-litre engine in this model injects a touch of fun to the driving experience, while also remaining cheap to tax. It’s not quite enough to make the Octavia an exciting ownership proposition, but there’s no doubt that it’s still a great car.

With the engine downsizing trend in full swing, it’s no surprise to see the VW Group’s tried and tested 1.0-litre three-cylinder is now available in the Skoda Octavia. What might come as a surprise is that it’s actually a great choice, despite being such a small engine in such a big car.

The little three-cylinder under the bonnet produces 113bhp, which isn’t much in a car like the Octavia. But the 200Nm of torque is very impressive for a 1.0-litre unit and actually makes the engine very useable in normal driving.

That torque, which comes in low down the rev range, means there’s enough punch to keep up with traffic both at low speeds and on the motorway. It does start to feel underpowered if you push a bit harder, with the 0-62mph time of 9.9 seconds hinting at its performance - or lack of, as the case may be. 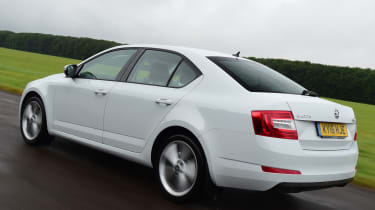 That’s not to say it isn’t fun, though, as the plucky three-cylinder sounds charming and despite being a touch unresponsive on the throttle it likes to be revved. It’s quiet in the cabin too, so the pleasant buzz from the engine isn’t intrusive even when you push on.

The six-speed manual in the car tested here is the one to have as well. It’s a quality box, with a light lever and a smooth action that makes changing gear satisfying. The familiar DSG dual-clutch auto is available for an extra £1,250.

It’s a shame that the CO2 figure of 104g/km couldn’t dip under the 100g/km barrier, but it’s still cheap to tax – both as a private buyer or a company car driver. Plus, with 62.8mpg claimed, this little petrol could well be cheaper to run than a diesel version if your driving habits allow.

The lighter engine up front means it feels a bit more agile than other models in the Octavia range, though the difference is marginal. The steering is a bit too light, but combined with the smooth gearbox and comfortable driving position the Skoda is a very easy car to drive. This is a car set up to be comfortable rather than brilliant to drive, and while it’s not bad in the bends, cars such as the Ford Focus EcoBoost are better suited to spirited driving.

Where the Octavia has the Focus beaten, however, is when it comes to practicality. There’s loads of space inside too, both in the front and in the back, as well as a cavernous 590-litre boot with the seats up. Drop the rear bench and you’ll find 1,580 litres of space, which is a huge space for a car in this class. Load it up to the top and the 1.0-litre engine might start to struggle, though. 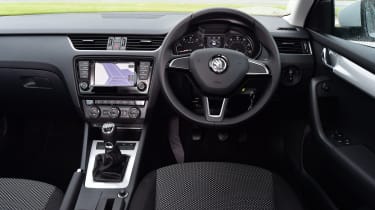 Unfortunately the 1.0-litre Octavia is only available in S and SE trims, which means inside it feels a little basic. The grey cloth seats, dark plastic surfaces and uninspiring design means the cabin feels rather dull compared to more modern rivals like the Renault Megane.

Our car featured a decent amount of kit, but features such as heated seats, sat-nav and the smart-looking alloy wheels were all on the options list. Still, we’d argue those are decent boxes to tick - though £800 for the sat-nav might be a bit much considering how cheap and talented standalone units are now.