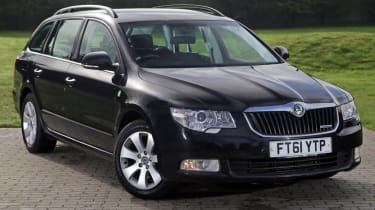 When Skoda started to work with the VW Group in 1991, the Czech firm was the butt of endless jokes. No one could understand why one of the world’s slickest car makers would team up with a manufacturer from the other side of the old Iron Curtain. But the partnership has been an incredible success at every stage.

Nowhere is this more evident than with Skoda’s biggest and plushest car, the Superb. Borrowing a name first used by the company in the thirties, the first modern-day Superb (launched in 2001) was impressive, but the Mk2 (from 2008) was even more so, with its mix of VW quality, market-leading value and the most spacious cabin in its class, all backed up by a great dealer network. 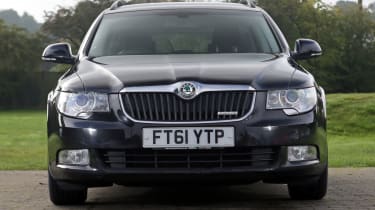 The same engines were available in the estate, introduced in February 2010; at the same time the 2.0 TDI 140 diesel received common-rail fuel injection to improve refinement and economy. In August that year, the 1.9 TDI GreenLine made way for a 1.6 TDI GreenLine.

A diesel Superb is the perfect cruiser, but if you do mainly short journeys, go for a petrol model to avoid diesel particulate filter (DPF) problems. If you’re buying to tow, a four-wheel-drive model is ideal, while the DSG auto box is lovely to use. 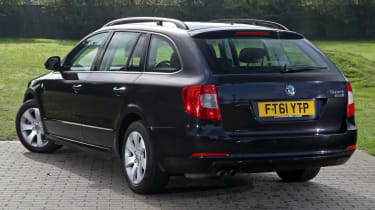 Alternatives to the Skoda Superb Mk2

To enjoy similar cabin space to the Superb, you need to be in the executive segment, which means cars such as the Audi A6, BMW 5 Series and Mercedes E-Class – all of which cost much more.

Price-wise, the closest rivals to the Skoda are large saloons, hatchbacks and estates such as the Ford Mondeo, Toyota Avensis and Vauxhall Insignia, all of which have less interior space.

If you’re looking for an estate, the Volvo V70 is a spacious car that’s also very safe and well built, on top of which it represents good value as a used buy. Don’t overlook the Volkswagen Passat, either: this is related to the Skoda, but is more expensive and less roomy. 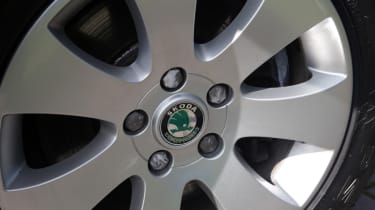 All Superbs have alloys, but some corrode beneath the lacquer. Dealers often replace these under warranty.

Skoda badges can corrode noticeably. The only fix is to replace them; some have been done under warranty.

There is no spare as standard, just a repair kit. A full-size spare usually fits in the well, though, depending on spec. 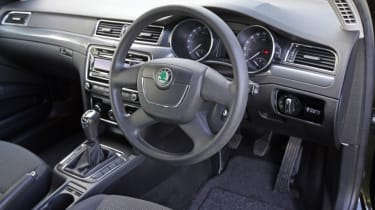 The Superb is incredibly spacious inside, particularly in the rear, with a clearly laid out, solidly constructed and well equipped cabin. Five-doors have a ‘Twindoor’ rear end, allowing the bootlid to be opened either in a regular saloon fashion or as a full hatch tailgate, giving access to the vast 1,670-litre boot with the seats folded. Estate models can stow a massive 1,865 litres.

Superb owners can choose fixed or variable servicing. A car with the latter is much cheaper to run; the fixed intervals are every 12 months or 10,000 miles, but variable servicing can double this to two years or 18,000 miles. Either way, check-ups alternate between minor and major, priced at £159 and £279.

Diesels have a cambelt that needs replacing at between 90,000 and 140,000 miles or four/five years depending on engine; budget £389 for this.

Replace the brake fluid and service the air-con every two years, budgeting £54 and £79 respectively.

First of all, some 1.6 TDI and 2.0 TDI engines are included in the VW Dieselgate scandal. You can check if a potential buy has been updated on the Skoda website. 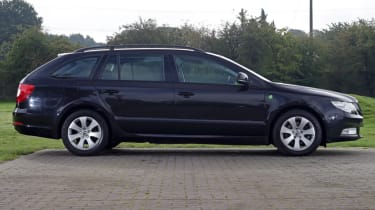 DSG Superbs built from September 2008 to August 2009 were called back in December 2009 due to drive being lost; a software update fixed this. And examples with the 2.0 TDI engine made from January 2009 to December 2011 were recalled for possible fuel leaks.

Fourth place in our Driver Power 2017 used car satisfaction survey underlines the Skoda’s breadth of talents. These are highlighted by first place for practicality, second for interior and comfort, plus third place for safety features. The lowest score of 24th was for exterior finish – still better than the Audi A4 and BMW 3 Series.

The Superb lives up to its name; it’s no wonder owners love it. The car topped our Driver Power satisfaction survey in 2011 – one of four consecutive podium finishes. We’ve handed it a raft of other trophies, too, including Best Family Car and Best Estate three times in a row at our annual New Car Awards. The only fly in the ointment for some will be the Superb’s size; unless you’re using it as a family car it’ll probably be too big. It’s 484cm long, so you’ll need a large garage to accommodate one of these king-sized Skodas. Still, the generous dimensions ensure excellent stability when you’re towing, while the massive boot and cabin mean you’ll never be short of carrying capacity.