Does a 1.4 petrol make sense in the big, comfortable new Skoda Superb? 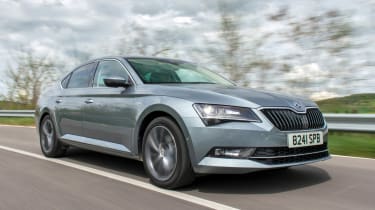 The new Superb not only looks and feels fantastic, inside and out, but delivers refinement to match cars twice its price. That’s especially true with this 1.4 TSI model that costs £900 less than the similarly-powered diesel, is more hushed on the move and costs less in tax for company car buyers. It could do with tighter body-control in the corners, but you’ll never tire of the massive boot and generous interior space.

While the new 148bhp Skoda Superb 2.0 TDI we drove last week is the obvious choice, and the predicted best-seller for UK buyers, this 148bhp 1.4 TSI model could make more sense for many. Not only is it smoother and quieter to drive than the diesel, but it attracts the lowest benefit in kind tax rate (18 per cent) of the entire range, so company car buyers that don’t cover massive miles will be quids in.

There is an even cheaper 123bhp 1.4 TSI engine only available in entry-level ‘S’ trim, but it’s actually less efficient, thanks to some a clever cylinder deactivation system on the more powerful model driven here. By shutting down two cylinders on light throttle loads (you know when ‘2-cyl mode’ is active via the digital display in the middle of the instrument cluster, but you won’t feel the switch over) it returns fuel economy and CO2 emissions of 57.7mpg and 115g/km in the manual version we drove. 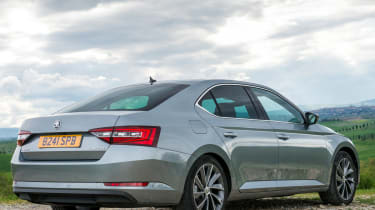 When the engine’s firing on all four cylinders, it’s not short of performance. There’s a short pause when you floor the throttle, followed be a satisfying surge of acceleration that sustains all the way to 6,000rpm. At idle you can barely hear that the engine’s on, and even at motorway speeds it’s a distant whisper.

We praised the DSG auto ‘box previously for its telepathic decision making, seamless shifts and for adding an extra notch of sophistication to the experience, but sticking with the manual isn’t much of a compromise. The chunky lever slots between gears with the minimum of effort, in keeping with the Skoda Superb’s easy-to use ethos.

Our test car was fitted with optional three-stage adaptive dampers, which are probably an extravagance too far. There’s a marked difference between Comfort, Normal and Sport modes – the first two are comfortable in a straight line, but struggle to control the body movement in bends, and while Sport is a definite improvement it’s a bit brittle on crumbling surfaces you find all too often in the UK. We suspect that fixed-rate damper option, pitched somewhere in the middle, will be just fine, considering the Superb is a car that’s about refinement and comfort, not high-speed cornering. 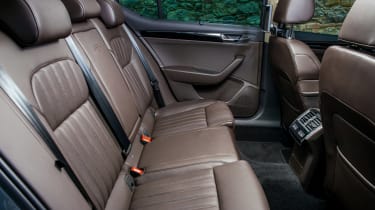 Point the Superb down a long road, though and it eats up the miles, cocconing its passengers in pillowy softness and shielding them from the road, engine and wind noise outside. Rear passengers have a particularly sweet deal with legroom to rival a Mercedes S-Class and more head and shoulder room than the previous model, thanks to the new MQB-based Superb’s expanded dimensions. The boot is cavernous, too, at 625 litres expanding to 1,760 litres with the rear seats folded down.

Our test car was in SE L Executive trim, one below the range-topping Laurin & Klement model but above S, SE and SE Business. It misses out on the 10-speaker sound system, tri-zone climate control, lane assist and boot opening system by waving your foot under the rear bumper you get with L&K, but in reality it has all the luxuries you need to make the most of the Superb’s premium driving experience, including leather seats, top-spec eight-inch sat-nav and powered rear hatch.