Brabus has produced thigh-performance versions of Smart's ForTwo and Roadster 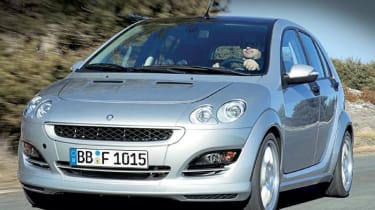 With the help of Brabus, Smart has created its first hot hatch. A potent powerplant plus a capable chassis make the range-topping ForFour an entertaining mix of refinement and fun. Honda's Civic Type R delivers more thrills and MINI's Cooper S may be cheaper, but if you need pace and practicality, Smart could have the answer.

When Brabus produced the high-performance versions of Smart's ForTwo and Roadster, it was clear the German tuning firm was better at making hot Mercedes than super city cars.

But that hasn't stopped Smart from handing over its ForFour for a once- over. The result is the fastest Smart ever, but can it avoid the crashy ride and niche market image of the firm's previous Brabus-badged models?

Losing none of the charm of lesser variants, the new range-topping For-Four gains a beefy bodykit and 17-inch alloy wheels without looking vulgar. Other exterior detail changes include a mesh grille and chrome exhaust pipes.

Inside, Brabus has gone to work on the practical cabin, too. Alongside the additional badges and metallic trim, there's also leather trim for the seats and classy hide over the dash. The overall effect is to give the versatile five-door an upmarket feel, but it's out on the road where the flagship model will have to win over buyers.

Even with the low-powered engines which have made up the ForFour line-up until now, the chassis shared with Mitsubishi's Colt has shown plenty of promise. Brabus engineers have lowered the front suspension by 30mm and the rear springs by 28mm to give a stiffer set-up, but the most significant modifications are under the bonnet.

A tuned version of the 1.5-litre turbo-charged unit used in the hot Colt CZT produces an impressive 177bhp - and eye-opening performance. With a trans-mission designed for strong acceleration from standstill, the 0-62mph sprint takes a highly competitive 6.9 seconds, while the in-gear pace gives plenty of punch for overtaking.

Drive the ForFour along a twisty road, and it's clear that the chassis engineers have done their job, too. While poor weather meant that our test models were fitted with winter tyres - unlike the ForFour pictured here - the upgraded Smart still proved to be more than simply a gimmick. Some drivers will want more feel through the steering, but the car turns in sharply and is more than capable of raising a smile.

While it doesn't have the manic char- acteristics of Honda's Civic Type R or the Renault Clio 182, the Brabus does offer more grown-up fun. Insurance ratings are yet to be confirmed, but it's expected that the newcomer will be cheaper to cover than MINI's Cooper S.

What's more, the ForFour delivers impressive fuel consumption. Driven carefully, the Brabus model is said to return 41.5mpg, although few owners are likely to match that in real world motoring.

Bosses are still deliberating over the price, but the latest Smart is expected to cost around £17,000. That's £1,820 more than the Cooper S. However, once the MINI's options list has been raided, the difference will soon shrink.

This ForFour has practicality on its side and is a far more rounded package than any previous Smart Brabus offering. But it's only likely to be a really big hit with those who want to stand out from the crowd.