It hasn't taken long for us to get over our grief... the little red Roadster has gone, and in its place is an altogether more grown-up Smart 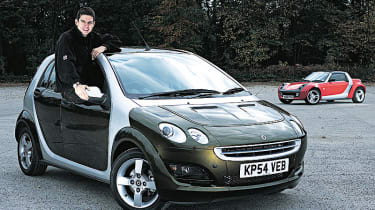 It hasn't taken long for us to get over our grief... the little red Roadster has gone, and in its place is an altogether more grown-up Smart. Over the past couple of months we've been getting to know the larger, more practical ForFour. But can it fill the boots of its much loved predecessor? Having put in a good performance in both first drives and road tests, it's now time to see how the ForFour stands up to 12 months of the toughest motoring in Britain. As a member of Auto Express's long-term fleet, it will spend most of its time in London's cut-and-thrust traffic, while being pressed into long-haul trips at a moment's notice. With a list price of £11,370, our 1.3-litre For-Four Passion looks reasonable value, but like most Smarts bought in the UK, ours has had several options fitted. Externally, the only non-standard feature is the distinctive £275 metallic paint, but inside KP54 VEB has the £395 Comfort package, which includes extras such as the neat Twinface armrest. This can be used in the front or the rear. And there's adjustable lumbar support for the exceptionally comfortable front seats. To keep occupants happy on long trips, we've invested in an upgraded CD player - costing £240 - and a £170 multi-function steering wheel to give the driver easy control. In fact, there's rarely any need to take a hand from the wheel as our Smart also has £240 paddleshift gear selectors to go with the £375 six-speed automated manual gearbox. The finishing touch is an £80 three-headrest rear bench upgrade, taking the grand total to £13,145. The Smart feels like a well equipped and stylish car for the money, and even with all its extras it still cost less than our Roadster, and seems far more substantial. Much of the interior switchgear is borrowed from sister company Mercedes, and as a result the quality of the materials used is first rate. One problem, though, is the lack of a parcel shelf. Leaving luggage visible through the large glass tailgate is tempting fate, and has proved a real bind. Smart claims a shelf will be available soon, so hopefully by the next report our baggage will be hidden from view. We're also having trouble with the doors. Not only are the panel gaps wide, but they need a real slam to shut them properly. This is because they are so light, which contributes to the ForFour's lowly 975kg weight. However, keeping an eye on the scales has also allowed Smart to produce an economical car. Our average lies at 37mpg, but on long motorway trips the ForFour returns well over 40mpg. Performance is less impressive, with the 95bhp unit often leaving the driver wanting more torque and refinement. The jury's still out on whether or not we have the right gearbox, too. The sequential manual is smoother and quicker than that of the Roadster's, and certainly in keeping with Smart's philosophy, but we still think a conventional manual is just as easy to use. This has become more apparent because Smart has engineered a 'creep' function into the sequential transmission. When in traffic too much torque goes to the front wheels, so you have to brake hard to stop the car from crawling forward. These niggles aside, the ForFour has made a decent first impression, and with five seats and good fuel economy it makes a sensible everyday car. However, is that the point of a Smart? Given the inspirational ForTwo and wacky roadster, surely it should be more quirky and unusual? We think Smart might have missed a trick.