Listen carefully... our Smart has an undiagnosed illness. The ForFour is been getting noisier by the day. 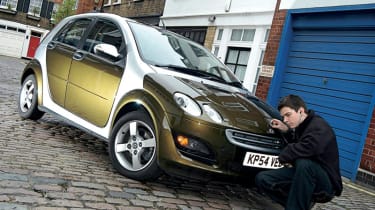 Listen carefully... our Smart has an undiagnosed illness. During its six months with us the ForFour has provided nearly 8,000 miles of reliable motoring, but it's been getting noisier by the day. The problem happens at speeds over 30mph, when a low-pitched humming can be heard above the engine note. It sounds to us like a wheel bearing or exhaust manifold glitch, but Smart's own technicians couldn't find any fault. We left the ForFour at the company's Brentford after-sales centre in west London for a day, but despite thorough investigation, the car had the mechanics flummoxed. Following our insistence that there was an unwelcome noise, three engineers took a test drive, but reported no problems. As I remain convinced that I'm not imagining things, the only solution is for us to return to the London base with the car and drive out with a technician to flag up the sound as and when it occurs. Although staff have been as helpful and as accommodating as I could wish, this means taking time off work and is an inconvenience that I hoped would have been avoidable. Another problem the Smart developed was irritatingly squeaky brakes. As luck would have it, the fault had resolved itself by the time we came to taking the car to Brentford. However, technicians were happy to check out the discs and pads anyway, and gave them a clean bill of health. So has life with the ForFour been nothing but a headache? Thankfully, none of the Smart's ailments has had any effect on performance or economy. In fact, counting the cost at the pumps has become a thoroughly satisfying task. The consumption figure from the last report (issue 831) has been bettered by 14 per cent, with the ForFour now returning a penny-pinching 42.2mpg. Unfortunately, the 95bhp engine has to be pushed hard to deliver swift acceleration, and I still can't get on with the semi-automatic gearbox. In making its trademark transmission more user-friendly by incorporating an auto-style creep from stationary and smoother changes, Smart has compromised driver involvement. Around town, however, where sporty handling is hardly a priority, passers-by have more time to admire the ForFour's eye-catching design. I love the distinctive deep-green colour, and the bodywork is packed with interesting shapes and surfaces that set the ForFour apart from the norm. However, for now at least, the Smart's mystery illness has taken the shine off life with the car - check out future long-term updates to see if we can get to the bottom of the problem. Chris Thorp Second Opinion I understand what Chris means about the gearbox, but it's much smoother than the transmission used on the ForTwo. There are fewer jerky upshifts and, although it's much less involving, the sequential box seems to suit the brand's quirky character better than an ordinary manual. The glass roof makes the cabin light and airy, while the whole car has a style that the platform-sharing Mitsubishi Colt lacks. I just hope the mystery noise doesn't mean bad news. Dean Gibson, sub-editor