Though competent, the Auris is found wanting against the class leaders in every department. 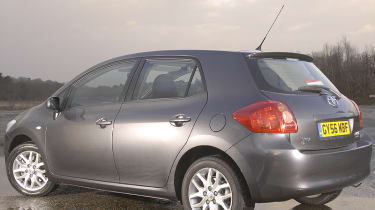 Driving The Auris uses a brand-new platform, and the stiff bodyshell has enabled the company to make the most of this new suspension set-up. Initially, it seems firm - roll is minimal through corners, and the whole car is tightly controlled. As a result, the Auris is rarely caught out, and that means it's reassuring to drive. It can't match the Focus's sparkling chassis and soothing road manners, despite being equipped with Toyota's most positive gearshift since the Celica and offering well weighted, if uninformative, steering. It weaves under hard braking, too. But the hatch is a big step forward over the Corolla it replaces nonetheless. Best-selling engine by far will be the 1.6-litre petrol. With variable timing on both inlet and exhaust valves, it's one of the most powerful 1.6s in its class, yet the unit doesn't make much of an impression. A light kerbweight and good aerodynamics help acceleration, but so does short gearing. We also found it odd that Toyota chose not to fit a sixth ratio. Running at high revs on motorways and featuring only average sound insulation, it isn't the most relaxing companion. Which is a shame, given the impressive ride. There is an interesting aside, though; the T180 flagship, which uses an impressive-sounding 175bhp 2.2-litre diesel, features a bespoke multi-link rear suspension set-up. It does a fine job of keeping the back in check, and grip levels are also high. Sadly, there's still to much body roll under committed cornering for the T180 to be considered a proper hot hatch.

Marketplace Styled in Europe, the Auris is a completely new model that replaces the long-running Corolla. It's new from the ground up, and is offered in three-door or five-door hatchback guises, with a choice of two petrol engines and three diesels. Trims follow Toyota's regular naming policy, but include a 'special value' TR model, based on the T3 and offering a £1,000 saving. The Auris is built in the UK, boasts nine airbags and a five-star Euro NCAP rating, and really is all-new from the ground up... it's just a shame Toyota's played it so safe with the styling. European buyers like bold design, and aside from a chunkier, Yaris-style nose, the proportions and profile are barely changed from the Corolla's. As a result, the Auris is rather anonymous. It doesn't stand out alongside bolder rivals such as the Honda Civic, Nissan Qashqai and Renault Megane, not to mention the Ford Focus, Volkswagen Golf and Vauxhall Astra.

Owning The Auris's dimensions don't break any new ground, but the roof is the tallest in the sector. That's allowed the packaging experts to mount the rear seat relatively high without penalising headroom. Legroom is more modest, with only 720mm of knee clearance, but at least the Auris has a flat floor all the way across. The 354-litre boot is also average - in fact it's the same story with the packaging throughout. The Toyota offers nothing new. The driving environment is braver - chiefly because of the 'bridge' running down from the tidy centre console. This allows the gearlever to be placed high, with a sleek handbrake behind it. However, it also means there's precious little accessible storage, as the centre bin has been placed so far back. To compensate, owners get a large double glovebox, but the upper lid is flimsy. In fact, we found no evidence to support Toyota's claims that the Auris has Golf-rivalling materials. The door trims, instrument binnacle and leather steering wheel don't feel very special. Typically for a modern car, the A-pillars are intrusive, and seats are set too high for taller drivers. Prices are generally keen but the T180 seems poor value; we'd hoped for more considering its £19,000 list price. Retained values are only average too, while models without six-speed gearboxes suffer from poor motorway economy. 10,000-mile service intervals are short by class standards, too.