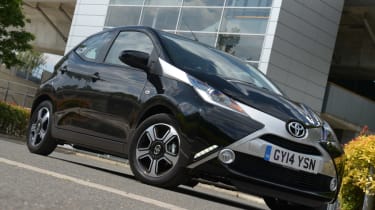 Toyota claims the Aygo’s striking face is inspired by manga comics. Whatever’s inspired it, the baby Toyota is certainly bold, with sharp creases, eye-catching angles and an impressive double-bubble roof. The old car was massively popular and sold in huge numbers – and the new model is an improvement in nearly every way.

Underneath the bold exterior lies an updated version of the platform that underpinned the old car, so there’s not a whole lot that’s new in terms of driving. That means that while the body rolls around corners and the gearshift is fairly notchy, the car has a supple ride and a willing, eager engine with a thrummy soundtrack.

Light and accurate steering makes the Aygo a doddle to drive around town and even easier to park – something aided further by the colour reversing camera that’s standard on all but the base trim.

The real winner in the upgrade has been fuel economy, as the manual Toyota Aygo returns 69mpg – amazing figures for a petrol engine, even on such a small car.

However, the Aygo just isn’t as polished as some of its rivals – and a tight back seat and tiny boot mean it can’t compete in this crowded sector.