We were impressed by the hatchback version, but does the Toyota Corolla Saloon work as well? 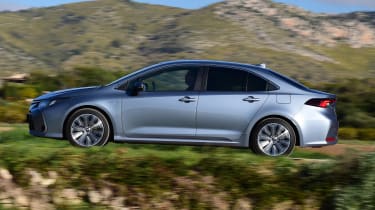 The Toyota Corolla Saloon looks like a niche offering in a market in love with hatchbacks, estates and SUVs. But it is a coherent, well-resolved proposition that deserves to do well in its admittedly small class. Its generous kit list, strong refinement and hybrid running costs should attract plenty of existing Avensis owners, for starters - but we’ll be a little surprised if its price advantage over the Prius doesn’t stretch the Corolla’s reach beyond that minicab-heavy customer base.

The new Toyota Corolla Saloon is a left-field offering from the Japanese brand, given how few cars of its kind are sold in the UK. But there’s method in the apparent madness.

It turns out that at the point when Toyota killed off its Avensis in 2018, it was still shifting around 4,000 examples to British buyers every year. Now the company hopes that the Corolla saloon can at least partially fill the void.

It looks promising enough. The saloon sits on the longer of the two Corolla wheelbases, so it should offer the same slightly larger rear cabin as the Touring Sports estate. It’s the same price as the hatchback, to the penny, and in the UK at least, it’s available only as a hybrid - a powertrain never offered on the Avensis.

It does miss out, however, on the ‘built in Britain’ tag that will be no doubt plastered over the hatch and wagon in Toyota’s UK dealerships. That’s because the saloon, a car created predominantly for buyers in Russia and eastern Europe, is made not at Burnaston, but in Turkey.

It’s a neatly styled thing in any case, with different bumpers, headlights and tail-lights, and oddly, an extra shade in the colour palette (metallic grey, if you’re asking). It’s offered in the lower three of the Corolla range’s four trim levels - Icon, Icon Tech and Design - and the priciest version has a semi-purposeful stance on its larger 17-inch wheels.

There’s decent space up front for two adults, but while the wheelbase delivers decent knee and legroom for those in the rear seats, the swoopy roofline doesn’t do much for headroom. It’s here, perhaps, where the Corolla’s smaller origins are most cruelly exposed against larger family saloons like the Volkswagen Passat and Ford Mondeo.

The boot capacity is comfortably larger than the Corolla hatchback’s, however, at 471 litres. But, of course, the loading aperture is more compromised for larger items and there’s no scope to lower the rear seats to open up the load bay. It’s a decent space, though - enough for a couple of proper suitcases along with a pair of laptop bags. 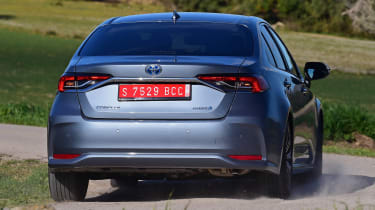 The saloon, incidentally, is not being offered with the more powerful 2.0 hybrid that you can get in the hatchback and estate. But the latest version of Toyota’s 1.8-litre hybrid has 120bhp, and is enough to take the saloon from 0-62mph in 11 seconds; acceptable, but no more than that. Yet Toyota reckons that with a light approach to the throttle, the car could manage as much as half of its urban mileage without using any petrol at all - a factor that may have real appeal for minicab drivers.

On the official economy tests the saloon emits just 77g/km or 83g/km of CO2 on 16-inch and 17-inch wheels respectively, giving it a useful advantage on company car tax over the likes of the Mazda 3 Fastback, the Hyundai i30 Fastback or even the Audi A3 Saloon.

It is fair to say that the saloon rarely feels brisk, and hard acceleration requires patience, because a heavy right foot will kick the hybrid powertrain into emergency mode and send the revs (and noise) soaring. However, once you’re up to speed, the engine settles down pretty nicely; glance down at the rev counter at 70mph and you may be surprised, in fact, at how often the engine cuts out altogether.

On the flat, and at a steady motorway cruise, it seems happy enough at barely 1,000rpm – and at that, the engine is smooth enough to be barely noticeable at all. There’s a little wind noise from around the side mirrors, but the most noticeable factor at speed is probably the transference of tyre roar up through the chassis. It’s far from unbearable, though, making the Corolla saloon a relaxed cruiser.

The experience is less accomplished on twistier roads, but this is down to the hybrid powertrain more than deficiencies in the chassis. The Corolla stays pretty composed in corners, in fact, despite the extra metal beyond the rear axle. You’ll reach the limits of what the CVT gearbox is happy to do long before you tire of the car’s willingness to turn in and resist body roll. While it is composed, driver engagement is not this car’s strong point. 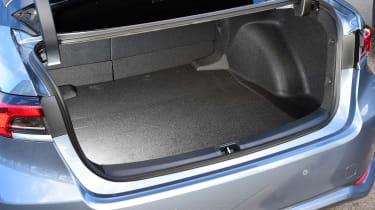 The cabin is pretty much identical to those of the hatchback and estate. That means a decent grade of finish on the facia, with soft-touch materials almost everywhere you’re likely to prod on a regular basis. Build quality feels more than up to three years of ownership abuse, too.

Sadly, the saloon also gets the same infotainment system as the hatch, which is clunky to use, prone to freezing altogether and devoid of the sort of smartphone connectivity (Android Auto or Apple CarPlay) that buyers find really useful.