Does new GT 86 coupe finally give Toyota a sports car contender? We hit the road to find out 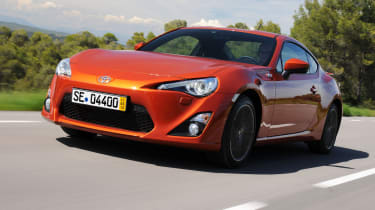 It’s been a long time since Toyota had an exciting car in its line-up, but that’s all changed with the GT 86. Although it lacks the outright performance of rivals and has a dated cabin, this is forgotten as soon as you drive through a series of corners. On this showing, the agile and engaging Toyota is one of the sports car bargains of the year.

The Toyota GT 86 is the car keen drivers have been waiting for. Ever since its debut as a sleek concept at the 2009 Tokyo Motor Show, this coupe has become one of the most anticipated models of the decade.
Developed in partnership with Subaru, the GT 86 has gone back to basics in an effort to deliver undiluted and affordable driving thrills. With its traditional front-engine and rear-wheel-drive layout, low kerbweight and eye-catching £24,995 price, it has all the right ingredients to succeed. So does it live up to the hype?
It certainly looks the part. With its long nose, low roofline and short tail, the GT 86 has classic coupe proportions. Racy touches include an aerodynamically tuned tailgate spoiler, ‘double bubble’ roof and huge twin-exit exhausts. It’s not as sleek as an Audi TT or as muscular as a Nissan 370Z, but has plenty of visual appeal.

Inside, the GT 86 is less impressive. The busy dashboard design already looks a bit dated, while there are far too many hard and shiny plastics, giving the cabin a slightly low-rent feel. And the cramped rear seats can only really be used by small children. Yet the driving position is perfect and the high-backed, figure-hugging seats are extremely comfortable.
Press the starter button, and the 2.0-litre flat four fires into life with a purposeful burble. Drivers who are used to torquey turbocharged diesel and petrol engines will find the naturally aspirated 197bhp engine feels a little gutless at low speeds.
Get the revs above 4,000rpm, however, and the Toyota pulls strongly all the way to its 7,400rpm red line – although this relatively narrow powerband means that you will have to make plenty of use of the precise, but slightly clunky, six-speed manual gearbox.
The star of the show is the Toyota’s chassis. Engineers have worked hard to achieve near-perfect weight distribution, with the result that the GT 86 is beautifully poised when threaded through a series of bends.
The meaty steering is full of feedback, while the use of low-rolling-resistance tyres from the Toyota Prius means that the car’s excellent handling balance can be explored at relatively low speeds.
When you factor in the growling exhaust note and the progressive brakes, it’s hard not to be won over by the GT 86. On a twisting back road, few cars at any price are as entertaining or engaging.
The Toyota even makes a decent case for itself as a daily driver. If you can live with the sluggish response at low revs and the cheap cabin, then you’ll discover a firm but comfortable ride, loads of standard kit and a well shaped 243-litre boot.
Share this on TwitterShare this on FacebookEmail